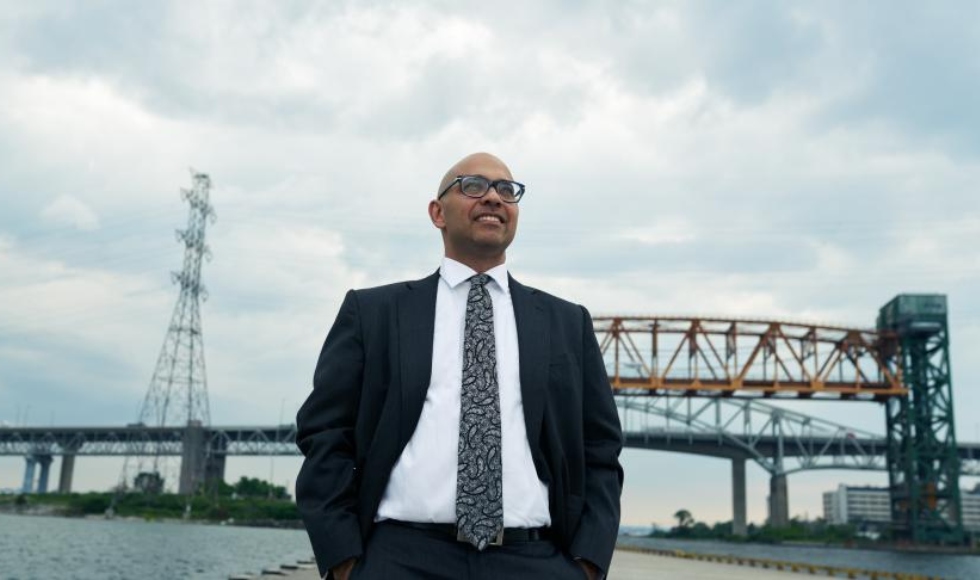 Wael El-Dakhakhni is a professor in the department of civil engineering and the McMaster School of Computational Science and Engineering. Photo by Jin Lee.

First, they’re collecting data on how – and how soon – other countries like China, Italy and the U.S. put in place “non-pharmaceutical interventions” to reduce the spread of the novel coronavirus. These interventions include closing schools, closing airports and borders, and requiring people to stay home.

Then, the team inputs the data into their machine learning algorithms to predict how many people will be affected, and where, based on historical data and Canada’s interventions to date.

“If we can learn which interventions caused an increase or decrease of COVID-19 cases and fatalities elsewhere, we can use this to inform decision-makers in Canada what could happen in the future – and with what measures in place,” says El-Dakhakhni, who is a professor in the department of civil engineering and the McMaster School of Computational Science and Engineering.

While it’s impossible to predict the future with certainty, El-Dakhakhni says the data-driven models are critically important tools to guide strategies to reduce risk to Canada’s systems.

“Let’s say, we can see that tomorrow’s [COVID-19 cases] will not be so different from today’s – then maybe we can give some physicians a break or take time to reorganize a hospital’s structure,” he says. “But if we see that we’re going to have 500 more patients over the next two days, then we know with some degree of confidence that we can’t afford to do this right now.”

El-Dakhakhni and his team of PhD students are also working on complex system modelling to understand how to make Ontario better equipped to handle potential issues, like a mass power outage.

“Our systems are all connected,” he says. “We’re modeling Ontario’s critical infrastructure systems and looking at what can happen if one system goes down – how can we then make our city systems more resilient?”

They’re working with the City of Hamilton on a long-term project to create a “digital twin” of the city. Scenarios can be tested on the digital version of the city before they’re implemented to see its broad impact. El-Dakhakhni says his plan is to eventually create a digital twin of Canada by going “one city at a time.”

At the same time, one of his PhD students, Eman Rezk, is using data from Twitter and sentiment analysis to scan the public’s opinion amid the COVID-19 crisis.

On March 13, one day after Hamilton’s first confirmed COVID-19 case, Rezk’s analysis highlighted “trust” as a key sentiment, likely because of different perceptions of official announcements and news related to COVID-19. In her scan the following week, she found sentiments related to “fear” and “sadness” had skyrocketed.

“It will hopefully let us know what important factors to consider later on – if you’re trying to forecast the number of future [COVID-19] cases, perhaps what people are saying and how they’re feeling can play a major role,” says Rezk.

El-Dakhakhni says his team’s focus is to look at the masses.

“Even if you make a small change in one of our interconnected system, can have a very positive effect for a large percentage of the population,” he says.

“When you can improve these large systems – energy, transportation, hospitals, schools, cities – you can really have an effect on an entire nation.”