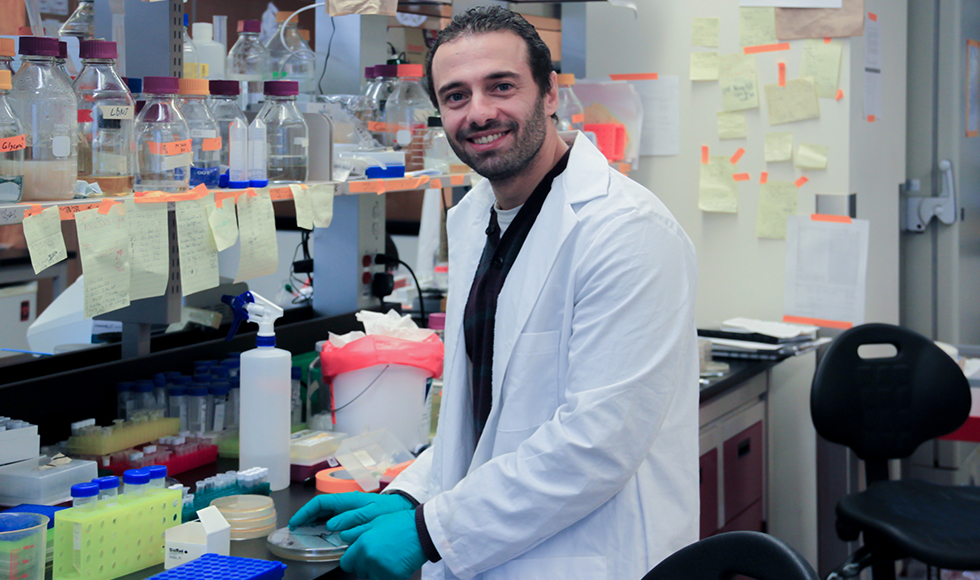 Postdoctoral fellow Wael Elhenawy, above and researchers from the Coombes Lab at McMaster have identified a strain of bacteria often found in the intestines of patients with Crohn's disease. (Faculty of Health Sciences photo)

Investigator Brian Coombes said his team identified a strain of adherent-invasive E-coli (AIEC) that is strongly implicated in the condition and is often found in the intestines of people with Crohn’s disease.

“If you examine the gut lining of patients with Crohn’s disease, you will find that around 70 to 80 per cent of them test positive for AIEC bacteria, but one of the things we don’t understand is why,” said Coombes, professor and chair of the Department of Biochemistry and Biomedical Sciences, and the Canada Research Chair in Infectious Disease Pathogenesis.

“We believe that AIEC is a potential trigger of Crohn’s disease.”

Researchers from McMaster and Harvard University made the discovery by mutating every gene in a particular strain of AIEC and testing how these mutants grew in mice. This enabled scientists to pinpoint which genes allowed the bacteria to freely colonize the gut linings of people with Crohn’s disease.

AIEC bacteria grow in a biofilm that coats cells lining the intestinal wall, protecting them from both the immune system and antibiotics. The team identified a critical protein structure on the surface of the bacteria that lets them grow in biofilms.

Coombes said Crohn’s disease is caused by the immune system’s inability to “switch off” its inflammatory response to gut bacteria. Symptoms include severe diarrhoea, fatigue, weight loss and malnutrition.

Current treatments focus on easing the inflammation, but do not address the root cause of the condition.

“New therapies are on the way – we are one step closer to figuring out how this Crohn’s disease-associated bacteria lives in the gut and when we do that, we can develop new treatments,” said Coombes.

But Coombes’ pioneering research could not have been done so efficiently without help from his two children, 10-year-old Ben and Lauren, 13.

They gave the research team a leg-up by delivering boxes filled with pipettes used for the experiments. Their efforts earned them acknowledgement in the team’s academic paper.

“They shifted close to 500,” said Coombes. “It was a big help for the people in the lab and I’m very proud of them.”

The team’s findings were led by postdoctoral fellow Wael Elhenawy and published in Nature Communications. Funding for the study was provided by the Canadian Institutes for Health Research and Crohn’s and Colitis Canada.