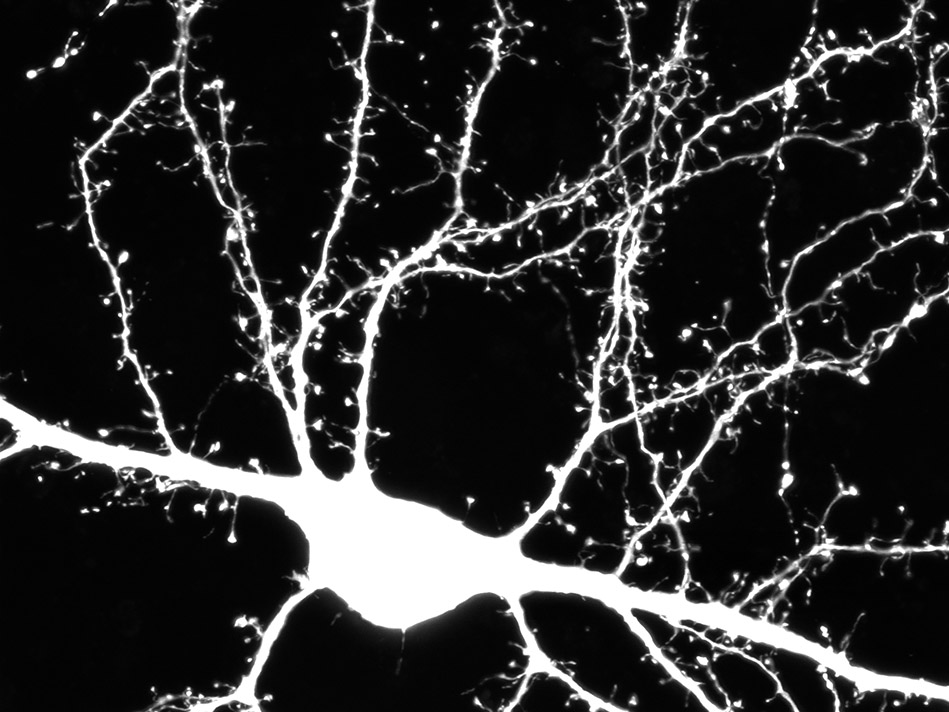 Florescent brain cell showing all places where brain connections form. Brain cells form connections with their neighbours on hairlike growths that sprout from a cell’s branching arms (pictured here). These connections are important for learning. In individuals with Autism, the number of connections is not correct, which causes problems for individuals to form new memories and develop social skills.

Scientists at McMaster University’s Stem Cell and Cancer Research Institute in collaboration with Sick Children’s Hospital have discovered genetic alterations in the gene DIXDC1 in individuals with autism spectrum disorders (ASD). This gene was found to change the way brain cells grow and communicate.

This finding, published today in Cell Reports, provides new insights into ASD that will guide identification of new medications for people with ASD. This is critical because ASD affects one in 68 individuals, and there are no medications that target the core symptoms of this complex disorder.

The study was led by Karun Singh, a scientist with the Stem Cell and Cancer Research Institute (SCCRI) and an assistant professor of biochemistry and biomedical sciences at McMaster’s Michael G. DeGroote School of Medicine.

The researchers discovered an important ‘on’ button in DIXDC1 protein that instructs brain cells to form mature connections called synapses with other brain cells during development. Working with the leading geneticist Stephen Scherer from The Hospital for Sick Children and the University of Toronto, the team identified genetic changes that keep DIXDC1 turned “off” in a group individuals with autism, predicted to cause brain synapses to stay immature, and reduce brain activity.

“Because we pinpointed why DIXDC1 is turned off in some forms of autism, my lab at the SCCRI, which specializes in drug discovery, now has the opportunity to begin the searching for drugs that will turn DIXDC1 back on and correct synaptic connections,” said Singh. “This is exciting because such a drug would have the potential to be a new treatment for autism.”

While this discovery holds promise, mutations in DIXDC1 account for only a small number of individuals with autism and related psychiatric conditions, Singh said.

“However, there is strong evidence that many other autism genes disrupt the development of synapses similar to DIXDC1; therefore, the key to a new treatment for autism will be to find safe medications that restores brain cell synapse growth and activity.”

Mick Bhatia, director of the SCCRI, said the discovery signifies the institute’s strategic entry into the area of neural disease and genetic guided personalized drug development.

“This is the first step of many ahead as the SCCRI continues to strive for near term impact on human health through stem cell research,” he said, adding that the addition of Singh’s team was enabled by the support from the David Braley Chair in Neural Stem Cell Research.