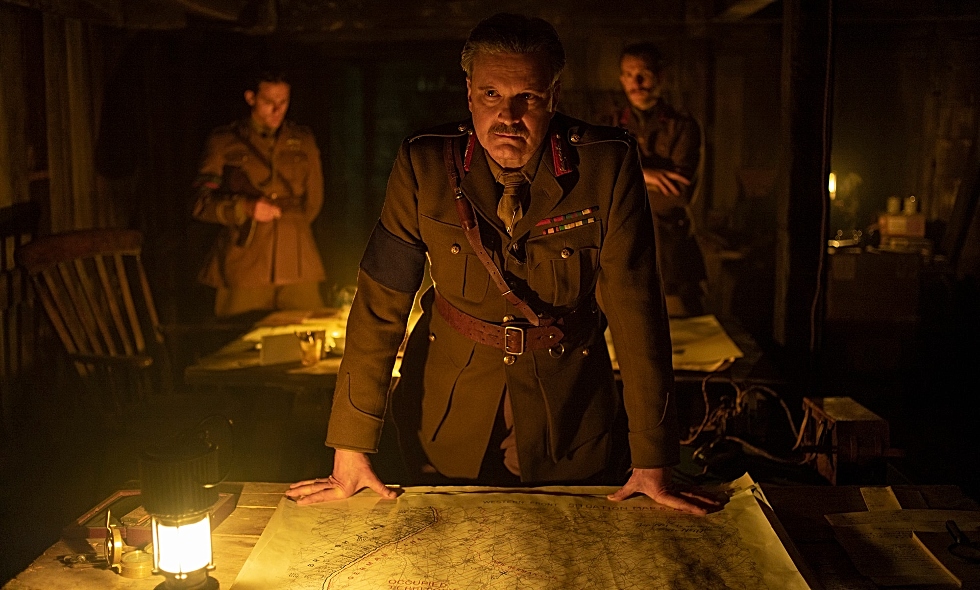 In this image from the Oscar-Nominated film 1917, Colin Firth as General Erinmore stands over a map from McMaster’s extensive World War One trench map collection. The map was modified for use in the film. Image credit: François Duhamel/Universal Pictures

A trench map from McMaster University Library’s extensive World War One map collection is playing a supporting role in one of this year’s most acclaimed films.

The map, which depicts a network of trenches in Northern France between Arras and Cambrai, is part of the set design in the film 1917, directed by Oscar-winner Sam Mendes and featuring Benedict Cumberbatch and Colin Firth.

Recently nominated for ten Oscars, the film tells the story of two British privates, Schofield (played by George MacKay) and Blake (played by Dean-Charles Chapman), who are sent through enemy territory to warn their comrades – Blake’s brother among them – of an impending attack by the German army during the Battle of Arras in the spring of 1917.

A modified version of the map appears in the film as set-dressing, helping to recreate the Erinmore dugout in one scene of the film.

“It’s a thrill to see McMaster’s maps used in this way,” says Beck adding that the maps are among those contained in the Library’s Lloyd Reeds Map Collection, which includes the largest online collection of WWI and WWII maps in the world. “Once you make these maps available online, you’re constantly surprised by the applications they’re put to.”

Explore the original version the map used in the film

This isn’t the first time maps from the Library’s online collection have been featured on the big (or small) screen.

In 2014, a map from the Library’s WWII collection was used in the film Fury starring Brad Pitt. As well, McMaster’s WWI maps and WWI aerial photos played a major role in the Canadian Geographic documentary Drawn to Victory, and the Historica Heritage Minute, Vimy Ridge.

Maps from the collection were also used as part of the Toronto Star series, “Walking the Western Front,” and have been featured in many other publications.

The Library’s online map collection was first established in 2007, then expanded starting in 2012 after the acquisition of a large-format scanner, funded in part by donations from McMaster Geography and Geology alumni.

In total, the Library has made more than 5500 WWI and WWII maps and WWI aerial photos from the Library’s print collection available online and has partnered with the University of Alberta and Wilfred Laurier University’s Laurier Centre of Military and Strategic Disarmament Studies to digitize more than 8000 maps which are now available on the Library’s website.

The Library is now partnering with the Canadian Warplane Heritage Museum to digitize their aeronautical and bomber charts.

In addition to WWI and WWII maps, McMaster’s online map collection includes a wide variety of maps and geographical resources – such as topographic maps,historical and rare maps,  fire insurance plans, and military maps from the Boer, Korean, and Vietnam wars – which have been used for a number of purposes from scholarship and student learning, to environmental assessments, video games, archeological work, city planning and even décor.

Rather than helping and providing new unbiased tools for policing, police surveillance technologies tend to be reactionary and biased, writes Constantine Gidaris.

Researchers analyze artifacts in one of Mesoamerica's earliest villages that suggest the community was in the early stages of establishing a complex social organization.