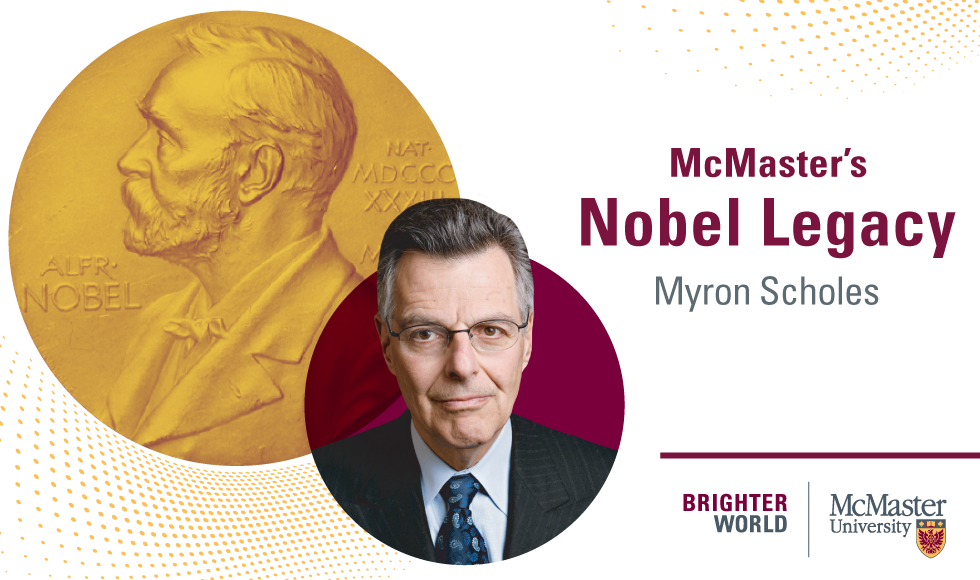 Nobel laureate Myron Scholes has always been fascinated by uncertainty.

Growing up in the frigid winters and bug-infested summers of northern Ontario, Scholes saw uncertainty in the nature that surrounded him. Eventually, this fascination evolved into a desire to get to the bottom of it.

Religion, philosophy, sociology, physics: These subjects all seek to understand and address uncertainty in their own way, but one subject stood above the rest for Scholes: Economics.

“I thought economics, which was important to me because of the dynamics or changes that I saw in society that were occurring all the time, would lead to uncertainty and more uncertainty and changes,” says Scholes.

His desire to understand how uncertainty works brought him to McMaster, where he was introduced to the works of fellow economists and Nobel laureates George Stigler and Milton Friedman.

Scholes graduated with a degree in Economics in 1962, but the learning didn’t stop there.

“A lot of my friends went to Osgoode Hall to be lawyers or they went into the straight and narrow,” explains Scholes, “but something made me say no, I don’t want to go in that direction. I want to continue my education and learn much more about my field that I didn’t think I knew that much about.”

Scholes continued his studies in economics at the University of Chicago.

After completing his Ph.D dissertation, Scholes took on a professorship at MIT. It was here that he would meet Fischer Black and Robert Merton, like-minded economists who shared a collective interest in pricing models.

His academic partnership with Black led to the creation of the Black-Scholes equation, a mathematical model used to determine the value of derivatives. Their game-changing formula revolutionized the field of financial economics and options trading.

In 1997, Scholes shared the Nobel Prize in Economics with Merton, who adapted the Black-Scholes formula for wider uses in other areas of finance. Black died in 1995.

Today, the Black-Scholes equation continues to impact the field of financial economics.

“The arbitrage approach introduced by the Black-Scholes equation in the early 1970s continues to be used with various twists to identify what any derivative asset is worth, inferred from hedging price risk relative to the underlying primary asset,” says Ronald Balvers, Chair of the finance and business economics at McMaster’s DeGroote School of Business.

“Even the original Black-Scholes model continues to be used in practice in option trading to provide quick approximations of what options should be worth.”

Beyond his Nobel Prize-winning work on the Black-Scholes model, Scholes also co-authored a second paper with Black and Michael Jensen that provides the basic empirical approach to relate security betas to their average returns.

“This approach is still widely used in academia as well as in the finance industry,” explains Balvers.

Even now, Scholes’ fascination with uncertainty lives on.

He is working on devising solutions that will enable portfolio managers to navigate the uncertainty of climate change as they deal with the risks associated with increased carbon emissions. He is also working on a technology that will marry portfolio theory and option theory.

In the guest lectures he delivers to students around the world, one piece of advice remains constant: Stay curious.

“’Learn all you can’ is the basis of what you need to move forward,” says Scholes, “but also be curious and find new things to search for that may add value for you, for the others around you and for society in general.”