Measuring the Milky Way: One massive problem, one new solution 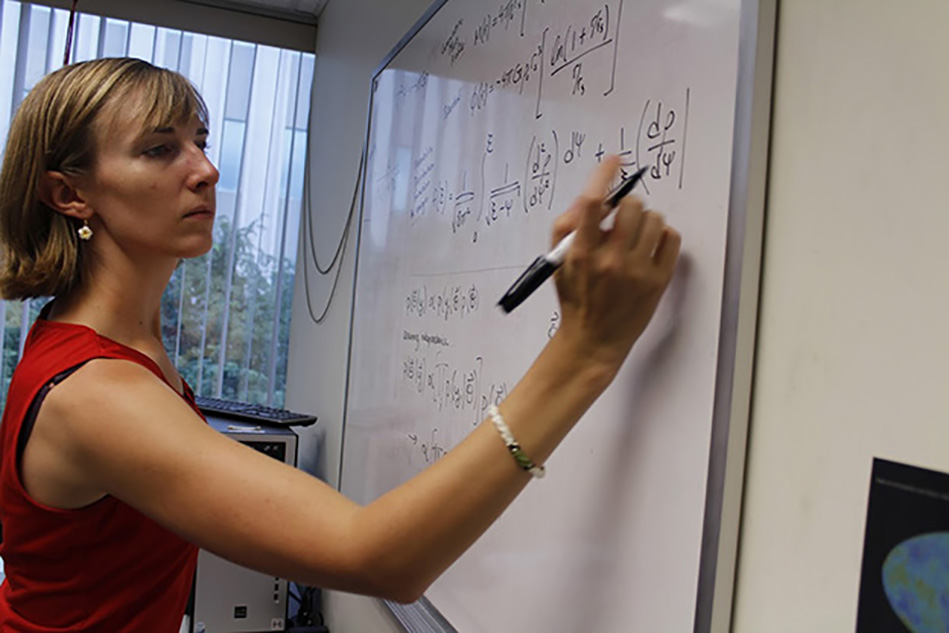 It is a galactic challenge, to be sure, but Gwendolyn Eadie is getting closer to an accurate answer to the question that has defined her early career in astrophysics: what is the mass of the Milky Way?

In terms that are easier to comprehend, that’s about the mass of our Sun, multiplied by 700 billion. The Sun, for the record, has a mass of two nonillion (that’s 2 followed by 30 zeroes) kilograms, or 330,000 times the mass of Earth.

“And our galaxy isn’t even the biggest galaxy,” Eadie says.

Measuring the mass of our home galaxy, or any galaxy, is particularly difficult. A galaxy includes not only stars, planets, moons, gases, dust and other objects and material, but also a big helping of dark matter, a mysterious and invisible form of matter that is not yet fully understood and has not been directly detected in the lab. Astronomers and cosmologists, however, can infer the presence of dark matter through its gravitational influence on visible objects.

Eadie, a PhD candidate in physics and astronomy at McMaster University, has been studying the mass of the Milky Way and its dark matter component since she started graduate school. She uses the velocities and positions of globular star clusters that orbit the Milky Way. The orbits of globular clusters are determined by the galaxy’s gravity, which is dictated by its massive dark matter component. What’s new about Eadie’s research is the technique she devised for using globular cluster (GCs) velocities.

The total velocity of a GC must be measured in two directions: one along our line-of-sight, and one across the plane of the sky (the proper motion). Unfortunately, researchers have not yet measured the proper motions of all the GCs around the Milky Way. Eadie, however, has developed a way to use these velocities that are only partially known, in addition to the velocities that are fully known, to estimate the mass of the galaxy. Her method also predicts the mass contained within any distance from the center of the galaxy, with uncertainties, which makes her results easy to compare with other studies.

Eadie and her academic supervisor William Harris, a professor of Physics and Astronomy at McMaster, have co-authored a paper on their most recent findings, which allow dark matter and visible matter to have different distributions in space. They have submitted this work to the Astrophysical Journal, and Eadie presented their findings this week at the Canadian Astronomical Society’s conference in Winnipeg.

Even after all this work, she says, she still loves looking into the night sky. In fact, she loves it more.

“Every so often I think, ‘I’m measuring the mass of the Milky Way.’ That’s pretty neat.”

For more coverage on this story visit : National Geographic, Science Daily or The Guardian.