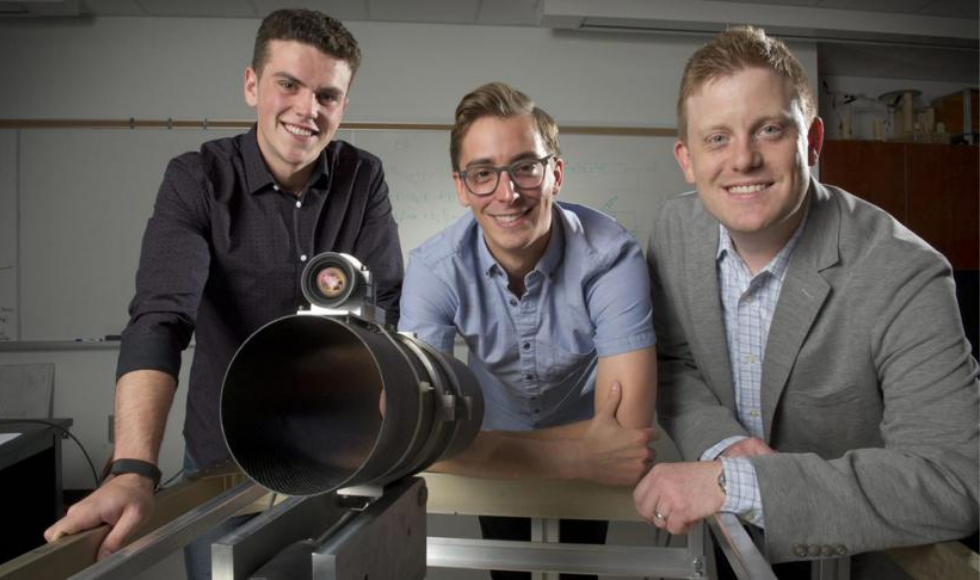 By the light of the moon, we might see our own planet more clearly.

That’s the goal of NASA’s airborne Lunar Spectral Irradiance, or air-LUSI project, which is sending a telescope into high altitude flight to measure reflected moonlight.

That steady source of light serves as a calibration reference, helping researchers improve the accuracy and consistency of measurements among Earth-observing satellites.

Central to the measurement process is ARTEMIS – the autonomous, robotic, telescope mount instrument subsystem designed, built and programmed by Andrew Gadsden, a McMaster associate professor in mechanical engineering, and his team.

“The project itself is essentially to build a system to collect light from the moon at a very high altitude,” explains Gadsden, co-principal investigator on the air-LUSI project.

His team was tasked with mounting a telescope to a stable platform on the wing pod of NASA’s ER-2 aircraft and creating an autonomous system to keep it pointing at the moon as the plane flies.

Armed with little more than the plane dimensions and the size of the telescope, which was built by the U.S. National Institute of Standards and Technology (NIST), Gadsden and his team designed and machined ARTEMIS to fit into the wing pod.

“The data is used by the Earth-observing satellites which NASA uses primarily for their climate change models, so it has a significant impact in improving our knowledge of our planet,” says Gadsden. Since 2019, the system has flown several successful flights as part of NASA’s satellite calibration and validation efforts. Its most recent data collection flight was last month.”

“As researchers get a better understanding of what’s actually happening here, they can develop more accurate models to predict what will happen in the future.”

Funded by NASA, the air-LUSI project was launched at the University of Maryland, where Gadsden previously worked. The collaboration also involves team members from NIST, NASA and the U.S. Geological Survey.

The international team was recently awarded NASA’s 2021 Robert H. Goddard Award in Science for the development and demonstration of the instrument.

“It’s quite a prestigious award, so we were pretty happy to receive it,” says Gadsden.

Recognition of the merits of the project may help land a new round of funding to allow the team to make system improvements and continue with data collection.

He notes that the project offers master’s students a great training opportunity in aerospace instrumentation and a chance to work with prestigious organizations like NASA and NIST.

Apples treated with fungicides could be spreading a drug-resistant pathogen, researchers find

Fungicides widely used to prevent apples from spoiling may be fueling the superbug crisis by acting as reservoir for drug-resistant strains of a deadly pathogen, warn researchers from McMaster University and the University of Delhi.