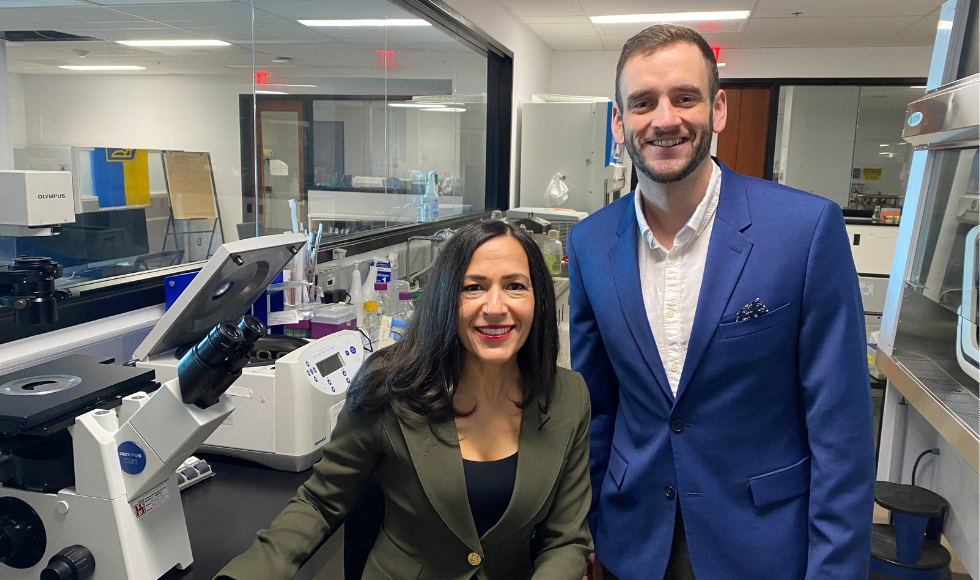 Researchers Sheila Singh and William Gwynne are part of a McMaster University-led study that says an enzyme that drives the growth of an often-lethal childhood brain cancer may hold the key to a future treatment.

An enzyme that drives the growth of an often-lethal childhood brain cancer may hold the key to a future treatment, says a McMaster University-led study.

Researchers discovered that by blocking the production of an enzyme called DHODH, they were able to halt the growth of MYC gene-amplified medulloblastoma, the most aggressive subtype of this cancer, in mouse models.

First author William Gwynne said that while blocking DHODH stops the cancer spreading, healthy brain and nerve cells are spared. This will avoid the after-effects of current treatments, including radiotherapy and chemotherapy, which can impair children’s brain development even if their cancer is successfully treated.

“This potential treatment pathway will allow us to kill the weeds but save the flower of the developing brain,” said Gwynne, a post-doctoral researcher of the Centre for Discovery in Cancer Research.

“This DHODH treatment target is full of promise, but it will take several years before we can reach the clinical trial stage. This potential new treatment, unlike current ones, will not be toxic to the developing brain.”

The study was published in the journal Cancer Cell on Nov. 10.

Gwynne said all types of medulloblastoma originate from neural stem cells in the cerebellum, the part of the brain that controls voluntary actions such as walking, balance, co-ordination and speech. The cerebellum develops fully after a child is born.

He said the cancer starts when cell development in the cerebellum goes awry but studying the causes of this dysfunction can lead to new treatments.

“The notion of identifying new discoveries never before seen that can benefit others is a dream,” said Gwynne. “That’s what gets me up in the morning.”

Common medulloblastoma symptoms include gait and balance difficulties, nausea, headaches and swelling of the head.

By the time children are diagnosed, the cancer has often spread throughout the brain and into their spinal fluid, especially if it is the MYC-amplified subtype.

Gwynne said that medulloblastoma is the most common pediatric brain cancer diagnosed in children and brain tumors have recently overtaken leukemia as the most lethal childhood malignancy.

“Over the last two decades, we have made significant treatment advances in surgery, chemotherapy and radiotherapy, so the five-year survival rate for medulloblastoma is now more than 70 per cent,” said Gwynne.

“However, the roughly 30 per cent of children whose cancer does not respond to currently available treatments have no other options.”

External funding for the study was provided by the Canadian Institutes of Health Research, the Ontario Institute for Cancer Research Cancer Stem Cell Program, the Canadian Cancer Society Research Institute, the Box Run Foundation and the Team Kelsey Foundation.