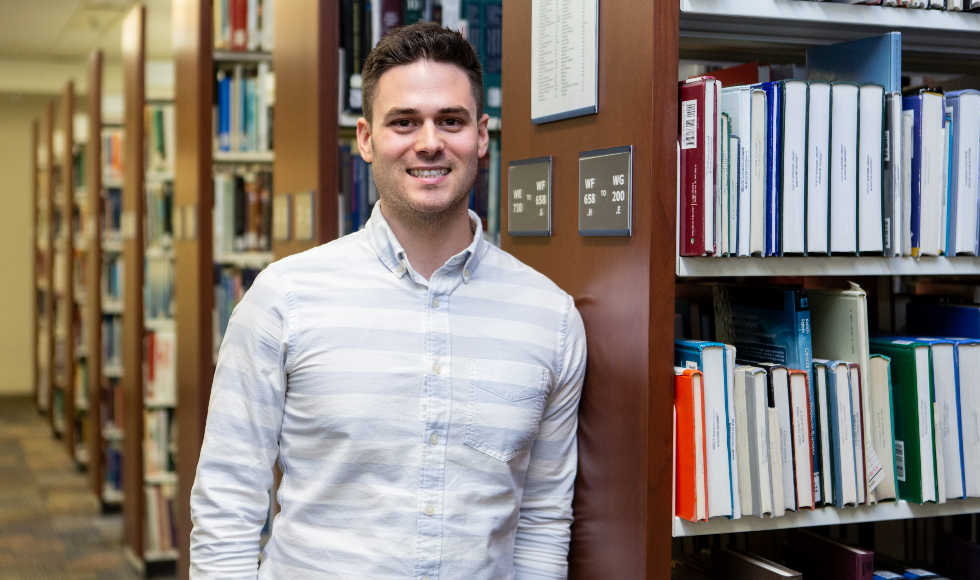 John Krzeczkowski is a PhD student in the McMaster Integrated Neuroscience Discovery and Study (MiNDS) neuroscience graduate program. His work focuses on working with women to see whether diet and exercise interventions during pregnancy have an effect on an offspring’s emotional regulation when they’re toddlers. Here, he talks about his work, his shift from engineering to neuroscience, and his volunteer work with people in crisis.

I’m looking at two factors that are both common and potentially modifiable early in life: a mother’s diet and exercise pre-natally, and depression and anxiety post-natally. Right now, I’m focused on diet and exercise intervention in pregnancy and its effect on the offspring’s emotional regulation when they’re two and three years old.

I’m working with women in the CIHR-funded Be Healthy in Pregnancy randomized control trial to see whether a nutrition and exercise intervention while a woman is pregnant will result in better emotional regulation in their offspring.

Emotional regulation is an important over-arching concept that brings together a lot of different things – it’s an individual’s ability to modify, evaluate and modulate their emotional reaction to things that happen in their environment. Children who have difficulty with that are at risk for more mental health problems, but also could face other issues in life as well – they’re at greater risk to have an income below the poverty line, criminal convictions and other challenges.

On the big shift that changed his life

After high school, I went to Queen’s University for engineering – I was interested in buildings and bridges and dams, so I was planning to become a civil engineer. While I was at Queen’s, I started to realize that, although it’s an awesome program, engineering and the number crunching that went along with that discipline wasn’t really for me.

I was more interested in the human side of everything – so I took a psychology elective and started to wonder how I could possibly do more of that. After my third year of engineering at Queen’s I decided to transfer to the neuroscience program at Brock University, and basically started over. It was a big shift, I was apprehensive, and there was a lot of wondering whether I was doing the right thing – but I loved it almost instantly. I finally found my discipline, something I could really sink my teeth into and actually use to make a difference someday. I loved it so much that I decided to do neuroscience research as long as I can.

On what inspired his research

My research started with the volunteer work that I did while I was at Brock. Since I was interested in mental health, I began volunteering for Distress Centre Niagara, which is a 24-hour phone service where people can call in with any issue they may have. We were trained to help people work through their problems, be a listening ear and be non-judgemental – just be there for people.

The first-ever call that I had as a volunteer was with a woman who had found out she was pregnant – she was going through a lot of problems at the time, and was dealing with a lot of stress at the beginning of the call. I used the training I’d received to help her reflect on her problems, and by the end of the call she was laughing.

That call stuck with me – so I started to learn as much as I could about why early life is such a significant time, for both children and their mothers, and what interventions could make a difference.

From working the distress centre I learned about the individual impact of mental health problems – how they affect people and families. When I started doing population-level public health projects, I was exposed to the scope of the problem and just how many people are suffering with mental health challenges.

On Out of Our MiNDS

Our program started an initiative called Out of Our MiNDS many years ago – it’s an outreach program that goes into high school biology and science classes and delivers a hands-on, interactive tutorial on the basic foundations of neuroscience. I’ve been the director of that program for three years. We’ve delivered it to about 800 kids all over the Golden Horseshoe in the last three years.

We want to get kids interested in the discipline of neuroscience and get them excited about the field. It’s great to look around the room and see all these high school students fully engaged in what we’re doing.

My grandfather’s father’s name was John Krzeczkowski, so I email him papers that I’ve published because he likes to see his father’s name on things. He checked the Vanier website every day to see when the announcement would be made public. In fact, he was the one who told me the profiles were online.

It means a lot to me to make people like him proud – he worked very hard to give my dad a good life, and my dad worked hard to give me a good life. It’s another reason why I’m interested in how early life factors can be optimized to give kids the best chance across their lifespan – I was very fortunate in my upbringing, and not everyone is. How can we help more people early in life to put them on better trajectories?

The Vanier Canada Graduate Scholarships are the Government of Canada’s most prestigious awards for doctoral students. The program provides $50,000 per year for up to three years to students who demonstrate academic excellence, research potential and leadership ability. Up to 166 awards are distributed each year by three federal granting agencies: the Canadian Institutes of Health Research (CIHR), the Natural Sciences and Engineering Research Council (NSERC) and the Social Sciences and Humanities Research Council (SSHRC). This year, 10 McMaster students received Vanier scholarships.