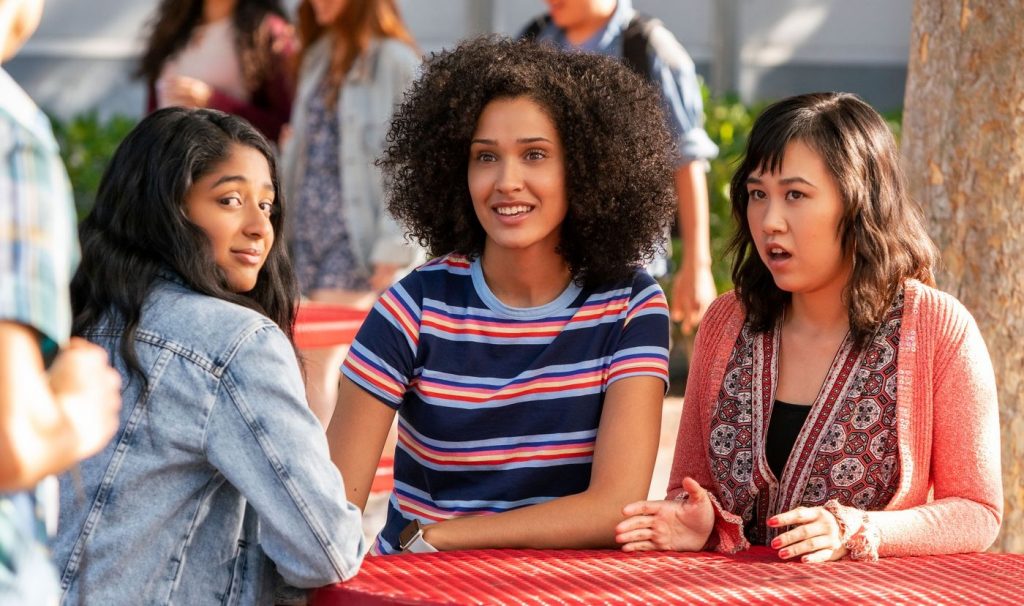 Maitreyi Ramakrishnan, left, stars in Never Have I Ever as Devi, a delightful protagonist who has endearing, thoughtful friends with stories of their own, Fabiola (Lee Rodriguez), center, and Eleanor (Ramona Young), right. (Lara Solanki/Netflix)

Faiza Hirji is an associate professor in the Department of Communication Studies and Multimedia at McMaster University. This article is republished from The Conversation under a Creative Commons license. Read the original article.

Television depictions of South Asians can be uneven at best — Big Bang Theory, Homeland, Saving Hope, 24, to name a few. When I sat down to watch the new Mindy Kaling-produced sitcom, Never Have I Ever, for the first time, I wasn’t quite sure what to expect.

Some reviewers critiqued the show for its unevenness, the stereotypes and having Indian culture explained by former tennis star John McEnroe.

Nonetheless, Never Have I Ever is a fresh, fun and poignant addition to television’s repertoire of coming-of-age stories. With its tender portrayal of imperfect teens navigating a complex world, it is reminiscent of My So-Called Life, which starred Claire Danes.

Although Danes’s character Angela is more introverted than Maitreyi Ramakrishnan’s hotheaded and occasionally self-destructive Devi Vishwakumar, both young women are the core of their stories, frequently awkward and at risk of missing out on real friendships and love as they pursue handsome, popular and vulnerable young men.

For Devi, of course, the travails of high school politics are even more acute because of her refusal to acknowledge the grief she feels over the death of her father. She also struggles with confusion over her identity; as a young American woman of Indian descent, Devi doesn’t know — or want to know — how to feel comfortable in the skin that marks her as different.

It’s a battle that many second-generation and third-generation immigrants know well — we are marked as having a particular identity but either don’t want to enact it or don’t know how. And yet, persistently, we are told that we must.

In some ways, this theme underpins the story of showrunner Kaling, and has formed part of the backdrop for the interest in Never Have I Ever. Regardless of her success, she is often asked to explain why she hasn’t paid more homage to her Indian roots, to account for the whiteness in her writers’ rooms and for the fact that her character on The Mindy Project dated mainly white characters.

Kaling is singled out on the basis that women of colour who succeed are obligated to remember their minority status, and to extend a helping hand to other people of colour. Indeed, artists such as director Ava DuVernay, show creator Shonda Rhimes and screenwriter/producer Lena Waithe are rightly applauded for having opened doors of opportunity to others. At the same time, the notion that we should be particularly critical of a woman of colour — more critical than we are of white showrunners, it seems — for not promoting visible minorities seems like a rather noxious double standard.

The enlightened racism of television

With Never Have I Ever, Kaling is responding to her critics. The cast is gloriously diverse with characters who are Black, Asian, South Asian, Jewish and gay. (Devi’s hunky crush is half Japanese, and his sister is a person with Down Syndrome.) But the appeal of the show is not just that the cast is diverse.

One of the main criticisms of The Cosby Show (before the sexual assault allegations against Bill Cosby, that is) was that the show portrayed a successful family who just happened to be black — a perspective that television scholars such as Herman Gray have criticized.

As media scholars Sut Jhally and Justin Lewis argue, this enables a form of enlightened racism. That is, the presence of people of colour on screen begs the question: does the text engage meaningfully with what it means to be a person of colour in a society shaped by racism?

Devi doesn’t just happen to be brown. It’s a significant part of her identity, and part of her coming-of-age, coming-to-terms-with-herself story. And yet, her brownness is not the entirety of who she is.

She is a rebellious teen who chafes at her mother’s strict rules, misses her father, can be self-centred in the way of teenagers, uses some of her prayers to ask earnestly for a thinning of her arm hair (believe me, the young women of South Asian origin get it), and is trying to reconcile the vision of sexuality she sees in the media with the reality before her.

A future of Devis

idk 'bout y'all but, i cried in this scene in never have i ever pic.twitter.com/rX5UiZ4pi1

And while Devi’s mother and cousin Kamala do invoke stereotypes of Indian culture and gender, they are also smart, strong and good-hearted — even if Devi’s mother has a tough exterior and Kamala presents initially as a Bollywood trope. Clearly, the show isn’t perfect, and as the actress portraying Devi has noted, Devi is only one representation of South Asian culture.

The arrival of Never Have I Ever on the television scene carries with it a sense of promise: of future seasons where we learn more about Devi and where she learns more about herself. Hopefully, future shows will have representations of other girls of different backgrounds. When we have enough of those representations, there won’t be quite so much pressure riding on a show like this one.

Faiza Hirji is an associate professor in the Department of Communication Studies and Multimedia at McMaster University. This article is republished from The Conversation under a Creative Commons license. Read the original article.

Albert Einstein, Martin Luther King Jr, and John F. Kennedy are among the luminaries whose letters are featured in an online exhibit at McMaster focused on philosopher, peace advocate and Nobel laureate Bertrand Russell.

In households with children, the ramifications of shelter-at-home measures — which shuttered schools and child-care centres across the country while also prohibiting families from soliciting support with child care — have fallen disproportionately to women.