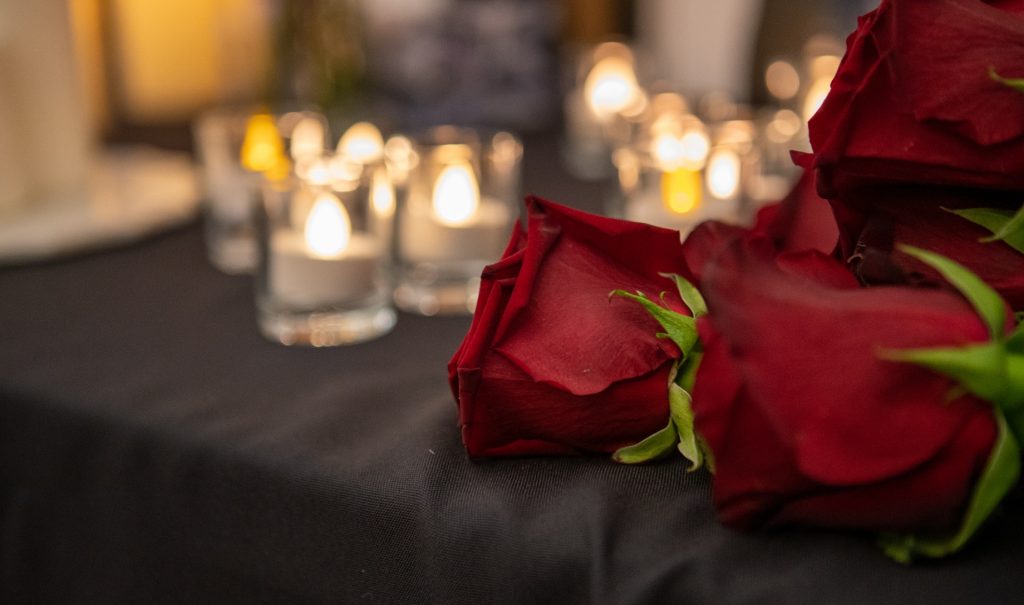 Friends, family and the university community came together at a McMaster vigil Friday to celebrate the lives of Iman Aghabali, Mehdi Eshaghian and Siavash Maghsoudlou, who were killed in the plane crash in Tehran on January 8. (Photo by Georgia Kirkos)

Chandrima Chakraborty is director of the Centre for Peace Studies and professor of English and Cultural Studies at McMaster. This article originally appeared on the Policy Options Politiques website.

We now know that the Ukrainian International Airlines plane PS752 that crashed last week was mistakenly shot down by Iran. It will take time for the investigations to provide us with more answers, but one thing is clear: what happened in Tehran is something that happened to Canada.

Now it is up to all of us to make sure we continue to see it that way.

Our country’s reaction to the loss of 57 Canadians on Flight PS752 is critically important to our evolving national culture and to the healing of those left to mourn their deaths, here at home and elsewhere.

In the immediate aftermath of this tragedy, it might seem certain that this event will be permanently inscribed in Canada’s ongoing history, but an all-too-painful episode proves we must remain mindful.

On June 23, 1985, a bomb detonated on Air India Flight 182, en route from Toronto to New Delhi via Montreal. The mid-air explosion in Irish airspace killed all 329 passengers and crew. The majority were Canadians of Indian heritage, including 82 children under 13.

The Canadian government treated the attack as a foreign tragedy, pushing the bombing to the margins of the national consciousness, and limiting the opportunity for public mourning and collective recognition. Canada’s failure to internalize the loss as a tragedy affecting Canadians complicated the grief of mourning families and deepened their isolation from the nation they called their own.

Will all Canadians take the Tehran tragedy into their hearts and memories and view it as something that belongs to them – something that has hurt us all? Early indications suggest we are heading in the right direction.

In public remarks shortly after the tragedy, Prime Minister Justin Trudeau took care to address the families and friends of the victims. “While no words will erase your pain, I want you to know that an entire country is with you. We share your grief,” he said.

Those were powerful words, especially for those who needed to hear them most.

In another heartening sign that our country has matured since 1985, the Canadian news media have been covering the Tehran crash not just as an international news event, but as one with deep personal consequences. Bringing news of vigils and memorial services being held across Canada and gathering personal stories for readers, viewers and listeners makes a public record of the loss. These stories compel Canadians to see those who perished on Flight PS752 as breathing, living humans whose lives were unfairly cut short.

Many of the stories are reminding Canadians of the Air India crash. Seeing this will bring belated validation to the Air India families, who know this kind of pain all too well. They have been waiting 35 years to have their stories stitched into Canada’s family album.

The difference in government, media and public response to the Tehran crash makes me hopeful that we have learned from the Air India bombing. Innocent lives were cut short by an act of premeditated violence on June 23, 1985, but the victims were not only those who died in the plane crash, but also those who had to live with this loss and, in addition, struggle to claim their place as Canadians. Air India families worked tirelessly for years demanding a public inquiry into the bombing. A public inquiry was finally established in 2006, and in its final report in 2010 (25 years after the airplane crash), the inquiry named the Air India bombing as “a Canadian tragedy.”

The recognition that Canada and Canadians once failed to give Air India victims justice should make the current government more vigilant in seeking answers, accountability and responsibility. A long, drawn-out investigation, as was the case with the Air India crash, can exacerbate the pain experienced by loved ones. Even in 2015, the RCMP claimed that the criminal investigations into Air India were “active and ongoing.” Botched investigations and the failure of the justice system to charge those involved in perpetuating the act of terror has left Air India families still waiting for justice.

Trudeau has promised to make certain the Tehran crash is thoroughly investigated in the hope that a transparent investigation will provide answers and bring some sense of closure for the families. The rising tensions between United States and Iran and the absence of Canadian consular services in Iran might pose some complications as we look for answers.

Canada is a popular destination for international students, for refugees and for immigrants. Many Iranian students came to Canada because of the US travel ban imposed in the wake of Donald Trump’s election as president. Canada is also seeking to greatly increase its foreign-student enrollment by 2022 to bolster its competitiveness in the global economy and add billions to the domestic economy.

Dozens of students and faculty members from Canadian universities – including two PhD students from McMaster, where I am a professor – died in the crash. It was heartening to learn that more than 300 members of my school’s community attended a vigil to support one another.

As a nation of communities, it will be important to create permanent and official ways to commemorate the lives lost in Iran, through monuments, parks, scholarships and other forms of recognition that celebrate the valuable contributions the victims have made to Canadian life. As individuals, this is a time to reach out to grieving friends, neighbours, schoolmates and others in our circles to show we care, and to offer them the opportunity to share their memories and experiences.

With this fresh tragedy so cruelly visited upon another set of families, this is a time for all to embrace the mourners collectively and individually, and from the beginning to demonstrate in all ways that this is a Canadian tragedy – to do better than we did before.

Indian student protests suggest Indian universities have successfully educated youth to participate and lead in public life. For exercising this right, students have been beaten and detained.