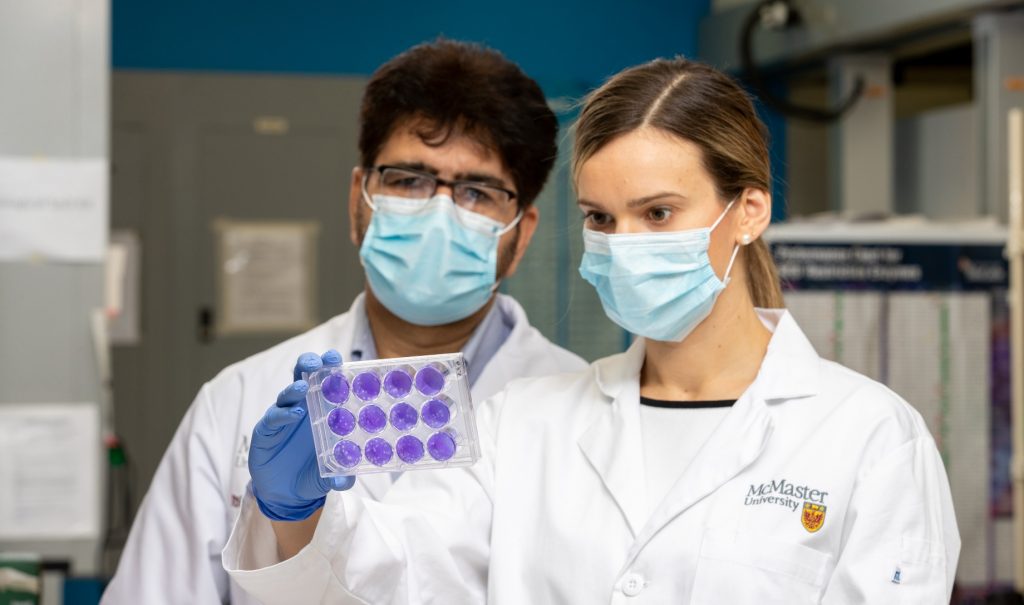 McMaster researchers Sophie Poznanski and Ali Ashkar have established that a novel combination of two forms of immunotherapy can be highly effective for treating lung cancer. (Photo by Georgia Kirkos/McMaster University)

McMaster researchers have established in lab settings that a novel combination of two forms of immunotherapy can be highly effective for treating lung cancer, which causes more deaths than any other form of cancer.

The new treatment, yet to be tested on patients, uses one form of therapy to kill a significant number of lung tumour cells, while triggering changes to the tumour that enable the second therapy to finish the job.

The first therapy employs suppressed “natural killer” immune cells by extracting them from patients’ tumours or blood and supercharging them for three weeks.

The researchers condition the cells by expanding and activating them using tumour-like feeder cells to improve their effectiveness before sending them back into battle against notoriously challenging lung tumours.

The supercharged cells are very effective on their own, but in combination with another form of treatment called checkpoint blockade therapy, create a potentially revolutionary treatment.

“We’ve found that re-arming lung cancer patients’ natural killer immune cells acts as a triple threat against lung cancer,” explains Sophie Poznanski, the McMaster PhD student and CIHR Vanier Scholar who is lead author of a paper to be published Friday, Jan 22 in the Journal for ImmunoTherapy of Cancer.

“First, these highly activated cells are able to kill tumour cells efficiently. Second, in doing so, they also reactivate tumour killing by exhausted immune cells within the patients’ tumours. And third, they release factors that sensitize patients’ tumours to another immunotherapy called immune checkpoint blockade therapy.

“As a result, we’ve found that the combination of these two therapies induces robust tumour destruction against patient tumours that are initially non-responsive to therapy.”

Checkpoint blockade therapy works by unlocking cancer’s defence against the body’s natural immune response. The therapy can be highly effective in resolving even advanced cases of lung cancer – but it only works in about 10 per cent of patients who receive it.

The research team, featuring 10 authors in total, has shown that the supercharged immune cells, when deployed, release an agent that breaks down tumours’ resistance to checkpoint blockade therapy, allowing it to work on the vast majority of lung-cancer patients whose tumours would otherwise resist the treatment.

Once activated, the natural killer cells are able to secrete inflammatory factors that help enhance the target of the blockchain that the other immunotherapy treats.

“We needed to find a one-two punch to dismantle the hostile lung tumor environment,” says Ali Ashkar, a professor of Pathology and Molecular Medicine and a Canada Research Chair who is Poznanski’s research supervisor and the corresponding author on the paper.

“Not only is this providing a new treatment for hard-to-treat lung cancer tumors with the natural killer cells, but that treatment also converts the patients who are not responsive to PD1-blockade therapy into highly responsive candidates for this effective treatment”.

Such progress is possible because of the close collaboration among clinical practitioners and lab-based researchers at McMaster and its partner institutions, Ashkar says.

He said the team’s clinical practitioners, who work with cancer patients every day, provided critical wisdom and collected vital samples from patients at St. Joseph’s Healthcare Hamilton. Ashkar says those clinicians’ insights and the samples were integral to the research.

Co-author Yaron Shargall, chief of the division of thoracic surgery at McMaster’s Michael G. DeGroote School of Medicine and a thoracic surgeon at St. Joseph’s Healthcare Hamilton, says the promising outcome is the result of close links between basic science and clinical medicine.

“It was successful mostly due to the facts that the two groups have spent long hours together, discussing potential ways of combining forces and defining a linkagebetween a highly specific basic science technology and a very practical clinical, day-to-day dilemmas,” he said.

“This led to a flawless collaboration which resulted in a very elegant, potentially practice-changing, study.”

The researchers are now working to organize a human clinical trial of the combined therapies, a process that could be under way within months, since both immunotherapies have already been approved for individual use.