Analysis: Why the ideology of the ‘New Right’ is so dangerous 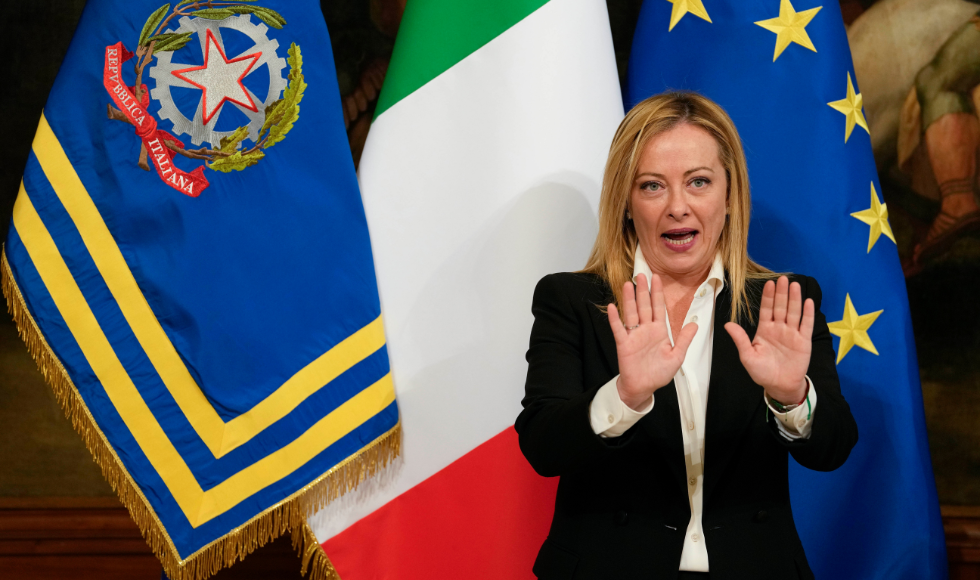 Giorgia Meloni gestures during the handover ceremony with outgoing Prime Minister Mario Draghi at Chigi Palace in Rome in October 2022. Meloni, whose political party with neo-fascist roots secured the most votes in Italy’s national election in September, took office as the country’s first far-right leader since the end of the Second World War. (AP Photo/Andrew Medichini)

The populist radical right has been on the rise for some time, with candidates and parties on the far-right fringe of the political spectrum reaching new heights across the world.

The electoral successes of Donald Trump in the United States, Marine Le Pen in France, the Alternative for Germany and, most recently, Giorgia Meloni’s Brothers of Italy has put the spotlight on an ideological shift: the so-called New Right.

It’s a loose network of radical right-wing activists who organize themselves in regional initiatives such as the Alt-Right in the U.S., the Nouvelle Droite in France, the Neue Rechte in Germany and the CasaPound in Italy.

This broad movement is aiming for an ideological renewal of right-wing politics by focusing on cultural identity and the politics of belonging. Such an approach is called “metapolitical” since it first attempts to shape how we think about and experience our daily world, playing a long game to change the political structures of our societies.

The focus on identity politics has led to a very successful rebranding of far-right extremism. Proponents of the New Right are less committed than their predecessors to discussing natural superiority, and try to avoid the overt racism of traditional neo-Nazi groups, giving their political views a broader appeal.

They instead push the line that white people are oppressed in contemporary western societies. They present themselves as “patriotic activists” who are simply concerned with responding to “uncontrolled immigration,” “anti-white discrimination” and the “loss of traditions.”

One of their main enemies is globalization, against which they insist on a “right to difference” (including Alain de Benoist, one of the founders of France’s New Right movement) for each culture.

They reject the melding of cultures since they believe that cultures are rooted in clearly demarcated and internally uniform social groups. This stems from their key contention that humanity consists of a plurality of distinct “ethnocultures.”

Ethnocultures are organic communities to which their members belong by birth. The family is frequently presented as the biological source of ethnocultural communities.

The members of a community also ostensibly share a way of life. Their communal life is characterized by specific cultural practices and moral values. A person’s individual identity is thus shaped by the ethnocultural community they belong to, according to these New Right proponents.

These proponents often invoke mythical beginnings or supposedly glorious chapters of a community’s past, and emphasize the necessity of historical continuity for its survival.

Cultural traditions therefore must be passed on from generation to generation without significant changes. Fulfilling this task is the common destiny of the members of an ethnocultural community.

New Right advocates focused on identity politics believe that ethnocultures are in competition with each other and their encounters lead to clashes that threaten the collective identity of a community — a ready-made justification for violent conflicts, including war. The results of these struggles show the supposed inequality of the different cultures.

Their concept of culture readily explains why the New Right is obsessed with migration and regard it as a major threat to their political vision. Consequently, they propagate conspiracy theories, including the “great replacement” theory.

In this pernicious view, migration is depicted as a plot organized by liberal global elites to replace the native people of western countries with foreigners. The often proclaimed “right to difference” therefore only applies to the relationships between groups. Individual members of a certain group have to conform to its overall character.

This segregationist agenda not only has harmful consequences for migrants, but also for those who are seen as members of an ethnoculture. Treating cultures as uniform can mask important differences between sub-groups within a culture, especially the diverging interests of the group’s elite and its non-elite members.

We saw this exploited in the rhetoric that British people should “take back control” of the United Kingdom through voting for Brexit. This idea was questionable for a number of reasons, especially the false implication that all members of the group “the British” would be more powerful following Brexit.

The ideology of the New Right is politically dangerous. It also depicts an inaccurate picture of how cultural life works.

Cultures neither have clear boundaries nor are they uniform and consistent over time. They are flexible and dynamic, in constant interaction with each other.

These intercultural encounters can be opportunities to grow and to increase both self-understanding and an understanding of others. Think about the many formative influences that other cultures have had on Europe, including on Christianity (which comes from the Middle East) and the numerical system (which comes from India).

We should embrace the diversity of our cultural lives, and reject the New Right’s attempts to further divide us. While recent election results in Brazil, and in the U.S. two years ago, may be hopeful signs, this is a broader fight about how we interpret the world.

It requires more than election victories to push back against the dangerous ethnocultural framing of social conflicts that’s often embraced by mainstream politicians.

Instead, we need convincing counter-narratives that explain the causes of the economic crises we are facing and promote solidarity as a solution to the staggering social inequality that undermines all societies.