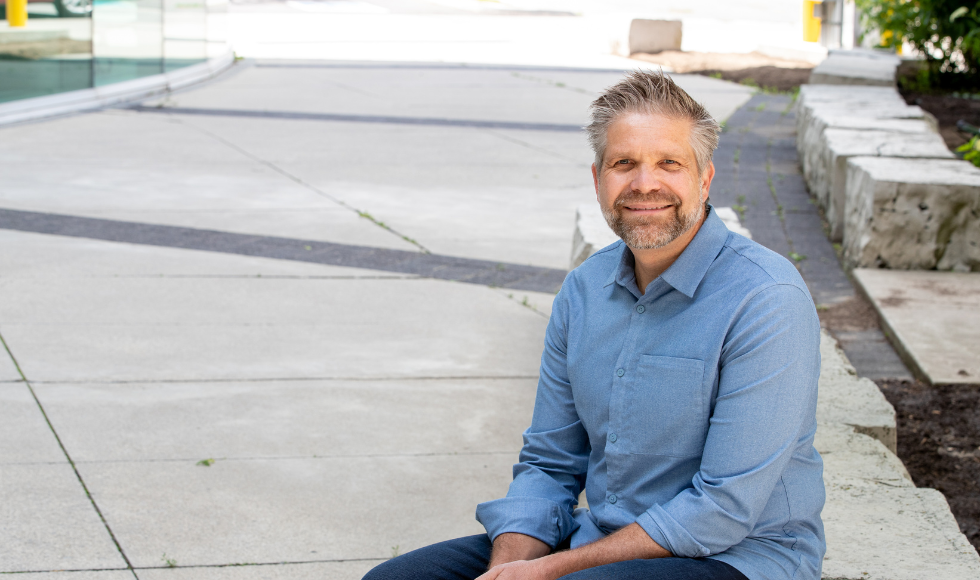 As his former mentor and graduate supervisor Svante Pääbo receives the Nobel Prize for medicine, McMaster evolutionary geneticist Hendrik Poinar, above, reflects on how Pääbo fundamentally shaped his own groundbreaking research.

This weekend, Swedish evolutionary geneticist Svante Pääbo receives the Nobel Prize in Medicine for his extensive research into the genomes of extinct hominins and human evolution. Long before the international acclaim, Pääbo and a small team of researchers worked tirelessly to establish and legitimize an emerging branch of science: paleogenetics. On that team was a young Hendrik Poinar, now a professor of anthropology and biochemistry at McMaster.

As a high school student, Hendrik Poinar spent a lot of time hanging around campus at the University of California, Berkeley. His parents, both faculty members, gave him unique access to Berkeley’s interesting people and places.

Poinar was particularly struck by molecular biologist Allan Wilson and his team of up-and-coming researchers.

“I was just in awe of this science and these people,” recalls Poinar, who is a member of the Michael G. DeGroote Institute for Infectious Disease Research and a principle investigator at Canada’s Global Nexus for Pandemics and Biological Threats.

Among those people were Wilson himself; Kary Mullis, whose role in the invention of polymerase chain reaction (PCR) earned him a Nobel Prize in 1993; and Svante Pääbo, a postdoctoral researcher from Sweden.

Poinar didn’t know it at the time, but his cursory conversations with Pääbo in particular would change the course of his life.

Time travel … and the elevator shaft

Years later, as an aspiring medical school student “sitting in on one orthopaedic surgery after another,” Poinar spent a lot of time pondering his future. He loved the human connection of working with patients but knew that the repetitious components of health care were not for him — he was restless.

When Poinar griped to his father about his uncertainty, he suggested he reconnect with Pääbo, who happened to be visiting from the University of Munich, where he was now pioneering studies in the emerging field of paleogenetics. Poinar jumped at the opportunity.

The conversation completely re-energized him.

“Already, he had developed a reputation as the father of this exciting new field of research,” Poinar says. “Just hearing him talk about evolutionary DNA and using ancient DNA — it was like he could time travel.”

Pääbo invited Poinar to interview for a graduate position that would soon open in his lab in Munich.

The interview went well enough that it turned into an internship-like showcase that kept him working in Pääbo’s lab for a month. During this time, Poinar conducted a variety of experiments under Pääbo’s watchful eye, soaking in as much about this new field of research as he could.

The stay culminated in a seminar Poinar would deliver to Pääbo and his colleagues that would determine his fate at the lab.

Poinar and Pääbo travelled to the seminar hall together. Poinar says he’ll never forget the awkward elevator ride to the room.

It was 1993 and presentations were delivered with a projector that used physical slides.

“I was so nervous — my hands were visibly shaking,” Poinar recalls.

His nerves got the better of him and he dropped his slides — right down the elevator shaft.

“It was so embarrassing,” Poinar says. “The building supervisor had to come disable the elevator and jump down into the shaft to retrieve my slides. I remember standing there and thinking, ‘It’s over — I’m done.’”

But Pääbo congratulated him on a great presentation, saying he’d shown great promise in the lab, he’d asked good questions, and his notetaking was meticulous. Then and there, Pääbo accepted him into his lab.

Over the next five years, Poinar would work hard to earn his PhD under Pääbo’s supervision. It was a challenge at times — Pääbo was known for his tough-love approach — but Poinar unequivocally credits these five years for making him the scientist he is today.

His time with Pääbo showed him the power of scientific controls — experiments or observations that increase the reliability of research results. Pääbo also showed him how to meticulously understand and interrogate his own data, which led to a series of what Poinar describes as “watertight” studies.

Poinar took these life lessons with him when he returned to the Pacific Northwest, where he took on a postdoctoral position at Oregon State University.

He kept in close touch with Pääbo, who pleaded with Poinar to join him at the soon-to-be-established Max Planck Institute for Evolutionary Anthropology that he was set to run. Poinar and his wife Debi, however, had just welcomed a daughter into the world and so he wished to remain close to his family in the U.S.

“He was really persistent,” Poinar says.

The following year, Pääbo’s persistence paid off. Poinar — along with his wife, sons, and baby daughter — was back in Germany, starting a three-year postdoctoral stint at the new Max Planck Institute.

Poinar completed his postdoctoral work there and remained at the institute afterwards as a junior group leader — a position he held right up until he joined McMaster in 2003.

Poinar says it was the research he conducted with Pääbo during this time — learning how to get material out of fossils, creating a framework for legitimizing a new scientific field — that gave him both the credentials and the confidence to establish North America’s first-ever ancient DNA lab here at McMaster.

While Pääbo has leveraged these early studies to explore the Neanderthal genome, Poinar now uses his foundations in ancient DNA to understand past pandemics and the evolutionary dynamics of infectious diseases.

Among Poinar’s growing body of landmark research in the field includes genomic analysis of the Plague of Justinian, which revealed that that the pandemic was caused by a now-extinct strain of Yersinia pestis.

Recently, both Poinar and Pääbo were published in the prestigious journal Nature on the same day — Poinar for his groundbreaking analysis of centuries-old DNA from victims and survivors of the Black Death pandemic, and Pääbo for his genomics-informed analysis of the social organization of Neanderthals.

In a way, Poinar says, both studies come from the same place.

“I’ve certainly carved my own path, but there’s a direct line connecting my career to his,” he explains.

“The methodology that we use here today was informed by his work — everything we’ve built here at McMaster sits on a strong foundation that was laid back in Germany.”

That foundation has served Pääbo well, too. On Dec. 10, he will receive the Nobel Prize for his extensive research into extinct hominins and human evolution.

Poinar is proud of his former mentor, and grateful to have played a small role in his rise.

“It was challenging work, but I’m so thankful for it now,” Poinar says. “The attention to detail, the meticulousness — I owe a lot of my professional success to the lessons he taught me.”

Poinar tries to impart those same lessons onto his own students now, but insists he does so with a “softer touch” than Pääbo — “or at least I’d like to think so.”

‘It all traces back to Pääbo’

Poinar and Pääbo remain in touch; but their relationship has evolved from mentor/pupil to friendly rivalry — “We were just going back and forth about stealing each other’s thunder in Nature,” Poinar says.

Pääbo has visited Poinar’s research group at McMaster, and the two recently joked about when Pääbo might send half of his Nobel prize funding to Canada.

Poinar is excited about the future of evolutionary genetics, thanks in large part to the path charted by Pääbo. There are now four or five generations of Pääbo-trained researchers spread all across the world, each leading their own unique genetics programs, Poinar says.

Meanwhile, investments and advancements in new technologies have created endless possibilities for the field.

“We’re in a really great place, and it all traces back to Pääbo,” Poinar says.

Hendrik Poinar is a professor of anthropology and biochemistry at McMaster University, and a principal investigator at the Michael G. DeGroote Institute for Infectious Disease Research and Canada’s Global Nexus for Pandemics and Biological Threats.