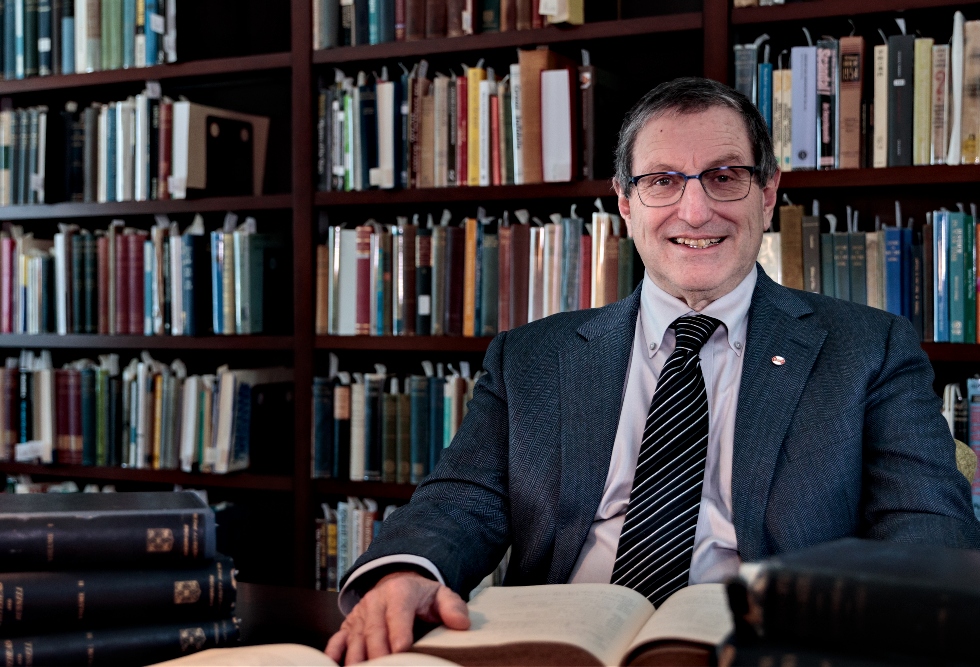 It was a work of epic proportions, one that attempted to address a question that had vexed philosophers and mathematicians since the time of Aristotle: what are the foundations of mathematics and are they rooted in logic?

The result was a large-scale reconstruction of nearly every branch of mathematics, expressed through complex mathematical notation and a new kind of non-syllogistic logic pioneered by Russell which was intended to make the proofs and results fully explicit and precise.

Though, at first, the work seemed impenetrable to many – particularly to philosophers who, at the time, were not trained in mathematical logic – many of Russell and Whitehead’s theories became hugely influential, creating a logical system used by scholars to tackle questions in a number of disciplines from philosophy and mathematics, to biology and linguistics.

Now, McMaster University Library has acquired the corrected proofs of the first two volumes of this seminal work which contain the final set of corrections, hand-written by Bertrand Russell, before the volumes went to print in 1910 and 1912 respectively.

The acquisition of the proofs, which are now part of the Library’s extensive Bertrand Russell Archives – the largest and most complete collection of Russell materials in the world – was funded through a donation to McMaster University by philosopher and Russell scholar Bernard Linsky in honour of his parents, Joan and Leonard Linsky.

“These proofs are the very last version before this limited edition of Principia Mathematica was published,” says Linsky. “It gives us an idea of the changes that were made at the last moment when they had to commit themselves to what was going to be in print. So, these proofs are for people like me who are interested in the origins of this famous work and for book collectors who love to look at original or early versions of things, and that’s what these are – they’re just absolutely unique.”

Linsky says his interest in Russell and in Principia Mathematica was inspired by his father, a philosophy professor at the University of Chicago, who first introduced him to Russell scholarship.

“My father wrote a book in 1967 called Referring which very clearly stated the nature and problems with Russell’s famous theory of descriptions – that was a topic in the philosophy of language at the time,” explains Linsky. “When I got into Russell and would come to the archives at McMaster, my father was someone I could talk to about what I found there. So, Russell certainly brought us together – it was like going into the family business.”

Ken Blackwell, adjunct professor and honourary Russell archivist in McMaster’s Bertrand Russell Research Centre, says the acquisition of the corrected proofs fills what has long been a significant gap in the Russell Archives.

“This is the closest thing we have to an original manuscript,” says Blackwell who explains that only two and a half pages of the original manuscript have ever been found. “Principia Mathematica is perhaps the best known and most influential of Russell’s works as a logician and philosopher, so to now have this nearly complete early version as part of the Russell Archives is just wonderful.”

The existence of the corrected proofs wasn’t known until about two years ago. Blackwell believes Russell sent the proofs to a Polish scholar, Michael Dziewicki, with whom he had been corresponding around the time of the First World War. Dziewicki left the proofs to his son, who emigrated from Poland to Australia in the mid-1920’s.

When Dziewicki’s son died, the proofs came into the possession of a mathematics professor who kept them for some years before they were acquired by an Australian bookseller, and then by a rare books dealer in Denmark, from whom McMaster University Library purchased the volumes.

Blackwell learned of the availability of the proofs through strong friends of the Russell Archives, John G. Slater and Michael Walsh.

“We are thrilled that, after more than a century, these corrected proofs are now publicly available to scholars around the world, says Vivian Lewis, McMaster University Librarian. “The acquisition of the proofs would not have been possible without Bernie’s tremendous generosity. We are truly grateful for this remarkable gift which will no doubt help to new shed light on many aspects of Russell scholarship.”

After the publication of Principia Mathematica, Russell turned his attention to other intellectual pursuits. Though he continued to work on philosophy until the end of his life, Russell became better known as an outspoken and committed advocate for peace, serving as a central figure in the Campaign for Nuclear Disarmament and as a leader in the world-wide opposition to the Vietnam War. In 1950, he was awarded the Nobel Prize in Literature for his prolific writings championing human rights and freedom of thought.

Though Russell once joked that he knew of only six scholars who had read Principia Mathematica in its entirety, the work has nonetheless left an enduring legacy, particularly among philosophers.

“It was Russell and Principia Mathematica that brought mathematical logic to the attention of philosophers and made it what it is today – an essential part of the philosopher’s toolkit,” explains Nicholas Griffin, McMaster University Library’s Scholar in Residence, a philosopher and Russell expert.  “To now be able to access the actual document and read Russell’s hand-written notes is extraordinary and I’m sure will lead to a host of new insights into this tremendously important work, both in philosophy and in many other disciplines.”

Acquisition offers new insights into the legacy of an intellectual giant