Analysis: Online posts may not reflect Chinese opinion when it comes to the Russian invasion of Ukraine 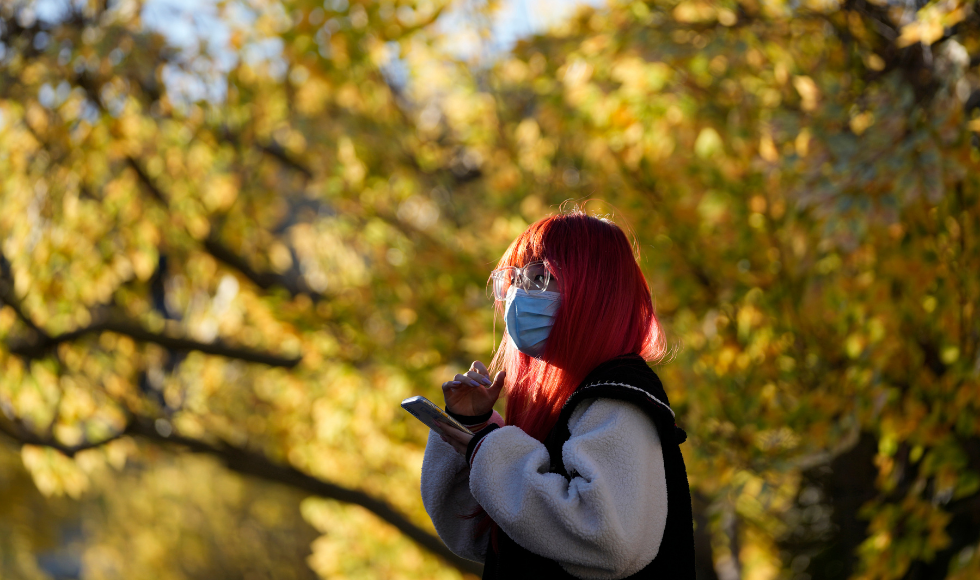 A woman with hair dyed bright red wears a mask as she uses her phone in Beijing. (AP Photo/Ng Han Guan)

While the Russian invasion of Ukraine has rallied public support for Ukraine in Canada and other western countries, China may position itself differently.

In recent years, the deteriorating relationship between China and the West has resulted in the expulsion of foreign journalists from China. In this information vacuum, China’s official announcements and social media have become the two primary sources about China for external analysts.

When it comes to the Russian invasion, Chinese authorities claim neutrality, and the New York Times reports that heavy pro-war views seen in Chinese social media have surprised many Chinese people. However, China’s social media opinions seem more pronounced: many enthusiastically praised Russian President Vladimir Putin as “the greatest strategist of this century,” and more users support Russia than Ukraine in online polls.

Many news articles have argued that the Chinese internet is cheering Russia’s invasion, which serves as the social basis for the Chinese authority’s attitude.

But is the Chinese population in support of war? Do online opinions reflect the public opinion in China?

Social media platforms in China are co-operating with this official stance. They amplify the official voice and prioritize posts sent by state outlets in users’ interface.

Social media accounts run by news media are also asked to align their opinions with the official ones. In practice, they need to avoid sending any anti-war, pro-Ukraine content, and are responsible for removing critical comments. A leaked corporate direction from a news agency states:

“Do not post anything unfavourable to Russia or pro-Western.… Carry out selection and control of comments…. If using hashtags, only use those started by People’s Daily, Xinhua or CCTV (major state-affiliated media).”

The rise of social media in China, as elsewhere, has contributed to the influencer economy, in which social media influencers generate revenues by creating content and monetizing their online popularity.

An investigation by the New Yorker found that a popular influencer account, College Daily, has an internal reward system based on the number of clicks and shares. This account has frequently published articles with headlines that can arouse patriotic and nationalist sentiments, such as “Of course, only Chinese people can save the Earth.”

The growth of a social media influencer economy means that Chinese influencers operate according to the political and economic logic at the same time. In other words, influencers did not stop with adopting the official pro-Russian tone. They took it one step further and embraced — and created — dramatic narratives picturing Putin as a national hero.

A popular influencer with more than four million followers on multiple Chinese social media platforms posted an article that claimed Putin’s strongman leadership was built on “fire and blood.” He praises Putin’s heroic role in conquering Chechnya, Rugghia, Syria and Crimea, and describes Russia’s invasion as a righteous “peacekeeping operation.”

Similarly, another influencer adoringly describes Putin as a real lone hero: “At the age of 70, he still shoulders the mission of governing the country and bringing peace to the world. He challenges half the world by himself.”

This is no surprise considering influencers’ position in China’s social media ecosystem. Expressing anti-official opinions is likely to cause suspension of accounts, if not being permanently blocked by all Chinese platforms. Therefore, influencers are motivated to follow the official tone, submitting themselves to the political logic.

Within the safe zone, the economic logic comes into play. Influencers are racing to generate inflammatory, eye-catching articles so as to attract more followers, clicks, and shares.

In the case of the Russia-Ukraine war, that means more glorification of Putin and more conspiracy theories on the origin of the war.

If opinions on Chinese social media are guided by government officials, selected by media platforms and twisted by influencers, what is the actual public opinion of the Chinese population?

Figuring it out is no easy task. Indeed, even Chinese authorities sometimes miscalculate public response.

During the pandemic, a social media account linked to the Chinese Communist Party posted an offensive picture mocking India’s COVID-19 crisis, assuming that it would highlight China’s success in curbing COVID-19. However, the post received criticism rather than unanimous nationalist praise. It was soon deleted, along with the criticisms received.

During the Russian invasion of Ukraine, many Chinese people have expressed anti-war opinions. On Feb. 26, five Chinese historians published an anti-war open letter.

Two days later, over 130 alumni of China’s top universities issued a statement condemning the invasion. Several social media celebrities, one of whom has more than 13 million followers, posted messages calling for peace. All of these posts have been deleted by the social media platforms within hours, leaving no traces for observers.

We should be cautious in assuming the levels of support for war among the Chinese population, especially when the evidence comes from social media.