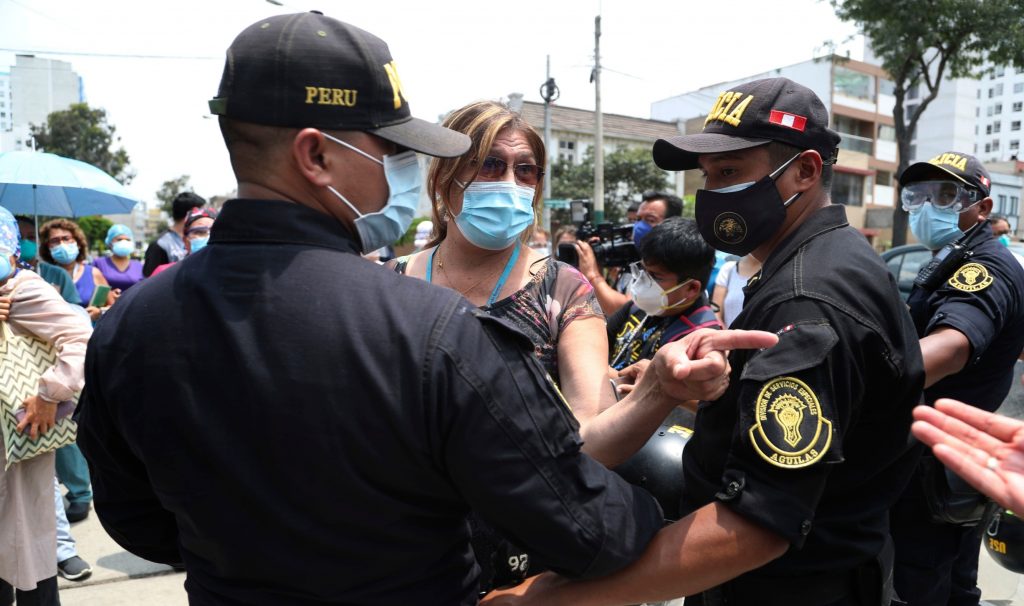 The COVID-19 vaccination gap is evident, with 10 countries accounting for almost three-quarters of the vaccines administered globally.

In Canada, managers of long-term care homes and their relatives allegedly queue-jumped to obtain early access to vaccines over more vulnerable people. In Germany, politicians were found to be skipping the vaccination line, while in Peru, a vaccination scandal dubbed VacunaGate has erupted.

It involves former president Martin Vizcarra and his wife, former ministers of health and foreign affairs, vice-ministers, negotiators, high-profile lobbyists and family members of those in charge of the clinical trial meant to test the efficacy of the Chinese Sinopharm vaccine.

Almost 500 people jumped the queue and obtained an early “courtesy” dose of the Sinopharm vaccine while still negotiating with the company. The Chinese firm provided more doses than those required for the trial and received a conditional sanitary registry under irregular circumstances.

This episode is just the latest in a long history of corruption in Peru that has stirred public outrage. More than a million Peruvians have been infected with COVID-19 and almost 50,000 have died.

Some of the queue-jumpers — those directly implicated in the negotiation process with Sinopharm — may face three to eight years in jail. Public servants who obtained “courtesy” vaccines for themselves or others might be charged with corruption. If any of those officials requested or accepted something in return for those vaccines, their actions might qualify as bribery.

Civil servants who unduly favour one company over others and company officials acting as counterparts in these negotiations may be charged with collusion. Not everyone who obtained courtesy vaccines has the same degree of criminal responsibility and will face the same potential criminal repercussions, raising questions about how we determine what’s immoral conduct, illegal misconduct or both.

The legal questions are still up in the air, and currently a substantial investigation is underway. The scandal also raises concerns about Sinopharm’s practices because it’s the company that provided those extra shots to politicians, their family members, lobbyists and even the Pope’s representative in Peru.

Clinical trials happen in multiple phases. Phase 1 tests safety. Participants in Phase 1 are usually given small doses of the vaccine and researchers will look for side-effects that occur.

Phase 2 looks for utility. Participants in Phase 2 are usually divided into groups who are given different doses of the vaccine, and researchers will determine which dose appears to provide the most protection, if any.

Phase 3 tests the optimal effectiveness of the final product. Participants in Phase 3 are given the most effective dose established in Phase 2 and researchers examine whether this dose is adequately effective on large populations.

The trials that took place in Peru beginning in September were Phase 3 trials. Sinopharm had completed up to Phase 2 before then, but not Phase 3.

For both Canada and Peru, a critical part of research ethics is the principle known as equipoise. Equipoise states that trials are only ethical if there is genuine uncertainty that the intervention in question is more effective than the current standard of care for the target population.

On the other hand, this was a new Phase 3 trial that passed an ethics review. That means the more likely option is that Sinopharm did not know the vaccines were adequately effective when they offered them to politicians.

This suggests Sinopharm might have provided untested vaccines to people outside of the trial. This is also unethical because it is dangerous and can undermine the scientific integrity of the trial. Either way, the two acts of giving “courtesy” vaccinations while simultaneously conducting a clinical trial violate commonly upheld ethical guidelines.

The danger of confidentiality

It is common practice for pharmaceutical companies to demand confidentiality clauses in their contracts with governments. For this reason, countries like Canada and Peru are unable to release all relevant information about these contracts to the public.

Simultaneously, some pharmaceutical companies might also take advantage of the inability of some governments to properly tackle corruption to win over those markets when competing with other pharmaceuticals. Vaccination queue-jumping and “courtesy” samples can lead to quid pro quo arrangements to the detriment of fair and transparent vaccination rollouts.

The Peruvian revelations have caused a massive uproar in the South American country. But they could also be a wake-up call for all nations to allow further investigations regarding Sinopharm’s business practices around the world.

Jorge H. Sanchez-Perez is PhD candidate in philosophy and an instructor in philosophy and the Peace Studies program at McMaster University; Denisse Rodriguez-Olivari is a PhD candidate in political science at Humboldt University of Berlin, and Leanne Woodward is a PhD student in research ethics at University of Waterloo. This article is republished from The Conversation under a Creative Commons license. Read the original article.

Future of Canada Project: McMaster researchers look to the past and today’s challenging times to envision a better future

Climate change and water extremes — things like drought, poor water management, cyclones, flooding — will cause more than a billion people to migrate by 2050.