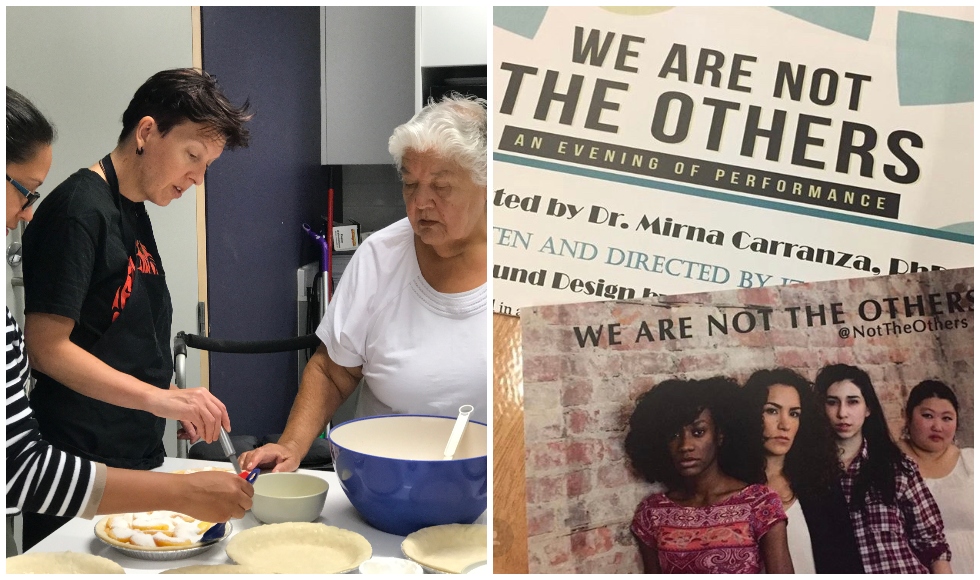 Two teams are being honoured for their community-based research initiatives; the ‘Grand River Mohawk at McMaster’ project, aimed at preserving a unique dialect of the Mohawk language through a number of initiatives, including Mohawk and Cayuga themed baking lessons; and ‘We are Not the Others’, a play – rooted in findings from a research study – that focussed on giving voice to the challenges faced by immigrant women in Hamilton.

Two teams of campus and community partners have been named the inaugural recipients of the President’s Award for Community Engaged Scholarship.

The teams are being honoured for their community-based research initiatives; the Grand River Mohawk at McMaster project, aimed at preserving a unique dialect of the Mohawk language; and We are Not the Others, focussed on giving voice to the challenges faced by immigrant women in Hamilton.

“Both these initiatives exemplify the highest standard of excellence in community engaged scholarship,” says Sheila Sammon, McMaster’s director of Community Engagement. “By establishing strong campus-community partnerships, each of these teams have demonstrated both a deep commitment to McMaster’s principles of community engagement and developed truly meaningful research projects that are having an impact in the Hamilton community and beyond.”

The Grand River Mohawk at McMaster project– developed by a team of community members, as well as faculty, students and staff from McMaster and Six Nations Polytechnic – aims to preserve a dialect of the Mohawk language spoken at Six Nations of the Grand River by only a handful of speakers, most notably, Mohawk Turtle Clan member, Ima Johnson.

Drawing from methodologies and techniques rooted in Indigenous Knowledge and language revitalization scholarship, team members have worked collaboratively to create numerous Mohawk and Cayuga language recordings and resources, such as baking and cooking-themed Mohawk/Cayuga language lessons; the “Mohawk Word of the Day” – a social media and vocabulary sharing project; and a language toolkit to be shared with Ontario universities on how to respectfully approach Indigenous language and teaching when partnering with Indigenous communities.

We are Not the Others, developed by Mirna Carranza, associate professor in McMaster’s School of Social Work in partnership with Nora López, coordinator, Emergency Support Committee for Refugees; Ines Ríos, executive director of the Immigrants Working Centre; and María Antelo, coordinator of community development at the Hamilton Community Legal Clinic, is a play based on the findings from a research study that aimed to learn how the intersection between acculturation, gender relations and intimate partner violence, intergenerational tensions, trauma, loss and ongoing political fear, and economic exclusion impacts Women Immigrants’ mental health and in particular their socio-economic integration to the Hamilton community.

As part of the study, service providers, families and women immigrants were interviewed, many of whom shared their experiences of reception in formal and informal settings, such as schools and grocery stores, and spoke about their experiences of racism and marginalization. The play used their spoken words, including their laughter and sorrow, to depict both their challenges and hopes. It was co-created with women immigrant themselves, as a way to bring their knowledge and stories to a wider audience.

The play was performed in Hamilton at the Hamilton Fringe Festival, the Art Gallery of Hamilton, and in London, Toronto and Scarborough, with the goal of fostering understanding of the experiences of women immigrants and helping to improve the reception of newcomers.

The President’s Award for Community Engaged Scholarship was established to recognize both community and campus representatives who have demonstrated a commitment to initiating and supporting excellence in community-campus research initiatives.

The recipients of the inaugural President’s Award for Community Engaged Scholarship will be honoured at a reception on Thursday, October 25, from 3:15 p.m. to 5:00 p.m. at the David Braley Health Sciences Centre (100 Main St. W., Hamilton). All are welcome. RSVP here