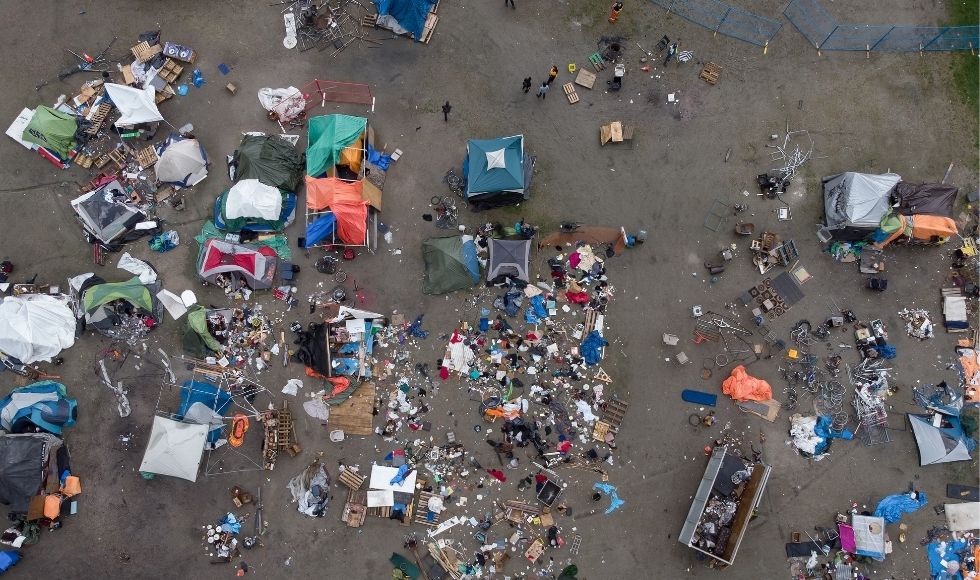 Tents and other structures are seen in an aerial view at a homeless encampment at Strathcona Park in April, 2021. (THE CANADIAN PRESS/Darryl Dyck)

With a rise in tent cities and makeshift accommodations, homelessness has gained visibility.

Local municipal authorities across Canada have worked to enforce bylaws. Many have dismantled encampments to the dismay of activists and homeless people.

These events, media coverage, ensuing protests and policy discussions raise important questions about public space: How should it be used? Who is the public? And the question I am concerned with here, what are the implications of pushing people who are homeless out of these “inclusive spaces”?

Public spaces, such as parks and sidewalks, are typically thought to belong to everyone. However, many scholars have emphasized that there are rules and unsaid expectations that include and exclude.

Very few spaces exist where people who are homeless can feel like they belong.

Bylaws that criminalize behaviours associated with homelessness — like panhandling — and hostile architecture — like a street bench with a central armrest that prevents people from lying down — are ways of pushing people out of a particular space.

Excluding homeless people from public spaces can perpetuate stigmas. These social stigmas typically take the form of labelling, stereotyping, a separation of “us and them” and a loss of social status. Sociologist Ervin Goffman famously described stigma as “a spoiled identity” based on stereotypes rather than inherent qualities.

Homelessness stigmas discredit individuals from participating in social life and limit access to social resources. These stigmas work against efforts to address homelessness because they can lead people to avoid essential services.

A natural approach to addressing stigma is to bring people together by forming relationships — in personal relationships, people know each others’ personal stories and aspirations, making them less inclined to rely on prejudice and harmful stereotypes. Brené Brown, who researches courage, vulnerability, shame and empathy captures the essence of this idea with her catchphrase: “People are hard to hate close up. Move in.” And social infrastructure is the systems and environments that facilitate encounters and relationships, so social scientists have positioned social infrastructure as an antidote to social inequality and fragmentation.

Examples of social infrastructure include community centres, schools and public ice rinks; any space where people can meet and establish social relationships. Social infrastructure is essential to community wellness, it offers grounds for people to pool resources, receive and offer support and navigate social differences.

Strong social infrastructure is accessible, safe and malleable to the public’s shifting interests, needs and challenges. Excluding those who are homeless from public spaces not only deepens stigmas that lead to the avoidance of essential services. It can also further marginalize them from the benefits of participating in communal life.

Spaces for people who are homeless

Thankfully, some institutions seek to offer public spaces for people who are homeless. Public libraries and faith-based organizations, such as mosques, churches and non-profits grounded in religious belief, are two examples. While public libraries and faith-based organizations are both quintessential examples of social infrastructure, they differ in significant ways.

Both have strengths and limitations when it comes to creating social connections. Faith-based organizations can be spaces where deep friendships form. These organizations bring people together regularly into a social and spiritual environment. However, they also have several barriers, such as history or reputation of excluding based on identity.

In contrast, a core value of public librarianship is to remove barriers to services.

Public libraries offer free services, regardless of socio-economic, housing and citizenship status, age, gender, ability, religion, sexual orientation, race or culture. Often described as a “community hub,” public libraries bring people together from all walks of life. Nevertheless, they must balance their enormous mandate to address the informational, learning and leisure needs of diverse populations with bounded resources.

While these two institutions alone may not be able to solve the issue of social stigma, looking at how they provide spaces for homeless people is a good place to start.

Hamilton Public Library’s Parkdale branch in Ontario is an example of a partnership between a faith-based organization and a public library. This library branch is in an affordable housing residence, operated by Indwell.

Indwell describes itself as “a Christian charity that creates affordable housing communities that support people seeking health, wellness and belonging.” As the Parkdale branch only recently opened in July 2021, it presents a budding opportunity to examine how these two types of social infrastructure coalesce to provide inclusive social spaces for people who are homeless.

Partnerships between organizations with shared interests and complementary strengths hold promise when it comes to developing novel solutions to complex problems.

There are several examples of both faith-based organizations and public libraries sharing their spaces with social workers, health-care professionals and local enterprises.

For example, a pilot project in Philadelphia showed that having a social worker and a nurse working in a public library from 9 a.m. to 5 p.m. helped connect homeless people with appropriate health care. The authors attributed some of this intervention’s success to the public library’s financially accessible community space. Partnerships allow organizations to do more than they could alone for those who are homeless.

Looking for creative ways to strengthen social infrastructure for marginalized groups may be an important step towards building a more equitable society post-COVID-19.

Kaitlin Wynia Baluk, Postdoctoral fellow in Health and Society, McMaster University. This article is republished from The Conversation under a Creative Commons license. Read the original article.

Analysis: ‘Schitt’s Creek’ holiday special: For Jews like Johnny Rose, the menorah is still polished and lit, even in diaspora

The fan favourite episode showed how the omipresence of Christmas has offered Jews a variety of non-exclusive options for handling the holiday season.

In the News: Vass Bednar on the pandemic changing the way people see work

Vass Bednar says the pandemic has prompted many in the labour market to reevaluate what their work is and what they want their relationship with it to look like.