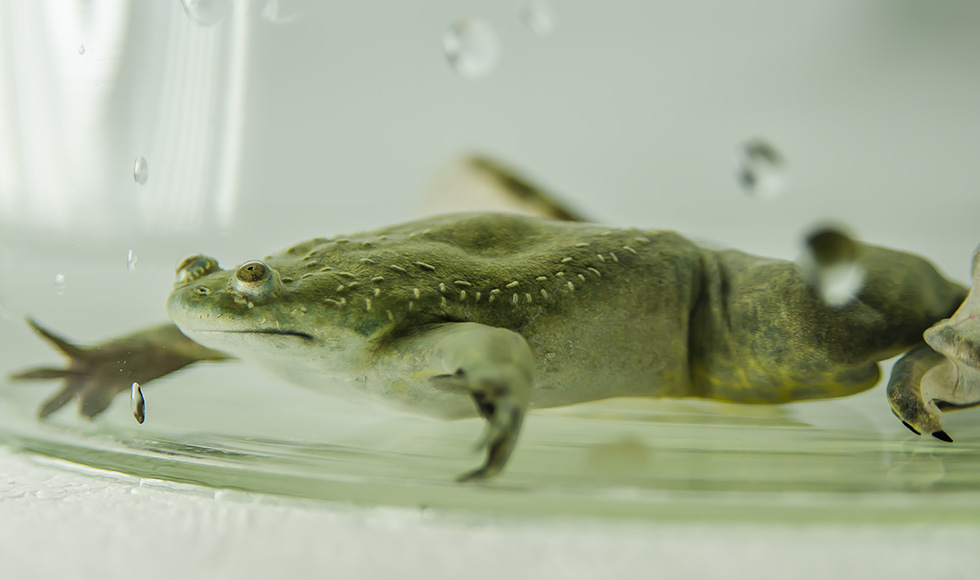 A specimen of the Xenopus species of frog. Photo by: Adam Bewick.

Researchers have discovered striking variation in the underlying genetic machinery that orchestrates sexual differentiation in frogs, demonstrating that evolution of this crucial biological system has moved at a dramatic pace.

A team of biologists examined more than two dozen species of Pipidae, a family of frog found in tropical South America and sub-Saharan Africa, which includes African clawed frogs, a smooth-skinned frog with webbed feet and claws on the hind legs.

They used modern techniques to study a gene known to trigger female development, dm-w, in over 20 species, each of which have both males and females, and requires sexual reproduction to breed.

“Sexual differentiation is fundamentally important in an evolutionary context,” says Ben Evans, lead author of the study and a professor of biology at McMaster University.

“Once you have a system that works so well, one might expect that natural selection would guard against changes to that system. This is why it’s so surprising that the genetic basis for sexual differentiation in fact evolved extremely rapidly in pipid frogs,” he says.

The team found at least seven different systems in place for regulating sex determination across closely related species. Evans explains that three underlying mechanisms within the developmental systems are at work.

In some species, female frogs lost dm-w and use another, unknown gene to determine sex, suggesting dm-w stopped functioning over time. In other frog families, scientists were surprised to find the gene was present in both sexes, suggesting the function of gene became sidelined. In yet other species, dm-w became empowered into a potent female-specific sex determining gene.

“The results of this study,” says Evans, “reminds us that evolution happens no matter how important a certain mechanism or trait might be.”

The study was published in the journal Molecular Biology and Evolution.

In addition to an extension of funding for two current projects, three new projects will be hosted at or in partnership with McMaster University.