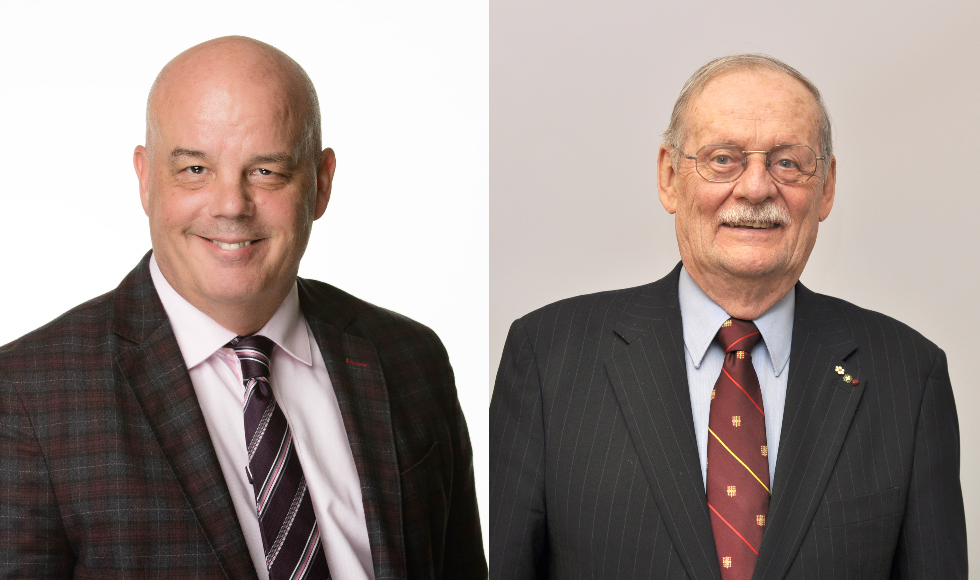 Left: Vascular biologist Richard Austin, medical professor and one of the senior authors of the study. Right: Montreal Clinical Research Institute endocrinologist Michel Chrétien, an emeritus professor at the University of Montreal

Researchers at McMaster University and the Montreal Clinical Research Institute think they’ve found a “fountain of youth” in a rare genetic marker — but it’s unique to a few French-Canadian families.

Called PCSK9Q152H, the mutation of the PCSK9 gene was initially thought to protect against cardiovascular diseases. Recent studies reveal that it may protect against other human illnesses, mainly liver diseases. It may allow the lucky PCSK9Q152H mutant subjects to stay in good health and live longer, the researchers say in a study published today in the prestigious Journal of Clinical Investigation.

The work was led by vascular biologists Richard Austin and Paul Lebeau of McMaster University and by Montreal Clinical Research Institute endocrinologist Michel Chrétien, an emeritus professor at the University of Montreal.

“These are exciting findings — what we’ve found may represent a kind of fountain of youth,” said Austin, a medical professor and one of the senior authors of the study.

“Now we want to see whether we can come up with a gene therapy approach to overexpress this specific mutant gene variant in the liver, and thereby offer an innovative treatment for a number of diseases that normally lead to early death.”

News of the PCSK9Q152H mutation was first published in 2011, after Chrétien, the current study’s lead clinical investigator, discovered it in a French-Canadian family.

Mainly expressed in the liver, the mutated gene lowers a person’s plasma LDL-cholesterol (‘bad’) and prevents cardiovascular diseases. Chrétien and his IRCM colleague Hanny Wassef found it in two other large French-Canadian families, as well.

People carrying this gene mutation are surprisingly healthy well into their late 80s and mid-90s. In addition to their low plasma LDL-cholesterol and their low risk of cardiovascular diseases, their liver function is completely normal when measured through imaging and a complete medical evaluation, the Montreal scientists found.

Until now, however, the underlying mechanism by which the mutation represented a health benefit other than cardiovascular was a mystery.

In the new study, the McMaster researchers show that overexpression of this gene variant in the livers of mice who don’t carry PCSK9Q152H had a surprising protective effect against injury and dysfunction of their liver. As well, overexpression led to a large reduction in their circulating PCSK9 levels — just as it does in people, decreasing individuals’ bad cholesterol and keeping them in good cardiovascular health.

“When we initiated these studies, we had speculated that introducing the mutant PCSK9Q152H protein into the liver of mice would cause liver injury or dysfunction,” Austin said.

But “to our amazement,” added Lebeau, “overexpression of the mutant gene variant in the livers of mice failed to cause stress in the cellular manufacturing and packaging system called the endoplasmic reticulum, or ER, and actually protected against ER stress-induced liver injury.”

In their laboratory, the McMaster scientists went on to show that the mutant gene variant acts as a unique co-chaperone protein to stabilize several well-known ER chaperones, namely GRP78 and GRP94, and to increase their protective activity against liver damage.

“These results from Dr. Austin’s group are particularly gratifying since they experimentally explain that this gene mutation, known to lower cardiovascular accidents, also protects against liver injury and dysfunction, even in individuals who are in their late 80s and mid-90s,” said Chrétien, also an emeritus scientist at the Ottawa Hospital Research Institute.

“Furthermore, these findings should allow us to determine whether this unique mutation provides additional protection against liver diseases such as cancer, over and above its protective effect against cardiovascular accidents.”

The article The loss-of-function PCSK9Q152H variant increases ER chaperones GRP78 and GRP94 and protects against liver injury, by Paul Lebeau and his collaborators will be published in the Journal of Clinical Investigation, on Jan. 4, 2021.

The study was funded in part by the Canadian Institutes of Health Research and the Heart and Stroke Foundation of Canada, the Fondation J-Louis Lévesque, the Richard and Edith Strauss Foundation, the Fondation Notre-Dame de Zeitoun, and the Aclon Foundation.