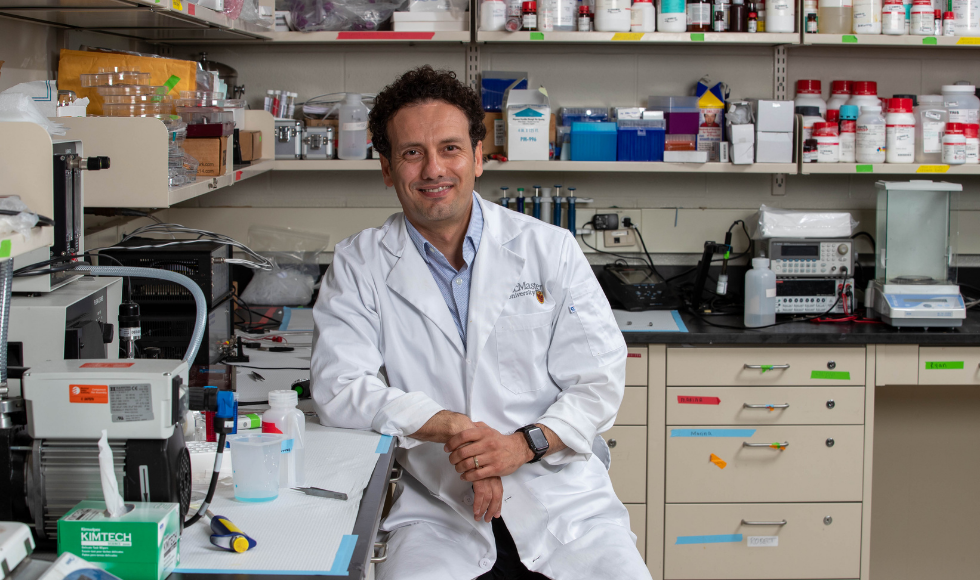 Tohid Didar is the Canada Research Chair in the McMaster School of Biomedical Engineering (Photo by Georgia Kirkos/McMaster University).

Researchers have developed a test to reveal bacterial contamination in dairy products well before they have a chance to reach anyone’s lips.

Researchers at McMaster University, with support provided by Toyota Tsusho Canada, Inc., have proven a method that will allow producers, packagers and retailers to detect bacterial contamination in milk products simply by reading a signal from a test printed inside every container.

The technology can be adapted to detect the most common food pathogens and is also expected to be effective for use with other foods and beverages.

Once it becomes widely available, McMaster and Toyota Tsusho hope it will make the food supply safer and significantly reduce food waste.

The research has been published in the nanotechnology journal ACS Nano.

The test in its current form works by isolating even trace amounts of infectious bacteria in milk products – a technical challenge that until now has been difficult to manage.

“Milk is a very rich environment whose complex biology can mask the presence of pathogens, making it hard to find them,” explains Tohid Didar, a Canada Research Chair in the McMaster School of Biomedical Engineering and an author on the paper.

“In terms of the technical challenge, it’s similar to blood.”

The test works by printing the inner surface of a container with a tasteless, food-safe patch that repels everything but the target organisms, using a biosensor that triggers a change in the patch when such organisms are detected.

The researchers are working with Toyota Tsusho Canada, Inc., an indirect subsidiary of Toyota Tsusho Corporation in Japan, to develop and market a working prototype.

“We chose milk as a demonstration of the technology because it is so challenging. Knowing the technology works in such a complex solution means it can work with other forms of packaged food products, such as canned soup or tuna,” says co-author Carlos Filipe, McMaster’s Chair of Chemical Engineering.

“Whenever we work to generate new business, it must provide a benefit to society,” Town said. “Reducing food waste will benefit everyone, and Toyota Tsusho Canada sees this as a great opportunity.”

The authors of the new research seeded whole milk with E. coli to prove the technology can detect even trace amounts of the bacterium.

Having been proven effective, the researchers say, the detection technology can readily be applied to other food-borne pathogens, such as listeria and clostridium. Yingfu Li, a professor of biochemistry and biomedical sciences and a co-author of the paper, had previously identified various biosensors that can detect specific pathogens.

A test patch covering multiple pathogens could be printed on or otherwise incorporated into many forms of packages, including cartons, plastic tubs, milk bags and bottles so that it can be read, either visually or with a scanner, without opening the package.

The near-term goal is to make the technology available to manufacturers, distributors and retailers, but if it is widely adopted, consumers could one day use handheld scanners to check foods immediately before consumption.