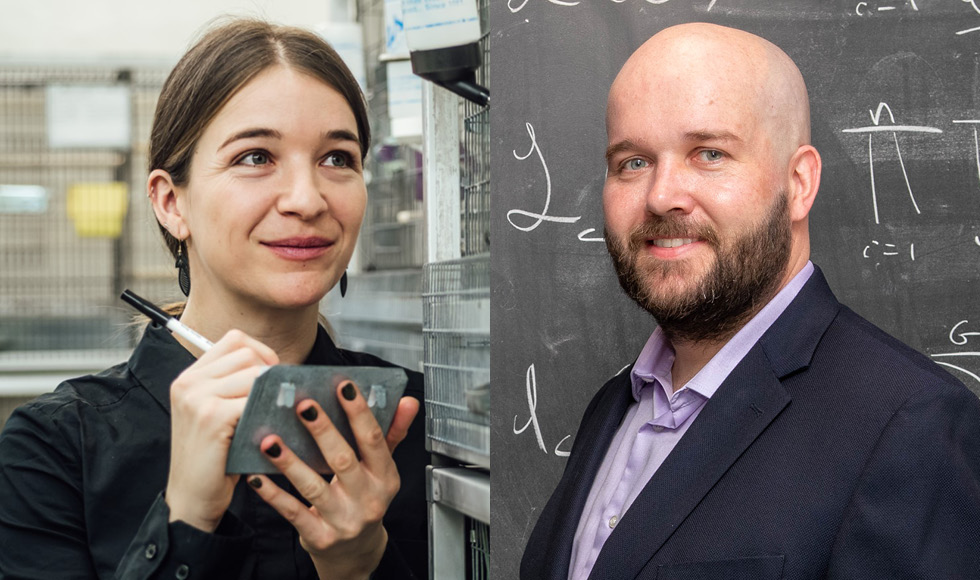 Faculty of Science postdoctoral fellow Leanne Grieves, left, and mathematics professor Paul McNicholas have received prestigious awards from the Royal Society of Canada in recognition of their significant achievements and the promise of more to come.

Two researchers from the Faculty of Science have received prestigious awards from the Royal Society of Canada in recognition of their significant achievements and the promise of more to come.

McNicholas’ award recognizes his outstanding research in the mathematical sciences. It was established in honour of one of the first mathematicians in Canada to obtain international recognition through research, and is endowed by friends of J.L. Synge, society Fellows, the McLean Foundation and Synge’s daughter, Cathleen Synge Morawetz, FRSC.

“I am most grateful to the Royal Society of Canada for this honour and to my friends and colleagues for nominating me,” McNicholas says.

“It is especially humbling to receive the Synge Award having sat, as an undergraduate student, in the Synge lecture theatre in Dublin. I would like to dedicate this award to my dear friend Petros Florides, who himself worked with Synge and often speaks fondly of him.”

McNicholas, whose research is focused on the development, implementation and application of statistical methods, is the Canada Research Chair in Computational Statistics, director of the MacDATA Institute and Editor-in-Chief of the Journal of Classification.

“Paul McNicholas’ career here at McMaster has been nothing less than stellar,” says Karen Mossman, Vice-President, Research. “Much like the award’s namesake, J.L. Synge, Paul has established himself as an influential researcher and mentor, leading the largest statistics research group in Canada and ensuring that, in this data science era, our country remains at the forefront of research in statistics.”

McNicholas made history when he was awarded the Steacie Prize for the Natural Sciences in 2020.

It was the first time one of Canada’s most prestigious awards for early-career scientists and engineers was awarded for research in statistics. McNicholas was also awarded a E.W.R. Steacie Memorial Fellowship in 2019 and was inducted into the College of the Royal Society of Canada in 2017.

“Paul has had a tremendous impact in our department and the university as whole”, says Prof. Matheus Grasselli, chair of Mathematics and Statistics. “The numerous prizes and distinctions he has received over the years, now crowned by the Synge award, have increased the profile and importance of research in statistics done at McMaster nationally and internationally.

“And by the looks of it, he is just getting started.”

Behavioural ecologist Leanne Grieves has received the society’s Alice Wilson Award. Grieves, an NSERC Postdoctoral Fellow in Biology and the School of Earth, Environment and Society, combines field and laboratory methods to study the behavior, chemical and microbial ecology of birds. Her supervisors are Jim Quinn and Greg Slater.

The Alice Wilson Award is presented each year to three women of exceptional academic accomplishments in the Arts and Humanities, Social Sciences or Sciences who are entering a career in scholarship or research at the postdoctoral level.

The award was established by the Royal Society of Canada in 1991 at the behest of the Committee for Advancement of Women in Scholarship, to honour the memory of Alice Evelyn Wilson, the first woman elected to the RSC in 1938. Dr. Wilson was a world-renowned palaeontologist and one of Canada’s foremost geologists.

“The Royal Society of Canada Alice Wilson Award provides important recognition for women in academia, who still face barriers to equity,” says Grieves. “I am grateful to be a 2021 award recipient and I intend to honour Alice Evelyn Wilson’s memory by continuing to make my research accessible to the public.

I am privileged to have many wonderful academic mentors, but I would particularly like to acknowledge my undergraduate and graduate mentors: Drs. Scott Forbes, Susan Lingle, Jim Quinn, David Logue, Beth MacDougall-Shackleton, Mark Bernards, and Greg Gloor.”

Grieves was a Vanier Scholar and received the NSERC Gilles Brassard Doctoral Prize for Interdisciplinary Research Award while completing her PhD at Western University. She was also a McCall McBain Postdoctoral Fellow at McMaster in 2020-2021.

“McMaster University is incredibly proud of Dr. Leanne Grieves, an exceptional researcher and a rising star,” says Maureen MacDonald, Dean of Science. “We are also grateful to the Royal Society of Canada for recognizing outstanding women in academia with this prestigious national honour.”