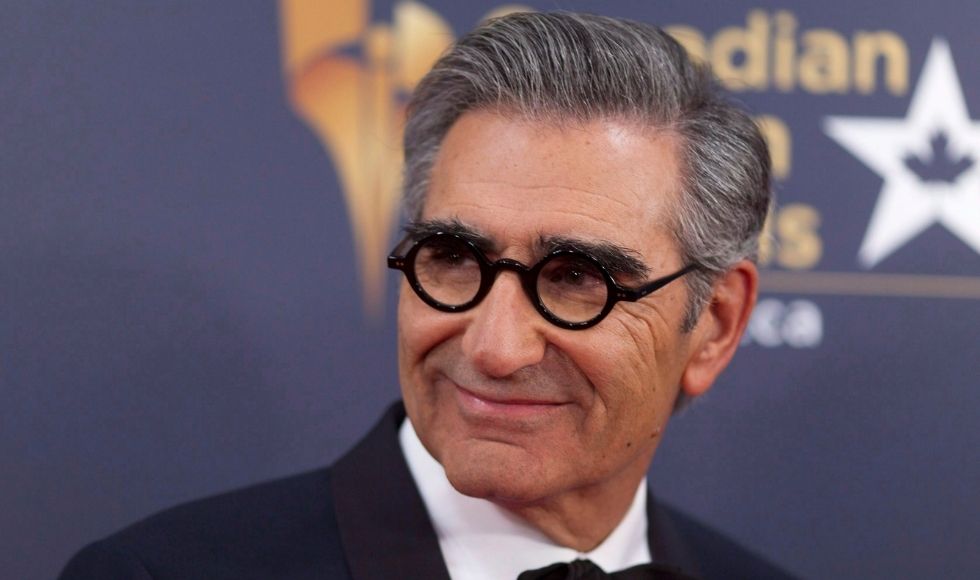 Eugene Levy, who co-created ‘Schitt’s Creek,’ with son Dan Levy, arrives on the red carpet at the 2016 Canadian Screen Awards in Toronto in 2016. (THE CANADIAN PRESS/Chris Young)

CBC’s breakthrough comedy Schitt’s Creek tells the story of the Rose family. The Roses, including parents John (Eugene Levy) and Moira (Catherine O’Hara), and grown children Alexis (Annie Murphy) and David (Daniel Levy), have been conned out of their wealth by Eli, their corrupt business manager.

They’re forced from their lavish home in California to Schitt’s Creek, a tacky, down-and-out small rural town. John, in better times, bought the title to the town for David as a birthday joke. Over time, however, Schitt’s Creek becomes the source of the Rose family’s redemption, saving them from not only potentially endless wandering in search of a new home, but also, to a large extent, their parochial world view.

Schitt’s Creek has won 102 awards, including a sweep of the 2020 Primetime Emmy Awards and 2021 Canadian Screen Awards for comedy. The cast has been lauded for their superb, on-point performances.

The show has also been recognized for its deft handling of a range of identity issues, particularly LGBTQ+ relationships, pansexuality, socio-economic class and Canadian-ness.

Yet Schitt’s Creek, co-created by real-life father-son duo Eugene and Daniel Levy, is also fundamentally about Jewish identity. Critics who ignore or simply miss the Jewishness of the characters fail to appreciate this key aspect of the show’s inclusive reach and appeal to diverse viewers.

Eugene Levy, Jewish in real life, is also Jewish as John Rose; John’s wife, Moira, is not. The show’s Jewish references are abbreviated, dropped in passing in a number of the show’s episodes.

A local man presumes that John has bagel expertise because he is Jewish in Season 2, Episode 5; Daniel explicitly describes himself as a product of a “delightful half-half situation” (referring to an interfaith family) in a Season 4 holiday special.

More references abound, for example, in Seasons 5 and 6: Daniel mentions his birthright trip, a reference to free, 10-day trips for Jews between the ages of 18 and 32 who have never before travelled to Israel, and Alexis recalls her bat mitzvah for which she wore a tiara. John reminisces about his boyhood Hebrew school baseball team, The Flying Latkes, and Moira references a Passover seder. Alexis sports a hamsa necklace featuring a hand shape with an eye (in Jewish understandings of the hamsa, the hand is symbolic of God’s hand, which wards off the evil eye). The episode “Sunrise, Sunset” is named after the song from the iconic Jewish musical, Fiddler on the Roof.

Schitt’s Creek also presents a new interpretation of the most central of historically Jewish themes: exile and diaspora.

Throughout history Jews have been “strangers in a strange land.” As described in the biblical story of Exodus, the Jews were forced from their homeland due to famine to reside in Egypt. Following the destruction of the First (586 BCE) and Second Temples (70 CE) in Jerusalem, the Jews were again forced into exile, living until today in diaspora throughout the world.

The Rose family is in exile in Schitt’s Creek. Yet the Roses, like so many Jews in diaspora, emotionally and personally grow in this strange land, adapting to their changed circumstances, although never wholly assimilating.

The show’s conclusion is at least suggestively symbolic of the range of solutions undertaken by Jews who have had to rebuild their lives time and again in diasporas throughout history: David opts to stay in Schitt’s Creek with his new husband, John and Moira return to California and Alexis goes to young American Jews’ very own Zion, New York City.

‘Jews of no religion’

In light of this evidence of Jewishness, it may be surprising for viewers who can see that religious belief and ongoing practice is minimal to nonexistent in the Rose family. There are no Jewish holidays or heartfelt discussions of the complex nature of Jewish identity. There is no mention of affiliation or identification with Reform, Conservative or Orthodox Jewish religious movements.

Yet the Roses’ Jewishness is unselfconscious and undeniable: They are not hiding their Jewishness out of fear of antisemitism or self-loathing. Their Jewishness, like Daniel’s pansexuality, is simply a fact, part of who they are as people, if not the basis for whatever spiritual beliefs they may or may not hold.

Indeed, the Roses offer many Jewish viewers a recognizable reflection of themselves. The Roses can be described as an example of the broad category of “Jews of no religion,” a term used by the Pew Foundation in its surveys of Jewish Americans.

A matter of inheritance

Four out of 10 Jewish American adults under the age of 30 identify as Jews of no religion; overall, Jews of no religion make up 27 per cent of American Jewry and 79 per cent of them are intermarried. This Jewishness, for many, is most akin to an inheritance, a link to the past that shapes, but does not solely determine, one’s sense of self in the present or future.

Many Jews of no religion are quick to argue that they are “not less than” Jews by religion. Being Jewish by religion is both a family inheritance (except in the case of converts) and a matter of belief. Jews of no religion separate family inheritance and personal belief, highlighting the fact that Jewishness is historically and in the present not only a belief system, but also a matter of history.

The Rose family, with love, sharp wit, endearing acceptance and fabulous fashion gives viewers a glimpse of Jews who know that they measure up quite nicely to just about anyone both within and outside of the diaspora of Schitt’s Creek.

Celia E. Rothenberg is an associate professor, Department of Religious Studies, McMaster University. This article is republished from The Conversation under a Creative Commons license. Read the original article.

Viral hit: Why some music is infectiously popular

The popularity of new music releases resembles the spread of infectious disease, researchers from Science and Humanities find.