Scientific texts by Galileo, Leonardo and Newton among the Library’s many hidden gems 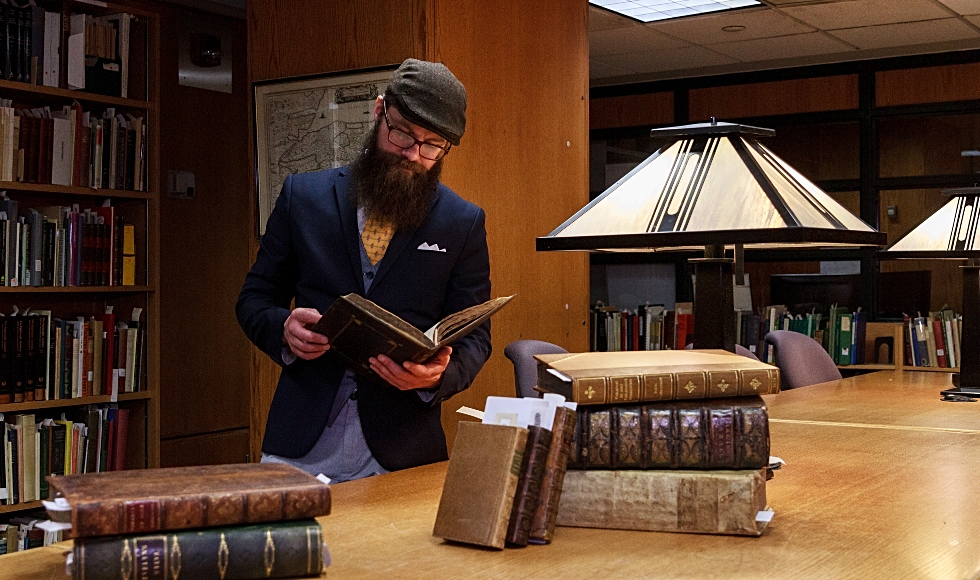 BY Myron Groover and Erica Balch

Galileo Galilei. Leonardo da Vinci. Sir Isaac Newton. Émilie du Châtelet. These towering figures are among the most influential scientific, mathematical and engineering minds of the past 400 years, each producing monumentally important writings that changed the course of human history.

Seminal works by these and other important scientific figures are among the many gems that can be found in McMaster University Library’s extensive rare books collection, and were also among a selection of works recently on display at a special open house hosted by the library as part of its year-long celebration of Science, Technology, Engineering and Math.

“McMaster is home to one of the best rare book collections in the country – and a great number of those volumes are related to science,” says Groover “Each of these works, in their own way, represents a remarkable scientific achievement; they hold tremendous cultural, historical and scholarly value. We are lucky to have such a wonderful collection here on campus.”

Below, Groover highlights some of his favourite scientific texts from McMaster’s collection, and explains what makes each of them so unique: First edition in Italian of Leonardo Da Vinci’s own work on optics, perspective, and colour. The manuscript was only published posthumously, but instantly became highly influential. Wortley Montagu’s attainments were numerous — she is rightly celebrated for her wit, her prose, and the astonishing breadth of her correspondence — but she also played an instrumental role in promoting smallpox inoculation. Having observed the practise during her travels in the Ottoman Empire, she defied convention and outraged the medical establishment by inoculating her children and encouraging others to do so. Here, Montagu describes the traditional Turkish practise of inoculation to a friend. NEWTON, Isaac. Opticks, or, A treatise of the reflexions, refractions, inflexions and colours of light : Also two treatises of the species and magnitude of curvilinear figures.(First edition; London, 1704)

This is a rare first edition of Newton’s groundbreaking work on optics, detailing his rigorous experimentation regarding the refraction and diffraction of light. It is widely considered, with Newton’s Principia, to be one of the world’s most significant scientific texts. Originally authored in English, the book was translated into Latin two years later. A first edition of Galileo’s colossally influential Dialogue, wherein he refines the Copernican model of a heliocentric solar system. Interpreted by the Roman Catholic Church as directly contrary to its teaching, the book was felt (rightly or wrongly) to be a direct attack on Pope Urban VIII, who had previously supported Galileo’s work. The ensuing controversy saw Galileo sentenced to house arrest for the rest of his life; the book remained on the Church’s Index Librorum Prohibitorum until the nineteenth century. Born into a minor aristocratic family, Émilie du Châtelet went on to become one of France’s most scintillating scientific minds. She was particularly interested in physics, mathematics, and philosophy; the publication of the Institutions de physique in 1740 led to her being one of the first women inducted into the Accademia delle Scienze dell’Istituto di Bologna. She is also remembered for her remarkable translation of Newton’s Philosophiae Naturalis Principia Mathematica— published posthumously after her tragic death in childbirth, it remains the standard French rendering of the Principia to this day. Handwritten on parchment, this copy of Boethius’ Consolatione demonstrates the intense working life of books in the medieval period. Extensively annotated to make use of as much of the writing support as possible, this manuscript demonstrates many generations of scholars emending and commenting on a text over time. Wide margins provided a convenient source of space for annotations, but also permitted such books to be trimmed and re-bound several times over the course of their useful life. This page shows Proclus’ model of the classical elements (Water, Air, Fire, Earth) and the relationships between their qualities (subtle, mobile, obsure, acute) — models like this informed Western conceptions of science, and medicine in particular, well into the nineteenth century.

Parkinson’s “Botanical Theatre” was, at the time of its printing in 1640, the magnum opusof early modern English botany. It catalogues nearly four thousand species of plants, including dozens which had never been previously described in English, according to a taxonomy devised by the author. Comprehensive in scope, lavishly illustrated, and drawing on a network of expertise that spanned the continent, it remained a standard text on English apothecaries’ shelves for over 100 years. John Ray, that other great 17th-century naturalist and taxonomer, described it as “…the most full and comprehensive book [extant on] th[e] subject.”

Parkinson, who served as Royal Apothecary to Charles I, was among the last of the great English herbalists. Somewhat unusually for an English herbal by such an august personage, the book focuses on practical hortology, with sections devoted to “the garden of pleasant flowers,” “the kitchen garden,” and “the orchard”. A planned fourth section, intended to enumerate medicinal plants, was eventually published separately as the Theatrum Botanicum. The title (“Park-in-sun’s earthly paradise”) is a Latin pun on the author’s name.

The McMaster community and the public are welcome to view rare books from McMaster’s collection by visiting the William Ready Division of Archives and Research Collectionslocated in the lower level of Mills Memorial Library on McMaster’s main campus. Learn more