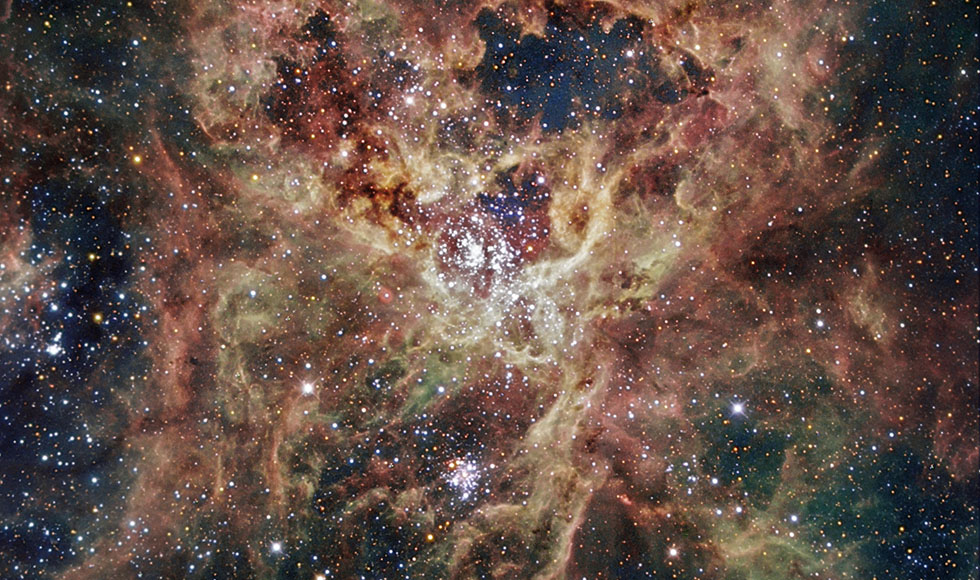 Clusters of stars across the vast reaches of time and space of the entire universe were all created the same way, researchers at McMaster University have determined.

Researchers Corey Howard, Ralph Pudritz and William Harris, authors of a paper published June 25 in the journal Nature Astronomy, used highly-sophisticated computer simulations to re-create what happens inside gigantic clouds of concentrated gases known to give rise to clusters of stars that are bound together by gravity.

Pudritz and Harris, both professors of Physics and Astronomy at McMaster, were Howard’s PhD thesis supervisors and guided his research. Howard recently completed post-doctoral research at the university.

The state-of-the-art simulations follow a cloud of interstellar gas 500 light years in diameter, projecting 5 million years’ worth of evolution wrought by turbulence, gravity and feedback from intense radiation pressure produced by massive stars within forming clusters.

The research shows how those forces create dense filaments that funnel gas into what ultimately become super-bright clusters of stars that can merge with other clusters to form vast globular clusters.

“Most stars in galaxies form as members of star clusters within dense molecular clouds, so one of the most basic questions in astronomy is how do clusters that range from hundreds to millions of stars form under a wide variety of conditions,” Pudritz says. “Our simulations were carefully designed to determine whether or not this a universal process.”

Listen to an interview with William Harris:

The authors programmed data for such variables as gas pressure, space turbulence and radiation force into their simulation and let it run using resources that included SciNet, Canada’s largest supercomputer centre.

After a month, the program turned out star clusters identical to those known to exist, showing that the researchers had managed to reverse-engineer the formation of star clusters, taking a major step towards understanding their formation, which has long been a subject of debate among astrophysicists.

Many had previously argued that clusters of different sizes and ages had formed differently, the authors said, but the new research shows they all form the same way.

The simulations show that the outcome depends on the initial reservoir of gas, that will, after turbulence, gravity and feedback have done their work, create clusters of stars of various sizes over the course of a few million years.

“This is the first convincing route to modelling the formation of star clusters,” Harris says. “It applies across all mass scales – little clusters and big ones – and it should work at any particular time in the universe’s history, in any particular galaxy.”

Such simulations would have been unthinkable even 10 years ago, the authors say. The success of this project, they say, suggests that similar research on other complex problems, such as the formation of entire galaxies down to the births of specific individual stars, could soon be within reach.