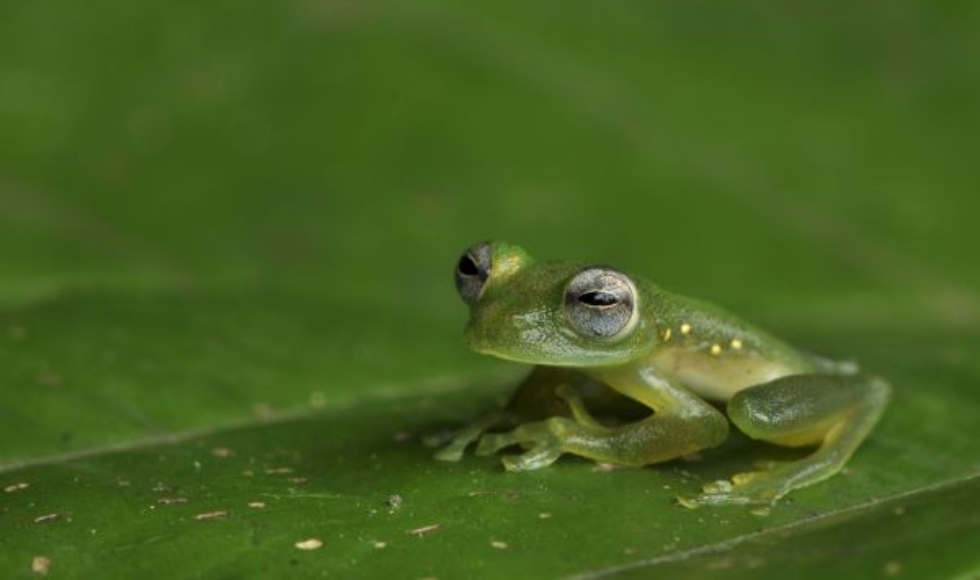 Glass frogs are well known for their see-through skin but, until now, the reason for this curious feature has received no experimental attention.

A team of scientists from McMaster University, the University of Bristol, and Universidad de Las Américas Quito, set out to establish the ecological importance of glass frog translucency and, in doing so, have revealed a novel form of camouflage.

Using a combination of behavioural trials in the field, computational visual modelling and a computer-based detection experiment, the study published in PNAS reveals that, while glass frog translucency does act as camouflage, the mechanism differs from that of true transparency.

“The frogs are always green but appear to brighten and darken depending on the background. This change in brightness makes the frogs a closer match to their immediate surroundings, which are predominantly made up of green leaves,” says James Barnett, who began the research while a PhD student at the University of Bristol and is now based in the Department of Psychology, Neuroscience & Behaviour at McMaster.

Researchers found that the legs are more translucent than the body and so, when the legs are held tucked to the frog’s sides at rest, this creates a diffuse gradient from leaf colour to frog colour rather than a more salient sharp edge. This suggests a novel form of camouflage known as “edge diffusion.”

Barnett said scientific debate had often been skeptical of the degree to which glass frogs can be called transparent.

“Transparency is, at face value, the perfect camouflage. It is relatively common in aquatic species where animal tissue shares a similar refractive index to the surrounding water. However, air and tissue are quite different in their refractive indices, so transparency is predicted to be less effective in terrestrial species. Indeed, terrestrial examples are rare. Although glass frogs are one commonly cited example of terrestrial transparency, their sparse green pigmentation means they are better described as translucent,” he said.

“Our study addresses a question that has been the topic of much speculation, both among the public and the scientific community. We now have good evidence that the frogs’ glass-like appearance is, indeed, a form of camouflage,” said Scott-Samuel.

Researchers suggest animal camouflage has long been a textbook example of the power of Darwinian natural selection and they are only beginning to unravel how different forms of camouflage actually work.