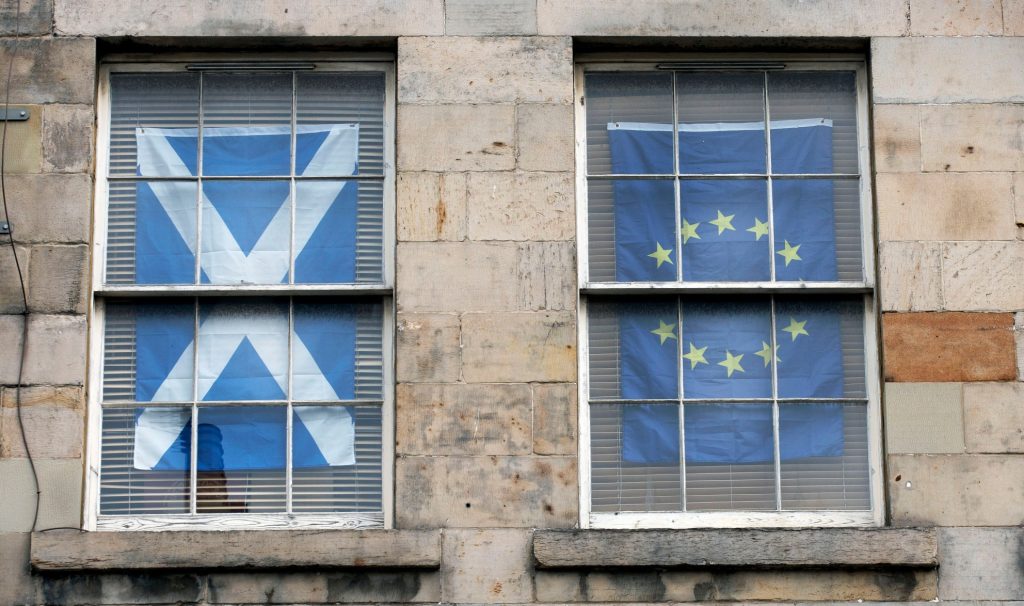 A Scottish Saltire flag hangs in the window of an apartment near the Royal Mile in Edinburgh, Scotland in August 2020. (AP Photo/David Cheskin)

If the Scottish National Party wins Scotland’s parliamentary election in five months, it will be with a mandate to hold a second independence referendum.

Scotland took the idea that a lawful path to independence exists from the Québec experience, more specifically from a Canadian ruling on Québec secession. If it comes to a constitutional crisis in the United Kingdom, however, the British balance of powers may make a Canadian-style compromise impossible.

With Brexit negotiations finally complete, a process of national reckoning will soon begin that may decide whether the British union survives with its political and constitutional traditions intact.

Scotland will be back soon, Europe. Keep the light on 🏴󠁧󠁢󠁳󠁣󠁴󠁿❤️🇪🇺❤️🏴󠁧󠁢󠁳󠁣󠁴󠁿 pic.twitter.com/qJMImoz3y0

Canada faced a similar reckoning in the 1990s after a punishing series of failed constitutional negotiations combined with a close referendum in Québec to make the independence question unavoidable.

Faced with the prospect of a successful vote in Québec, the Canadian government turned to the Supreme Court for advice. The 1998 Québec Secession Reference case established referendums as a lawful means to legitimate independence, acknowledged Québec’s right to secede and obliged all parties to negotiate an exit in good faith.

Canada was brought to this point because Québec held the power to poll its own electorate. Whether Scotland has the same right is disputed, so Scottish plans to hold an independence vote as early as 2021 sets up a messy confrontation.

The Canadian judgment held that so long as a referendum returned a “clear majority on a clear question,” the democratic implications of an independence vote could not be ignored. The decision was hailed at the time as even-handed; in reality it was a mixed blessing.

It promised to regulate the process of political divorce and offered the international community a yardstick for recognizing new states, but the question of what constitutes clarity was never resolved, merely assigned to the Canadian government to decide. Yet if a referendum delivers credibility and a duty to negotiate, the incentive for national governments to obstruct consultation among minorities soars.

Consider, for instance, the spectacle of riot police seizing ballot boxes in a 2017 Catalan referendum after the Spanish Supreme Court declared it illegal to poll voters on independence.

An unexpectedly close Scottish independence vote in 2014, followed by an unequivocal Scottish “no” to Brexit in the 2016 referendum, made divergent views within the U.K. more pressing.

The 2014 “indyref,” as it became known, was conducted under a joint Edinburgh-London agreement and used a co-negotiated question intended to settle the matter for a generation.

Scotland never conceded it needed the agreement, but it was in everyone’s interest to avoid testing the question constitutionally. Still, Scotland made Canadian-style clarity a watchword of its referendum exercise, and when the results turned out closer than expected, stakes were raised.

Fifty-five per cent voted against independence but only after an 11th-hour pledge to extend new powers to Scotland.

That was when EU membership was still a perk of union. Now, independence offers the best chance for Scotland to rejoin the EU. The Scottish government maintains Brexit makes a new vote necessary. The British government insists the matter is closed.

If support for independence continues to climb, Scotland’s demand will be hard to refuse without transparently muzzling popular voice. If the Scottish government presses ahead with plans for what London considers an unlawful vote, it could plunge the country into constitutional crisis.

How did Canada avoid the impasse looming in the U.K.?

In many ways it didn’t; the tensions of the 1990s nearly tore the country apart. The Canadian Constitution is no more enlightened than the British when it comes to secession. As the saying goes “the constitution is not a suicide pact,” and specifying terms for its expiry seems perverse.

But while some constitutions, like Spain’s, declare national union “indissoluble,” Canada’s is silent on the question. Canada largely inherited its constitutional structure from the British, although not entirely, and it crafted an extraordinary formula for reconstitution out of that legacy.

The Supreme Court judgment worked like oil on troubled waters, establishing rights for Québec and Canada alike. But it was the balance of power in the Canadian federation that ultimately proved the real saviour of Canada.

Because there was no stopping a Québec referendum, there was no silencing the independence question. The ruling defused the standoff by insisting an unwilling Québec could not be held hostage to union, and that a democratic federation meant heeding democratic voice.

Québec has declined to use its new right of democratically chosen exit. Simply having it acknowledged has so far proven sufficient. For democratic voice to be heeded though, it must first be heard.

By raising the stakes on independence votes, the judgment that saved the Canadian union may have made it more difficult to reach a solution in regions where national co-operation is needed to poll an electorate. In that case, it’s not the clarity of a referendum that matters — it’s the capacity to hold one at all.

Catherine Frost is a professor of political science. This article is republished from The Conversation under a Creative Commons license. Read the original article.

In the News: Allan Downey on the use of lacrosse in residential schools

Allan Downey, associate professor in McMaster’s department of history and Indigenous Studies Program, is helping to shine a light on the history of lacrosse and how it was used to assimilate Indigenous youth in Canada.