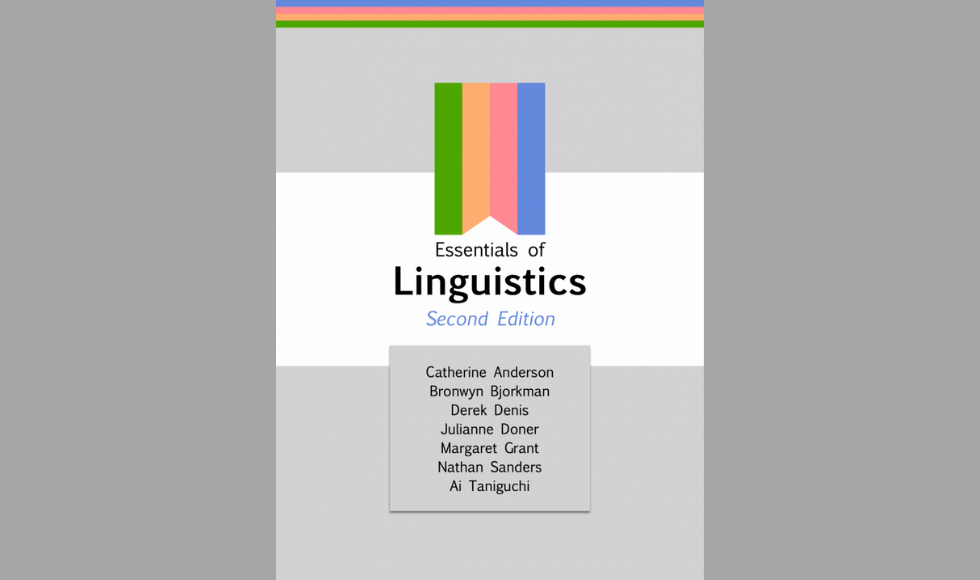 ‘Essentials of Linguistics, 2nd edition’ is a free online e-textbook designed to introduce students to the scientific study of language.

When Catherine Anderson proposed a talk about teaching linguistics at the Canadian Linguistic Association conference 10 years ago, she got rejected. No one, it seemed, was interested in hearing about the pedagogical side of linguistics, even though the Linguistics and Languages department’s introductory classes regularly attracted more than 600-800 students from across the university every semester.

This summer, at that same organization’s conference, it was standing room only as Anderson and other university linguistics instructors delivered a talk called “Teaching Introductory Linguistics with Justice.”

Lots has changed – and that’s partly thanks to a free, open-access e-textbook that debuted in 2018 and has now been released in its second edition.

In 2017, Anderson and colleagues from McMaster created Essentials of Linguistics, a free online e-textbook designed to introduce students to the scientific study of language.

Developed with support from McMaster and eCampus Ontario, Essentials of Linguistics was largely a response to the high prices charged by commercial textbook companies, and was intended to make high-quality information accessible to anyone who wanted it.

Downloads for the first edition of Essentials of Linguistics were recorded from 149 countries.

And once the pandemic forced schools to pivot to virtual classrooms in 2020, instructors across Canada became keenly interested in online resources. In fact, early in the pandemic, Anderson and her colleagues from universities all over the country started a community of practice dedicated to figuring out the best ways to teach introductory linguistics courses online.

Impelled by discussions in that group, as well as a general desire to improve and address critiques of the first edition, Anderson and her six co-authors began “a near-total rewrite” of the textbook, supported again by grants from eCampus Ontario’s Virtual Learning Strategy.

“Lots of things are different this time around, thanks to our authors — each of whom is a specialist in a sub-field of linguistics — and our collaborators, who have provided expertise on Indigenous languages and accessibility,” says Anderson, who is also the director of the Gender and Social Justice program in the Faculty of Humanities.

“One of the ways in which societal injustice gets expressed is through language. There’s a lot of racism that gets masked as concern for grammar or accent, so we’ve been really mindful to try and centre justice in this edition.”

Anderson explains that in a lot of introductory texts, justice issues are addressed towards the back of the book, in the final chapters. In the second edition of Essentials of Linguistics they’re in Chapter two, which is called “Language, Power and Privilege.”

Other developments include a concerted effort to include diversity in images and in examples, using a wider variety of languages to illustrate linguistic concepts. Hallmarks of older texts, including a tradition of exclusively using the names “John” and “Mary” and providing examples steeped in gender stereotypes, have been updated in favour of diverse names and situations.

The textbook also focuses on accessibility, using modality-neutral language that uses words like  “production” and “comprehension,” rather than “speaker” and “hearer,” and ensuring that diagrams are accessible to screen readers. There’s extensive coverage of American Sign Language, with recorded examples courtesy of David Wiesblatt, who has taught ASL at McMaster for several years.

The benefits to an online textbook, says Anderson, are numerous. Affordability, of course, is key, but there are other bonuses as well.

“All the students have access to the content from day one, instead of having to sign it out from the library, or download an illegal copy, or struggle to get the info some other way – and they can spend that $147 they’d pay on a commercial textbook on groceries, or childcare,” she says.

“It’s accessible in a variety of formats, including as an e-book, on the website and it can be printed if needed. We’re able to include multimedia much more easily, and have incorporated several videos. It’s also far easier to make corrections.”

Anderson says working with her co-authors (Bronwyn Bjorkman, Derek Denis, Julianne Doner, Margaret Grant, Nathan Sanders and Ai Taniguchi), has been key to the success of the book.

“The co-authors come from institutions across Canada, including McMaster, Queen’s, U of T, the University of Manitoba, and Simon Fraser University,” she says. “We’ve learned from each other, and the work we do is better because we’re doing it together. We didn’t just divide up the labour — we made decisions together.

“The end product is so much better than any of us could do on our own.”