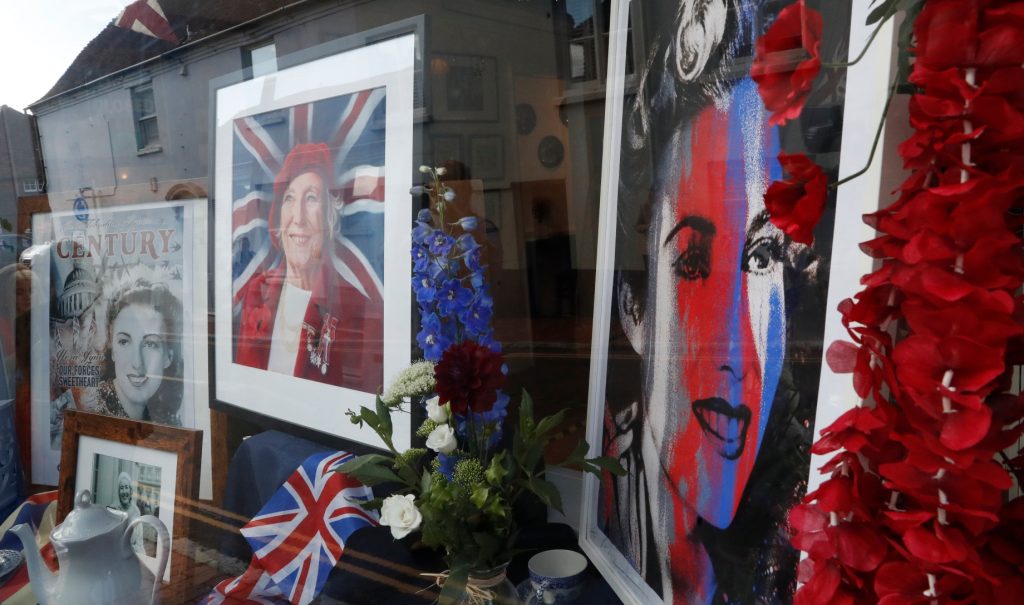 Photos of British singer Vera Lynn are seen in a window, as her funeral procession is led through the village of Ditchling, southern England, July 10, 2020. (AP Photo/Alastair Grant)

Since Dame Vera Lynn died June 18, there has been an outpouring of tributes rightly celebrating her fame as a singer and “the Forces’ Sweetheart” during the Second World War.

Lynn (born Vera Welch) had grown up in London’s working class East End and blossomed as a dance band singer in the 1930s. During the war, she became a beloved solo performer on stage, record and radio.

Once they reach the end of the war, however, some obituaries lose the thread. They skim over 75 years of Lynn’s remarkable life when, through hard work, public service and careful balance, she would adapt and change while sustaining — and sometimes challenging — her place in public memory.

It’s worth noting Lynn herself did not assume the public would still be interested in hearing her after the war. She briefly “retired” in late 1945, a few months before her daughter was born.

But she returned to the recording studio in late 1946. By early 1947, she was back on BBC radio, starring in her own show, and making solo appearances in variety theatres.

Some may assume that every “Rosie the Riveter” or Forces’ Sweetheart became a housewife after the war. But Lynn, like many women, continued to work outside the home. In her autobiography, she recalled a discussion with her husband, Harry Lewis, about which of them would have the career. Lynn’s earning potential was greater, as he was a musician who had been discharged from the Royal Air Force Squadronaires dance band, because of illness.

They determined Lewis would support Lynn as advocate and manager. Their loving and effective partnership lasted until his death in 1998.

As with many women in the public eye, the 1950s media worked to make Lynn relatable by emphasizing her roles as wife, mother and homemaker — and downplaying her professionalism.

The fact was that the 1950s were even busier for Lynn than the war years. Her popularity grew in the United States and in 1952, she became the first British artist to top America’s Hit Parade, with the nostalgic “Auf Wiederseh’n, Sweetheart.”

Lynn made the move to television in 1955, signing contracts with broadcaster ITV and then the BBC. As BBC Audience Research reported in 1957, audiences regarded the then 40-year-old as both a top contemporary entertainer and an admired “historic figure.”

She worked tirelessly for a range of charities, from veterans to children with disabilities and breast cancer research.

In 1975, Lynn was made a Dame Commander of the British Empire, in recognition of her charity work, an honour she described as “the high point of my career.”

During the 1970s, though Lynn sometimes described herself as semi-retired, she continued to present new material, both on her own television variety show and on albums such as Vera Lynn in Nashville.

In a September 1975 Radio Times profile of the newly made dame, the novelist Margaret Drabble observed, “Altogether, she’s a very odd mixture of hard-working professional artist and busy contented woman-about-the-house. Perhaps … that is why, so long after the war, she remains so potent a symbol.”

She also continued to perform at Second World War commemorations, up to her “final” performance for the 50th anniversary of VE-Day in 1995, when she was the closing act for a crowd of 100,000 in Buckingham Park.

In the process of sustaining her career, Lynn also laid the foundation for her enduring legacy as a Second World War icon, the “one singing voice above all others [that] had come to exemplify the courage, the determination and the refusal to be downhearted,” as she was introduced at the 1995 VE-Day concert.

Dame Vera, with her well-earned reputation for sincerity, kindness and courage, helped embody British memory of the Second World War as a “good war” in which Britain had fought heroically and alone against fascism. But no one becomes an icon alone and neither Lynn nor England triumphed through the war as solo efforts.

Though she never “aligned” with a political party, Lynn did not stay completely out of the political fray. In 2009, the xenophobic British National Party included her recording of “White Cliffs of Dover” on a fundraising CD without her permission. The Daily Mail reported Lynn was “furious” and that her solicitor was investigating legal action. (However, she no longer controlled the rights to the 1942 recording.)

Such nationalistic nostalgia is sometimes used to advance racist myths of Second World War Britain as a fundamentally white nation. This, despite the reality that Britain’s continental ties and colonial history have long made it a nation populated by diverse peoples.

It also overlooks the fact that the Second World War “was fought by the British Empire, not just by Britain,” as the historians Yasmin Khan of the University of Oxford and Gajendra Singh of the University of Exeter write. Britain depended upon troops, resources, and food from both its dominions (Canada, South Africa, Australia and New Zealand) and its colonies in Asia, Africa and the Caribbean.

Forgetting these histories has limited Britain’s reckoning with contemporary racism and the legacies of colonialism, including international conflicts of “post-war” Britain.

We can celebrate Dame Vera without mythologizing Second World War Britain, especially if we consider the full span of her life.

It is hard for any musician to sustain a long career, but it is especially hard for women, who are so often judged by their youth and physical attractiveness. Dame Vera had the curious experience of aging in the public eye. She was never far from her audiences’ memories of her younger Forces’ Sweetheart self, yet she evolved as an artist and philanthropist, and did not shy away from asserting control over how her image and music were mobilized.

We can celebrate the working-class girl who became a Dame, the working mother and philanthropist, the artist who sustained and built connections with fans everywhere and the woman who did her best to make the world a kinder, fairer place.

Christina Baade is a professor in communication studies at McMaster. This article is republished from The Conversation under a Creative Commons license. Read the original article.

Albert Einstein, Martin Luther King Jr, and John F. Kennedy are among the luminaries whose letters are featured in an online exhibit at McMaster focused on philosopher, peace advocate and Nobel laureate Bertrand Russell.

In households with children, the ramifications of shelter-at-home measures — which shuttered schools and child-care centres across the country while also prohibiting families from soliciting support with child care — have fallen disproportionately to women.