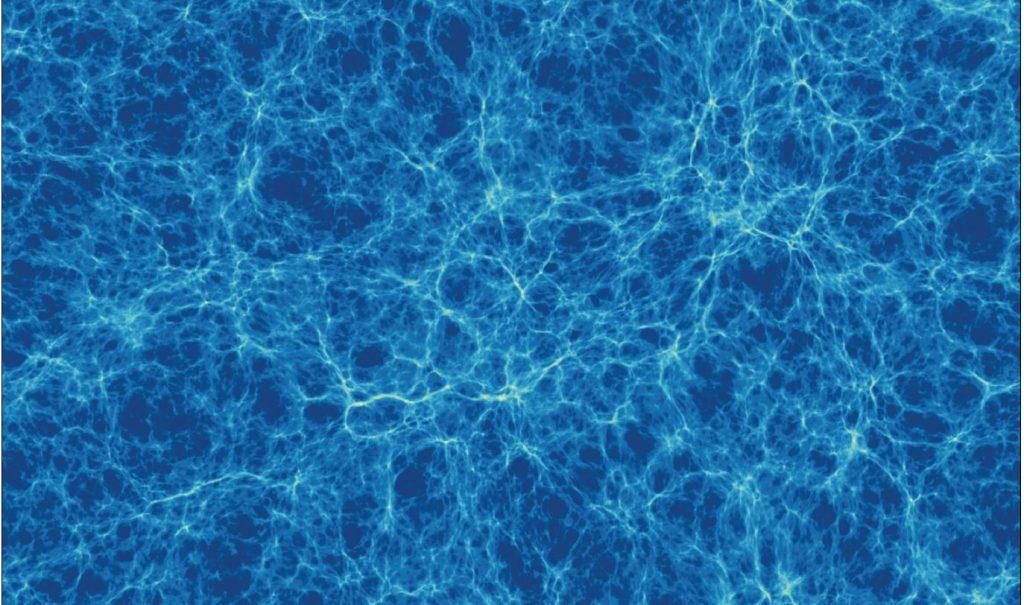 A simulation showing a section of the Universe at its broadest scale. A web of cosmic filaments forms a lattice of matter, enclosing vast voids. Credit: Tiamat simulation, Greg Poole.

BY Andrew Masterson, Science in Public

The direction in which a galaxy spins depends on its mass, researchers have found.

A team of astrophysicists analysed 1,418 galaxies and found that small ones are likely to spin on a different axis to large ones. The rotation was measured in relation to each galaxy’s closest “cosmic filament” – the largest structures in the universe.

The research was driven by the ARC Centre of Excellence in All Sky Astrophysics (ASTRO 3D), based in Australia. The lead author is Charlotte Welker, now a professor in the Department of Physics and Astronomy at McMaster.

“It’s worth noticing that the spine of cosmic filaments is pretty much the highway of galactic migration, with many galaxies encountering and merging along the way,” says Welker, an ASTRO 3D researcher who initially worked at the International Centre for Radio Astronomy Research (ICRAR).

The filaments are why the universe looks a little like a honeycomb, or a cosmic Aero chocolate bar.

Using data gathered by an instrument called the Sydney-AAO Multi-object Integral-field spectrograph (SAMI) at Australia’s Anglo-Australian Telescope (AAT), Welker, along with second author and ASTRO 3D principal investigator Joss Bland-Hawthorn from the University of Sydney and researchers from Australia, the US, France and Korea, studied each of the target galaxies and measured its spin in relation to its nearest filament.

They found that smaller ones tended to rotate in direct alignment to the filaments, while larger ones turned at right angles. The alignment changes from the first to the second as galaxies, drawn by gravity towards the spine of a filament, collide and merge with others, thus gaining mass.

It is a phenomenon that Dr Welker likens to roller-skating in the company of a friend.

“The flip can be sudden,” she says. “Merging with another galaxy can be all it takes.

“Imagine you are skating after a friend and catching up. If you grab your friend’s hand while you are still moving faster, you will both start rotating on a vertical axis – a spin perpendicular to your horizontal path.

“However, if a small cat – a much lighter bit of matter – runs after your friend and jumps on her she probably won’t start spinning. It would take a lot of cats leaping on her at once to change her rotation.”

Co-author Scott Croom from the University of Sydney, also an ASTRO 3D principal investigator, says the result offers insight into the deep structure of the universe.

“Virtually all galaxies rotate, and this rotation is fundamental to how galaxies form,” he says.

“For example, most galaxies are in flat rotating disks, like our Milky Way.  Our result is helping us to understand how that galactic rotation builds up across cosmic time.”

He adds that a new instrument, called Hector, set to be installed at the Anglo Australian Telescope next year, will enable a significant expansion of research in the field.

“Hector will be able to carry out surveys five times larger than SAMI,” he says. “With this we will be able to dig into the details of this spin alignment to better understand the physics behind it.”

The Milky Way, by the way, has a spin well aligned with its nearest cosmic filament, but belongs to a class of intermediate size galaxies that, over all, show no clear tendency towards parallel or perpendicular spins.

“It’s like saying that there is no preference for tea or coffee among a group of people,” says Welker. “Individuals may still prefer either tea or coffee, but overall there is no general tendency towards coffee in the group.”

The research has early access availability in the journal Monthly Notices of the Royal Astronomical Society (MNRS), and is also available in full on the preprint site arxiv.

ASTRO3D is the ARC Centre of Excellence for Astrophysics in 3 Dimensions.