Stronger than steel, stiffer than Kevlar 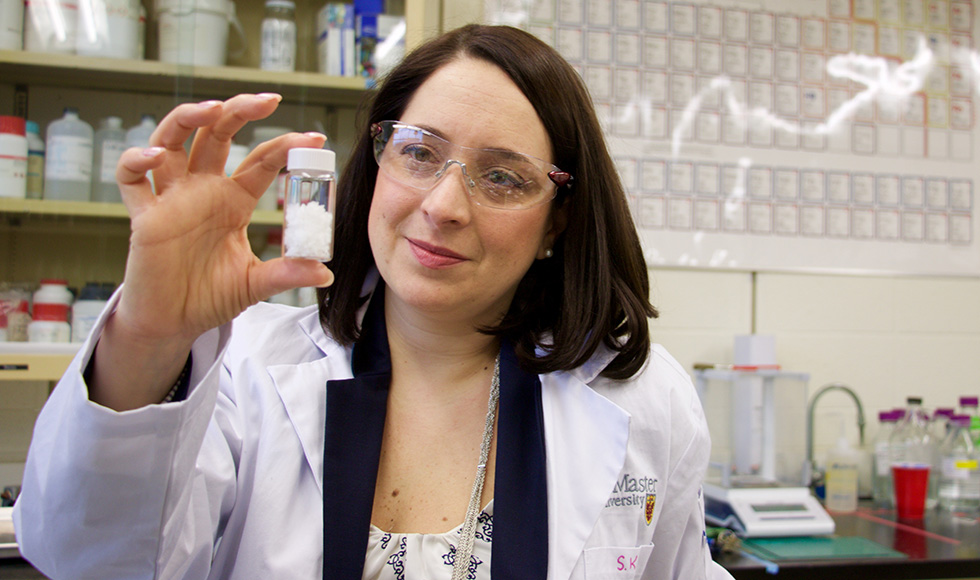 When Emily Cranston’s sister found out the McMaster chemical engineering professor had been named the Canada Research Chair in Bio-Based Nanomaterials earlier this year, she decided to poke a little fun at what little is known of her sister’s research area.

“For all your nanocellulose needs …” her Facebook post started, and then went on to invite people to request things made of nanocellulose, a light, strong material derived from wood fibres – and the focus of Cranston’s research.

“The kids’ requests were the best,” laughs Cranston from Grenoble, France, where she’s currently on research leave at “cellulose Disneyland” – or, more formally, Université Grenoble Alpes. “I got asked for a nanofort. Someone even requested an invisibility cloak made out of nanocellulose.”

While an invisibility cloak may still be in the theoretical stage, the other requests weren’t all that far-fetched. That’s because nanocellulose is a material with a lot of potential applications – the whiskery, needle-shaped particles are lightweight, stiffer than Kevlar, stronger than steel, non-toxic and, perhaps best of all, completely renewable and biodegradable.

“Cellulose is the main structural component of trees – and that structure is what makes it so useful. It’s also the most abundant material on earth,” explains Cranston. “Nanocellulose can be used to improve the strength of existing materials, as an adhesive, or to stabilize or modify food products and cosmetics. Essentially, using nanocellulose – a natural, non-toxic material that we can produce from plant waste – means we can stop using synthetic chemicals in many different applications.”

It wouldn’t seem like mending/repairing/healing broken bones and making sure a jar of face cream doesn’t separate would have much in common, but those are some of the specific “real-world” applications Cranston is investigating with her research team.

And that is just the beginning. From strong, lightweight body armour to ultra-flexible electronic screens to water remediation technologies, the material has almost infinite potential – and is a sustainable, renewable economic boon to Canada’s forestry industry.

A focus on sustainability has been part of Cranston’s life since her undergraduate days studying chemistry at McGill, when she designed a website for Canadian Green Chemistry Network and became interested in using chemistry to develop sustainable processes, materials and devices.

A career in academia might have seemed inevitable – especially considering her father is a chemist.

In fact, if Cranston hadn’t missed the deadline to apply to teacher’s college after she finished her BSc, her career might have had a completely different trajectory. As it was, Cranston, who grew up in Waverley, a suburb of Halifax, completed her PhD in materials chemistry at McGill in 2008 and then went on to a post doctorate at KTH Royal Institute of Technology in Stockholm, Sweden.

She’s been at McMaster since 2011, and is now an associate professor as well as a new Tier 2 Canada Research Chair.

Along with the obvious environmental benefits of her work, the challenge of finding new ways to solve old problems also has its appeal, as does putting her theories into action.

“For me, this is an exciting area to work in not only because of the impact on human health and the environment, but because of the need for creativity and innovation – there’s a lot of work to be done to lessen our dependence on fossil fuels,” she says. “To me, being creative and coming up with ideas but then actually building the materials is exciting. It’s not just math and science – there’s some art to it, too.”