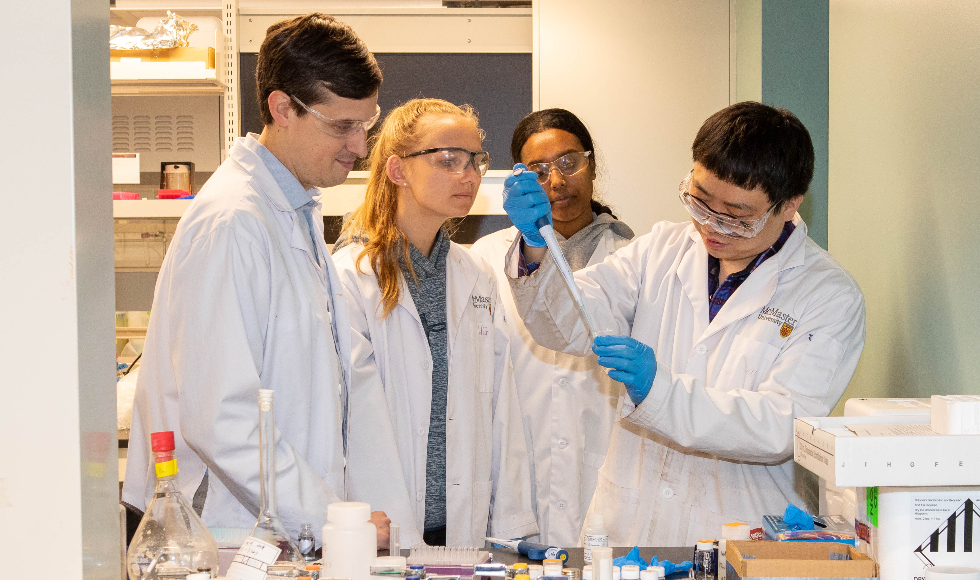 Hydrogels – polymer networks that can hold many times their own weight in water – are what make soft contacts soft, diapers absorbent and Jell-O jiggle.

Developing hydrogels that respond to environmental changes – disease, for example, or a magnetic field – is what the Laboratory for Engineered Smart Materials does.

Oh, and they work on diapers, too. (It’s surprisingly complicated to get the polymers in Huggies to absorb the right amount of liquid at the right speed.) In fact, industrial research is a big part of what the lab does.

Current projects with industry include work with Kimberly-Clark (the company that makes Huggies), and, among others, a recently announced partnership between the biotech company Ceapro, the Canadian Institutes of Health Research, the National Sciences and Engineering Research Council of Canada, and two other McMaster researchers to develop polymer scaffolds that could help treat idiopathic pulmonary fibrosis, as well as antibiotic-resistant infected wounds.

Hoare’s lab purposely bridges the gap between engineering and chemistry.

Because of that, the undergrads, grad students and postdocs who work in his lab have an interesting mix of academic backgrounds, including chemical engineering, biomedical engineering, chemistry, biochemistry and even neuroscience.

The diversity extends beyond academics: the lab also has researchers from seven different countries, the majority of them women.

Another aspect of Hoare’s lab that’s completely intentional is the number of undergraduate students working there: 12 at last count. With research often seen to be reserved for graduate students, Hoare points out that hiring undergrads provides them with valuable experience: assigned their own projects, they get to see what research is really like, away from the somewhat artificial environments of lab courses.

“Some leave, saying, ‘I never want to do this again,’ because research involves a lot of failure, and some people don’t like that,” he says. “A lot of them, though, catch the bug and keep going. Since I started my lab in 2008, 21 students have gone on to graduate school – and a good number of them wouldn’t have thought of that until they got into the lab and saw what it was like.”

Great to see one of our lab alumni doing great things! Now, the challenge – how to use hydrogels in nuclear power generation… https://t.co/CE6T9kVtWQ

It’s not just the undergrads who benefit from being in the lab – their supervisors get the management experience that they’ll need once they start their careers, whether they stay in academia or move into industrial work.

“We’ve worked with both researchers in ways that maybe we wouldn’t have before, because students are now sharing the same office space and talking,” he says. “A lot of the disciplines are merging, because we’re recognizing that the problems we have to solve are not simple problems, so you have to bring people from different backgrounds together to address them.”