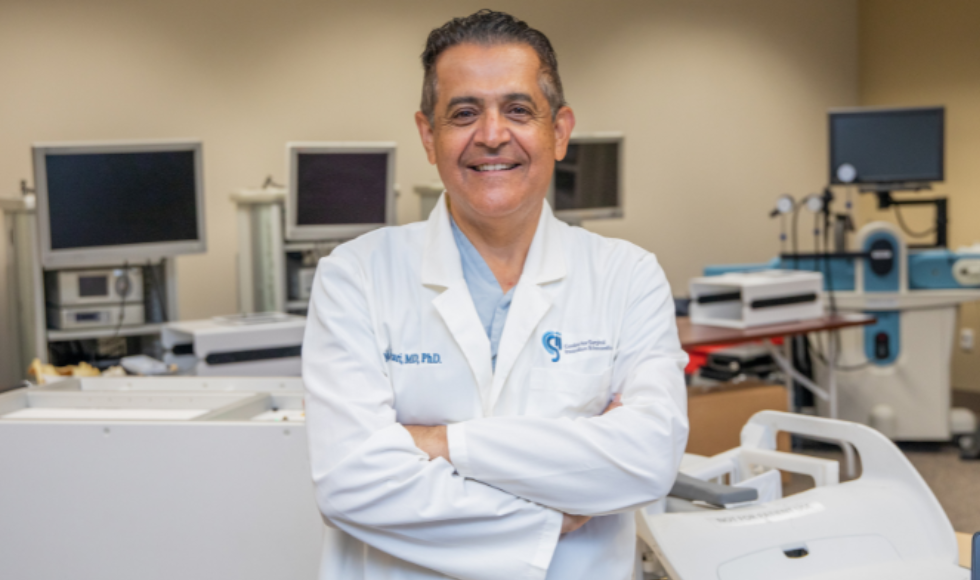 Mehran Anvari is at the forefront of a project to develop robot-assisted biopsy and diagnostics for breast cancer. (St. Joseph's HealthCare Hamilton)

Mehran Anvari has always been something of a pioneer.

He performed one of the world’s first remote-controlled robotic surgeries — he was in Hamilton; the patient was in North Bay.

Anvari, a professor of surgery, has also tested how remote surgery could be performed in space, working with NASA astronauts in a laboratory 19 metres underwater off the Florida Keys.

Now, Anvari is at the forefront of a project to develop robot-assisted biopsy and diagnostics for breast cancer, using technology first pioneered on the space shuttle’s Canadarm.

He is furthering his vision with Paul Chipperton, CEO and president of Insight Medbotics Inc. (IMI), through a $435,000 grant from the McMaster Seed Fund (MSF). They plan to market their product in the U.S.

“The care patients receive for breast cancer is still not ideal, and while MRI scans can provide highly detailed images, they may detect small lesions that may or may not be cancer and must be checked by radiologists in big-city hospitals,” says Anvari, who is the scientific director and CEO of the Centre for Surgical Invention and Innovation.

Anvari is also the founding director of the Centre for Minimal Access Surgery; and the McMaster Institute for Surgical Invention, Innovation and Education. And he’s a surgeon at St. Joseph’s Healthcare Hamilton.

Space-age treatment from across the planet

NASA recognized Anvari’s work in robotic medicine in 2015 for his work on the image-guided automated robot (IGAR) that detects cancerous lesions, in doing so bringing space technology back to Earth.

IGAR works in combination with MRI scanners to find lesions. The robot streamlines the manoeuvres involved in MRI scanning, in turn speeding up patient flow through the clinic.

“By automating this procedure using robotics, we can avoid the need to transfer patients to specialized hospitals. Instead, we are providing improved care to patients wherever they live,” Anvari says.

Women over 40 should at least have an annual mammogram, but these X-rays do not always detect cancerous lesions, Chipperton says. Mammograms are even less effective in women with “dense” breast tissue — more than 25 million women of breast-cancer screening age in the U.S. — as regular and cancerous tissue appears similar in these patients.

For these women, and women with a genetic predisposition to breast cancer, accurate and detailed scans are essential.

While MRI scans are recommended for such patients, a lack of trained radiologists in rural and remote communities forces many women who need MRIs to go without.

“Eventually we intend to build robots that can provide ‘one-stop shopping’ for diagnostics, biopsies and treatment for patients in remote areas, but we still need the regulatory approval,” Anvari says.

‘From Toronto to Tuktoyaktuk’

For now, IMI is focusing its marketing efforts on the U.S., as its for-profit health-care system can quickly implement and adapt to new technology, Chipperton says.

“American health-care systems pay. If there is both a supply and a demand, a transaction will take place,” Chipperton says.

“We are finishing the relevant documentation we need to submit to the U.S. Food and Drug Administration for regulatory approval within the next six months.”

IMI’s new product will still be rolled out in Canada, he says, with high-profile medical professionals in major cities using and validating the robotic MRI platform.

Once radiologists, oncologists and others in the breast cancer care community use such systems and provide feedback, the robotic technology can be more widely implemented, Chipperton says.

“Mehran believes there will be a trickle-down as the robotics technology is perfected, to deliver telemedicine in rural and remote Canadian communities,” Chipperton says.

“Our ultimate vision is a national health care system that is available from Toronto to Tuktoyaktuk, made possible by telemedicine and robotics.”

Since he conducted his first telerobotic surgery in 2003, Anvari’s robotics prowess has led to research support from the Canadian Space Agency and NASA, with 12 patents being created.

Anvari said the robotics technology under development could be used in future space missions to help astronauts in medical distress.

Before helming IMI, Chipperton was co-founder and CEO of Profound Medical Inc., where he raised more than $16 million to establish clinical trials of a new MRI-guided thermal treatment for prostate cancer.

His former startup is now listed on both NASDAQ and the TSX.

“Not many people get to work on projects and build companies that can change people’s lives, both figuratively and literally,” Chipperton says.

“There is an altruistic satisfaction that you don’t get with most jobs.”

IMI is well ahead in its regulatory and pre-commercialization activities, he says, but financing for the new robotics technology is still in its early stages.

“The McMaster Seed Fund is absolutely vital for us in securing regulatory clearance, which is among the most challenging goals of any medical technology company, and the most valuable inflection point in any company’s life.”

IMI’s proposal was one of 18 submitted to the McMaster Seed Fund from a variety of disciplines within the faculties of engineering, science and health sciences, says Karen Mossman, McMaster vice-president of research.

“The McMaster Seed Fund was designed to foster our culture of commercialization and social innovation across the university in an effort to positively impact society and it is certainly living up to its mandate.”

The fund was established to enable startups at the university to complete value-add experiments or validate their market that will best position them for a series A investment.

IMI was recommended for funding based on the quality of the team and the technology.