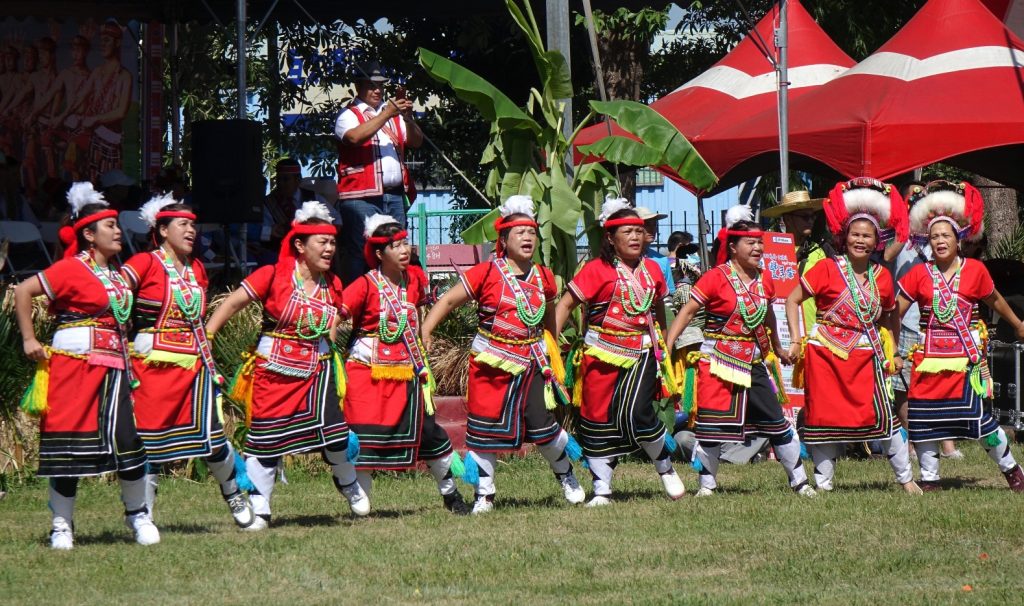 Members of the Indigenous Amis tribe in traditional costumes participate in the yearly harvest festival in Kaohsiung, Taiwan in September 2018. (Photo from Shutterstock)

Cassandra Preece is a PhD student in Political Science at McMaster University. This article is republished from The Conversation under a Creative Commons license. Read the original article.

Now that the dust has settled, it’s time to reflect on the quality of democracy in Taiwan.

While international media coverage has been blinded by China’s rising authoritarianism and Taiwan’s fight against it, there’s been little attention paid to Taiwanese domestic issues like economic development, clean energy and human rights.

Who are Taiwan’s Indigenous peoples?

There are currently 16 officially recognized Indigenous tribes in Taiwan, representing more than half a million people. Taiwan’s Indigenous communities claim thousands of years of history on the island before the first foreign settlers arrived in the 17th century.

Like many Indigenous populations around the world, Taiwanese Indigenous communities continue to fight for land rights, cultural recognition and improved socio-economic conditions. For many Indigenous peoples on the island, relations between Taiwan and China are far down on their list of priorities.

Despite a substantial legal system of Indigenous protections and a formal apology from President Tsai in 2016, Indigenous peoples remain poorer and less educated than the rest of Taiwan’s population.
Challenges associated with mining and energy projects on their traditional land continue in the midst of significant protest. There are several Indigenous tribes still fighting for official recognition from the government. These issues need to become an increasing part of the public agenda. But how?

How to get a voice in government

Indigenous activists and social movements play a crucial role in advocating for increased rights and generating awareness. But Indigenous and allied voices need to be better represented among political decision-makers. Representation of Indigenous voices starts with elections.

Taiwanese elections include three distinct races for legislators: 73 seats are elected from specific districts; six seats are reserved for Indigenous Taiwanese from two nationwide districts; and 34 party-list seats are filled through a proportional system, where each party provides a ranked list of candidates to be elected based on the party’s vote share.

Indigenous candidates cannot run for the 73 district-level seats. They can run as independents or via a political party for the reserved seats and can be selected by parties for a chance at the party-list seats.

The reserved seats were first introduced in 1972 as a symbolic acknowledgement of the distinctiveness of the Indigenous population. Two nationwide districts — one highland and one lowland — have remained a feature of the reserved seat system since 1980.

For the party-list seats, Indigenous candidates must be handpicked by political parties. Their chances of winning one of these seats is dependent on how many Taiwanese voters support their party at the polls and where they’re ranked on the list.

How did Indigenous candidates fare in 2020?

In the 2020 election, Tsai’s party won two of the six reserved Indigenous seats, the opposition Kuomintang party (KMT) won three of the six, and the final seat was picked up by an independent candidate.

The DPP and KMT each included one Indigenous candidate on their party lists. The DPP’s original party list included Indigenous activist Tuhi Martukaw as their No. 1 candidate — meaning an almost guaranteed seat. After internal conflict within the DPP, however, Martukaw was dropped from the final party list altogether.

The reserved seat system is not unique to Taiwan — in fact, legislated quotas for ethnic minority and Indigenous representatives have been implemented in more than 30 countries around the world. These quotas are often established to promote diversity, address historical injustices or mitigate ethnic conflict.

Ultimately, reserved seats and other forms of quotas often increase the numerical presence of minorities in the legislature. Enhanced representation through the reserved seat system can be a good thing, but is it sufficient in Taiwan?

Problems with the current system

The 2020 election results are cause for concern — no Indigenous candidate was elected outside of the reserved seat system and only one of those reserved seat representatives provides a voice beyond the two major political parties. It’s time to discuss potential changes to enhance Indigenous representation in Taiwan.

Critics of the current electoral rules in Taiwan highlight a number of issues for Indigenous representatives and Indigenous voters. For representatives, the threshold to win one of the reserved seats is lower than the district-level seats for non-Indigenous candidates, leading to an under-representation of Taiwan’s smaller Indigenous groups.

In 2020, five of the six representatives are from the top five largest tribes in the country. And even though Indigenous legislators often speak more on issues related to Indigenous interests, most of them are still bound by the ideas and rules of their political party.

For Indigenous voters, the current system prevents many of them from having an impact on the election of representatives where they live. Right now, there is a limited connection between individual voters and their chosen representative because reserved seats are elected through nationwide districts.

What can be done?

Kolas Yotaka, a former Indigenous representative and current spokesperson for the executive branch of the Taiwanese government, has argued for change. She says, “When the majority or even half the Indigenous population are living in the cities, they should have the right to run in cities and not only for Indigenous seats.”

Allowing Indigenous candidates to run and Indigenous voters to cast ballots in district-level races means that Indigenous people will be more likely to have someone speaking for them and representing their unique interests in the legislature.