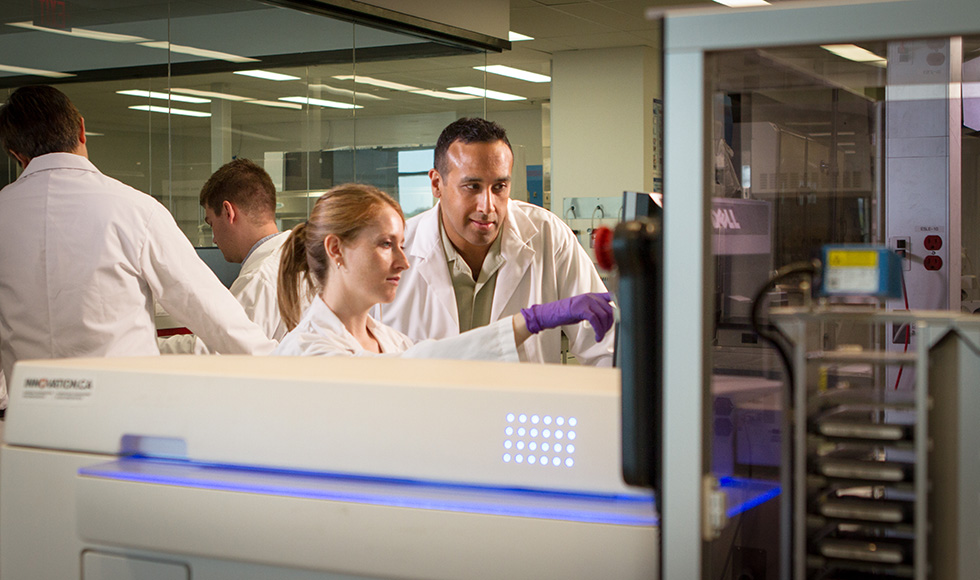 Mick Bhatia has been called the Wayne Gretzky of stem cell researchers.

But for this “Great One”, who has built McMaster’s Stem Cell and Cancer Research Institute (SCC-RI) from the ground up, it’s as much about teamwork as individual effort.

“It wasn’t about Wayne Gretzky getting the goal – it was about making the right pass with the puck: he knew how to move it around, he knew how to motivate and he was surrounded by a support network,” says Bhatia.

McMaster’s SCC-RI is unique in function and design compared to other biomedical institutes. It’s a collaborative group of individual faculty members and programs, all using cutting-edge facilities in a large-scale shared laboratory, performing innovative studies with a focus on translating discoveries into clinical applications.

SCC-RI researchers are working with human stem cells to improve health-care options for patients who currently have few or none. Their areas of focus are blood, cancer and the nervous system.

“Now more than ever, human stem cell research is important because it really deals with the worst of the worst diseases and ailments affecting Canadians,” says Bhatia.

“The research focuses on something very challenging, which are the diseases where there are no medicines, there are no surgeries and there are no long-term rehabilitative treatments for recovery. It requires a basic level of immediate intervention and urgency.”

Bhatia never anticipated he would become an internationally-known stem cell researcher when he came to McMaster in the late 1980s. As an undergraduate student pursuing a bachelor of science degree, his interest was primarily in physics and mathematics.

Shortly into his degree, he fell into biomedical sciences and was hooked. He was drawn to stem cell research, in particular, as he recognized the medical need for solutions to complex health issues, of which stem cells are at the centre.

As such, one of Bhatia’s areas of focus is cancer. More specifically, he is examining the parallels between the behaviour of stem cells and the initial stages of the development of human cancer in order to better understand how cancer begins in the first place, and then how to diagnose it early to hopefully stop it.

“I hope that either through my collaborators or through my own group, we were able to cure a particular type of cancer,” he says in a hushed tone.

“I say this in a whisper because this requires discovery, and you can’t focus on a discovery when doing research; discovery happens by accident. Accidents happen through activity and keeping yourself open to every possibility.” Bhatia is motivated by the numbers that one in two Canadians will be diagnosed with cancer. Furthermore, one in four Canadians will die from cancer with the current therapies.

“These are staggering statistics that no one likes to talk about,” he notes. “And of course, like many Canadians, I also have friends and family who have cancer. You see it, you live it. If you can feel you can do something about it, it is a pretty big driving force.”

Bhatia was named the inaugural director and senior scientist of the SCC-RI in 2006 when the institute was first developed by John Kelton, a renowned McMaster professor and hematologist who was then dean and vice-president of the Faculty of Health Sciences.

“When I envisioned the stem cell research institute at McMaster, I knew it had to be led by an ambitious researcher,” says Kelton.

“Mick was a natural choice as a leader in his field. He and his team have made dramatic discoveries and built an international reputation.”

Bhatia says he is extremely proud of the calibre of the team of faculty members that has assembled in the institute, as a result of the support from Hamilton and McMaster, and the shared visions of individuals like Michael DeGroote, David Braley and the Boris family, who have all placed their hopes in stem cell research and its future.

He notes that because of this support, they are in the midst of various stages of clinical trials, regularly publishing in the most prestigious journals throughout the world, invited to speak at international conferences and considered among the best in the field of stem cell research.

Bhatia speaks excitedly about the future of the institute.

“I think we have laid the bricks for the basement, but we’ve got three, four, five more storeys to go,” he says.

“As you can only build as high as your foundation will support, our foundation had to be very strong. It had to be based on pure, good science and solid scientific practices, and I think that is what we’ve done. We are poised uniquely for the future and building the next level from here.”

As for his own research, Bhatia continues to take chances with the hopes of an encounter with great discovery.

“Anything truly worth it is going to be risky,” he says.

“If it is easy and predictable, it has probably already been done and that’s not what an institute of this calibre should be doing.”