How to succeed in business … and make a difference 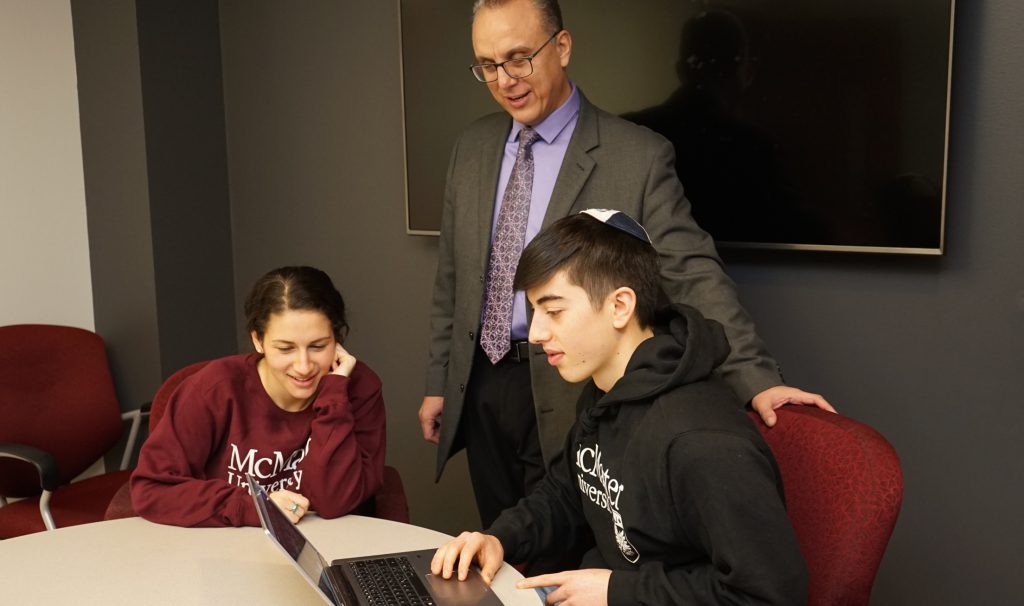 Professor Emad Mohammad is the driving force behind the Integrated Business and Humanities program, an innovative program that emphasizes socially responsible business leadership.

For an accounting professor, Emad Mohammad cares about a lot more than just the bottom line. His eyes are on a much bigger prize. And they light up when he talks about it.

“We’re teaching future leaders here,” Mohammad says. “They need to know that every decision a leader makes has an impact that goes well beyond the money.”

Mohammad radiates enthusiasm as he explains his vision for an education that emphasizes responsible business leadership and global citizenship — a vision that led him to create the cross-disciplinary Integrated Business and Humanities program, an ambitious partnership between the DeGroote School of Business and the Faculty of Humanities.

The program, now in its second year, helps students gain a better understanding of their business decisions in a global context. Mohammad also wants them to develop good people skills along with their business acumen.

And he knows he’s not the only one.

The School of business is transforming its Bachelor of Commerce program, with an emphasis on problem-based discovery, interdisciplinary study and interaction with business leaders that will prepare graduates to prosper in the quickly-changing conditions of the business world itself.

“Employers increasingly say they want business graduates who also have the ability to think critically, communicate, show emotional intelligence — skills that humanities students learn from Day 1,” Mohammad says. “You don’t take a course in emotional intelligence. It’s something you build with time and experience.”

Humanities also teaches students to look for context and see the world in new ways, Mohammad points out. “The human perspective, the historical perspective, the cultural perspective — these things that give depth to the business education, far beyond the market economy.”

Mohammad didn’t want to create an undergraduate commerce degree that required its students to take a few humanities courses, or vice versa. He and his colleagues from both faculties designed the IBH program to be truly interdisciplinary, a full partnership that offers tailor-made courses focused on responsible leadership with a meaningful impact.

In addition to the typical business classes like economics and accounting, first-year courses include peace studies, ethics, inquiry and insight, a course called IBH in the Community, and one called Leadership Coaching.

“If you want to change the world, you need people who can actually effect change,” Mohammad says.

Integral to Mohammad’s vision for the IBH is the idea of a global perspective that shapes entrepreneurship and through it, the community.

“We want our students to observe, learn and reflect,” he says of the program’s emphasis on community engagement and global citizenship.

That’s an important aspect of the program in second year, when the students travel abroad to see first-hand the effects of a global economy. In October, Mohammad joined the first cohort of IBH students on a trip to Ecuador.

“They connected some of the concepts they learned in their first-year humanities courses to what they saw there,” he says. “In fact, a group of our students had written about problems with access to clean water in the Napo River in their first year, and that is where we went. They actually got to see first-hand how these problems actually affect real lives.”

The students talked to an Ecuadorean woman who opened a small grocery store to give her kids more stability because farming is an increasingly unreliable source of income. Setting up the store was a long, expensive process and now that it’s up and running, she still faces many challenges, he says.

“We were asking her about profit margins and she said she no longer stocks the item that had the highest margin of all: Beer. She stopped selling it because of the social impact on her community.

A labour of love

It took four years and an immense amount of collaboration, support and yes, leadership from colleagues in both faculties to conceptualize and launch the IBH program in 2017 — “You should see how dark my hair was in 2013,” Mohammad jokes, running a hand over his head.

He sifts through hundreds of applications to hand-pick the students who are accepted into the program, considering their grades, leadership experience, résumés and video interviews.

With the program’s limited enrolment and small class size, he gets to know every student personally.

So how does an associate professor of accounting come to spend so much time and energy on a project like this?

Mohammad, who has been talking animatedly about his students, falls silent for a moment, thinking.

“I think it’s about purpose in life,” he finally says.

“I wanted to have a meaningful impact. I’ve been dedicated to this in the last five or six years and the passion I have for it is because it’s making a difference.

“When you do something you like, it keeps you energized all the time and keeps you resilient in the face of difficulties. And I feel this program, this is it.”

Darren Lawless' job is to connect people. So how does that work during a pandemic?

How COVID-19 could transform non-profit organizations

The COVID-19 pandemic has revealed how non-profit organizations operate and how they’re funded. Whether it will be enough to help the non-profit sector address growing social problems remains to be seen.