Teen award-winner and inventor excited to join McMaster in September 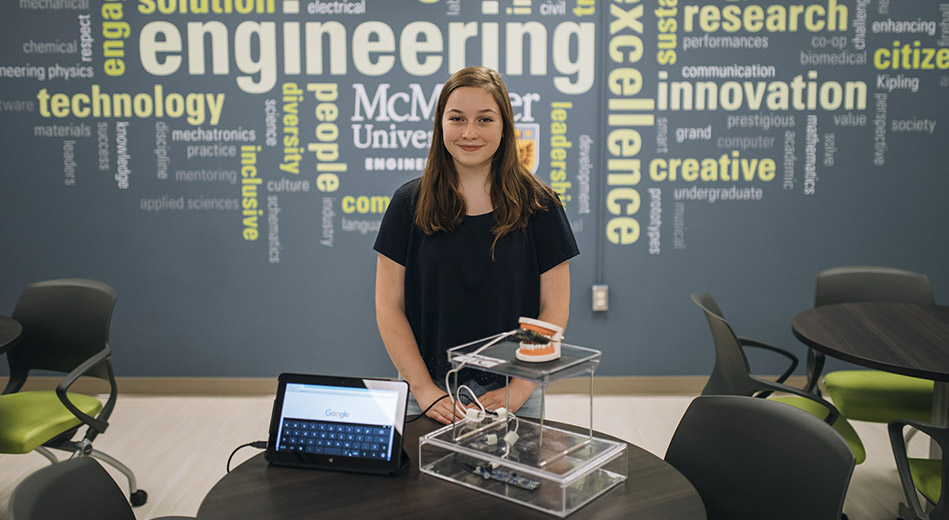 BY Sarah Anstett, Faculty of Engineering

Emma Mogus has built an impressive resume as an inventor and international public speaker, research intern and non-profit CEO, all before leaving high school. The 17-year-old award-winning teen, who is coming to McMaster in September has been making headlines for her innovative assistive technology that enables people with disabilities to direct a computer mouse with their tongue.

The Tongue-Interface-Communication project (TiC) is a simple solution to a complex problem, she said, that was inspired by a friend living with ALS. She developed the device while working as a student intern in McMaster’s Department of Engineering Physics. Mogus equipped a mouth guard with five buttons, which can be easily pressed by the tongue to navigate a mouse on a screen. It connects to a circuit board via an Ethernet cable, which is connected to a computer via a USB cord.

Current tongue-operated assistive technologies usually involve a surgically implanted magnet or a switch. Mogus’ invention is far less invasive and, with a production cost of less than $10, it is significantly less expensive. “A lot of [assistive technologies] cost upwards of thousands of dollars so people in low income areas and developing countries are a lot more vulnerable,” she said. “If I go commercial, I’ll keep it inexpensive. It’s really important to use your skills and talents to make the world a better place.”

Mogus has been fielding calls from the private sector ever since she made national news last week for winning the 2016 Weston Youth Innovation Award from the Ontario Science Centre, which will create an animated showcase of TiC and an enlarged, interactive model of the device will eventually be on display.

Emma is no stranger to the media. Back in 2012, she and her sister co-founded Books with No Bounds, a non-profit organization that sends books, clothing, school supplies, and computers to Indigenous communities in Canada and other communities around the world. For that she was named an Ambassador at the World’s Children’s Prize (akin to a Nobel Prize for youth), and was honoured as the event’s M.C. where she introduced that year’s award winner, Malala Yousafzai. “She has created such a global impact; I want to be just like her,” Mogus gushed, recounting the experience.

Mogus currently works with Ayse Turak in Engineering Physics, a role that continued after landing an internship with the department back in 2015, thanks to TiC. “Emma is one of the most exceptional student’s I’ve seen in a long time, and she doesn’t even go here yet,” said Turak. “She is totally self-driven. She developed this prototype completely on her own, as a side project. I will do everything I can to nurture her abilities and help her along. She is absolutely going places.”

Emma received McMaster’s Schulich Leader Scholarship and will begin her studies in the Faculty of Science in September.

“Even before the internship, McMaster was always a top choice. When deciding between other schools, it seemed really unfair to pick another school because McMaster is really close to my heart. I feel so comfortable here, all the staff and students have given me such a positive experience. There is something different about McMaster, it’s such a welcoming community and I am really excited to be a part of it.”

She plans to continue her involvement with Turak’s research group as much as she can, she said.