The advantages of unionization are obvious, so why don’t more workers join unions? 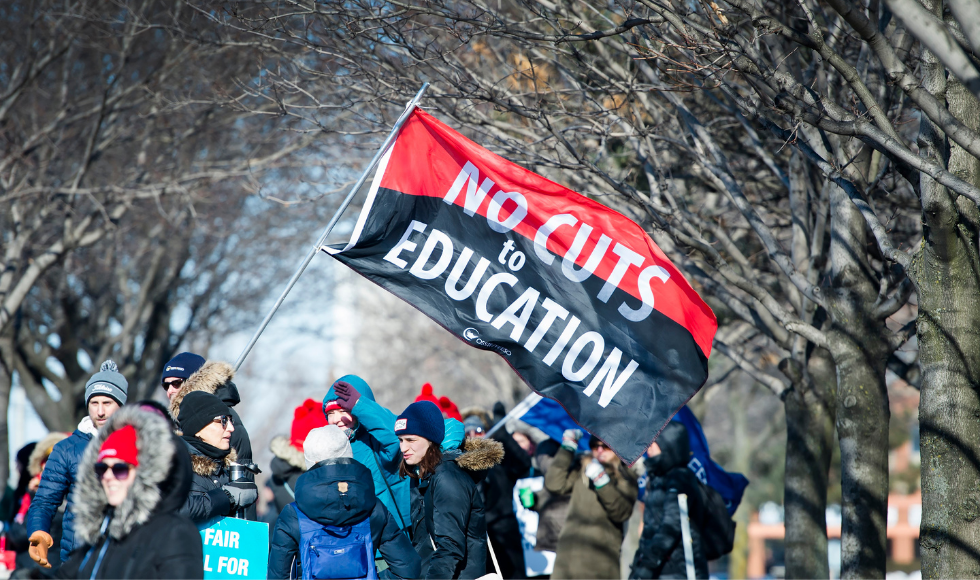 Thousands of teachers from the Peel District School Board hold a one-day strike in Mississauga, Ont., in February 2020. THE CANADIAN PRESS/Nathan Denette

BY Stephanie Ross and Larry Savage

It’s well established that unionized workers earn better wages and have better benefits than their non-union counterparts. Unionized workers also experienced much greater levels of job security during the COVID-19 pandemic. But if the advantages of union membership are so obvious, why are fewer than one in three workers in Canada unionized?

While there’s no consensus about which factors are most likely to sway support for unionization, dissatisfaction with working conditions and the desire for dignity and voice at work are often cited as key reasons why workers seek out unions.

Wanting a union and securing a union, however, are two very different things. That’s because there are enduring obstacles to unionization that make it incredibly difficult for workers to turn their initial support for the idea of a union into reality.

Labour laws play a fundamental role in either helping or impeding unionization. For example, independent contractors and the self-employed are legally excluded from union membership in Canada and, in many provinces, so are agricultural and domestic workers. For workers who can legally unionize, provincial governments — under pressure from the business community — have generally made it more difficult to exercise that right in recent decades.

Employers intent on resisting unionization frequently exploit loopholes in labour law to build opposition to unions within their own workforces. While many union avoidance tactics are illegal, employers are often less fearful of the penalties they may face for engaging in “union-busting” activities than of the consequences of unionization.

Union avoidance is a multi-million dollar business. Lawyers and consultants devise strategies for managers to maintain union-free workplaces. These strategies can include active intimidation and surveillance of union supporters, exploiting divisions within the workforce to stir up opposition to the union or spreading misinformation about the implications of unionization.

These common union avoidance strategies are difficult to overcome, especially given the power imbalance between employers and workers.

Union substitution techniques are the carrots designed to increase worker loyalty to the employer, thus making employees less likely to identify with the union. Some non-union companies operating in highly unionized sectors try to keep wages and working conditions in line with those of unionized workers in an effort to dissuade their own workforces from considering a union.

In recent years, retail giants Target and Home Depot had their slick anti-union videos leaked on social media, providing insight into how much money and effort employers are willing to pour into such initiatives.

Walmart, meantime, uses a “Union Probability Index” to monitor employee behaviour and morale. If a store’s index gets high enough, head office sends teams into the store to ensure it remains union-free. And, as we saw in the cases of Walmart in Jonquière, Que., and Foodora in Ontario, some companies will shut down outlets or operations rather than tolerate a union.

Despite these aggressive union avoidance tactics, public opinion polls indicate that, if given the choice, many non-union workers would opt to unionize.

However, many of these workers, particularly those concentrated in relatively small workplaces in the private sector, simply can’t find a union willing to organize them. Organizing small workplaces is generally cost-prohibitive for unions and rarely results in broader bargaining power for workers in a particular sector.

The lack of union supply, labour relations power dynamics and the union avoidance strategies of employers all work together to dissuade workers from exercising their right to unionize.

This outcome isn’t accidental. It’s no coincidence that the rate of unionization has fallen in conjunction with the passage of anti-union labour law reforms in most provinces. Those reforms have made it more difficult for workers to exercise their legal right to unionize and easier for employers to interfere in union-organizing campaigns.

Governments could certainly change labour laws to facilitate unionization and crack down on employers engaging in union avoidance activities.

Many of the proposals contained in the former Ontario Liberal government’s now shelved Changing Workplaces Review could provide a road map for offering workers the necessary tools to exercise their rights more meaningfully, including a framework for broader based bargaining that would help workers in small workplaces.

Given growing levels of social and economic inequality in the wake of the COVID-19 pandemic, the need to facilitate unionization is more urgent than ever.

This article was written by