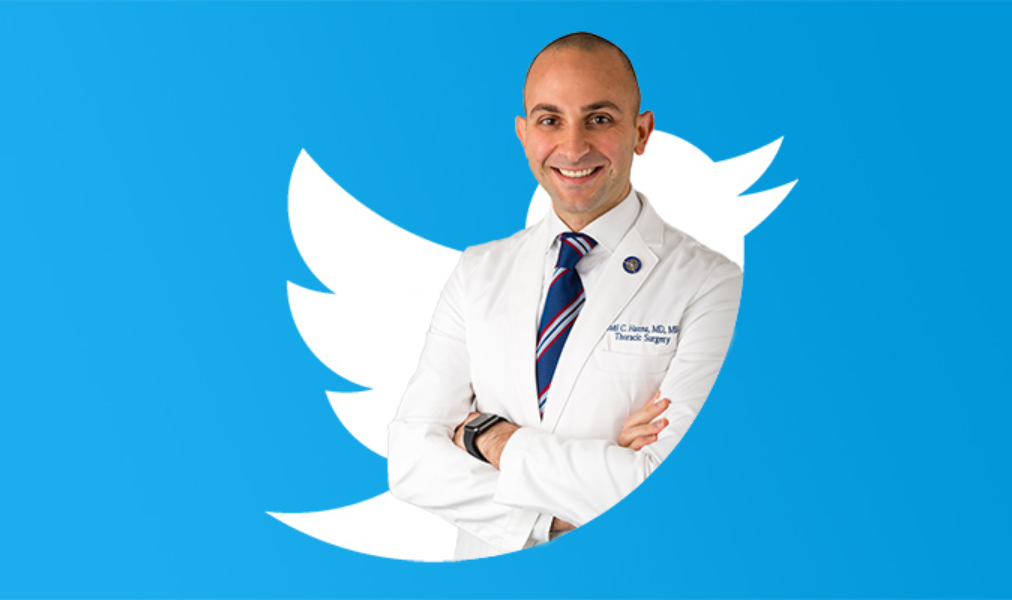 Waël Hanna is an associate professor in the Department of Surgery at McMaster University. (Graphic design by Cameron Taylor.)

According to a study from McMaster University, academic thoracic surgeons who are already on Twitter should choose to share their research in 280 characters if they are looking to get noticed.

A team of researchers at the university found that the more you tweet, the better your research citation index.

An abstract of the study results was shared during a recent poster session at the Society of Thoracic Surgeon’s Annual Meeting in San Diego.

“We started noticing thoracic surgeons who are engaged on Twitter were suddenly getting invited to be keynote speakers at conferences, etc., but there was no information available on their scientific impact except anecdotes and stories,” said Waël Hanna, principal investigator of the study, associate professor in the Department of Surgery, and a thoracic surgeon at St. Joseph’s Healthcare Hamilton. “We decided to look at the correlation between your activity on Twitter and your h-index.”

The h-index, formally known as the Hirsch-index, is a common metric used to evaluate a researcher’s productivity and influence.

More than 3,700 thoracic surgeons registered on CTSnet.org in Canada and the United States were queried for profiles with an h-index on Google Scholar and/or ResearchGate in July 2018. Of the 722 surgeons found with an h-index, 188 were on Twitter, while the remainder of the 534 were not.

The research team focused on the 95 per cent, or 686, on ResearchGate.

Researchers summarized that the Twitter usage of North American thoracic surgeons showed no significant difference in h-index values between those who use Twitter versus those who do not.

However, they also concluded that among surgeons who use Twitter, those who tweet more frequently, follow more people, and have a greater following are more likely to have their research cited by others, and consequently have a higher h-index than their counterparts.

The study with more extensive data has been submitted for publication.

Hanna noted that while the study provides scientific impact, there are still outstanding questions that he hopes others will look to answer.

Regardless, Hanna said the study has made an impact on his own digital footprint.

“I am personally now more active on Twitter,” he said. “I also hired a company to design a website, and help ensure I am uniform in my messaging, branding and identity. My feed is mostly about research related to lung cancer. Patients do follow me and comment on my posts.”

He said that he anticipates that social media, and Twitter, in particular, will become increasingly used by thoracic surgeons to communicate with current and prospective patients in the coming years.

Poster details for the study are available on page 224 of the abstract book here.

Whiplash? There’s a new ebook for that

A team of experts in the Faculty of Heath Sciences has published a comprehensive ebook on a common injury that can require treatment by a wide scope of health professionals.