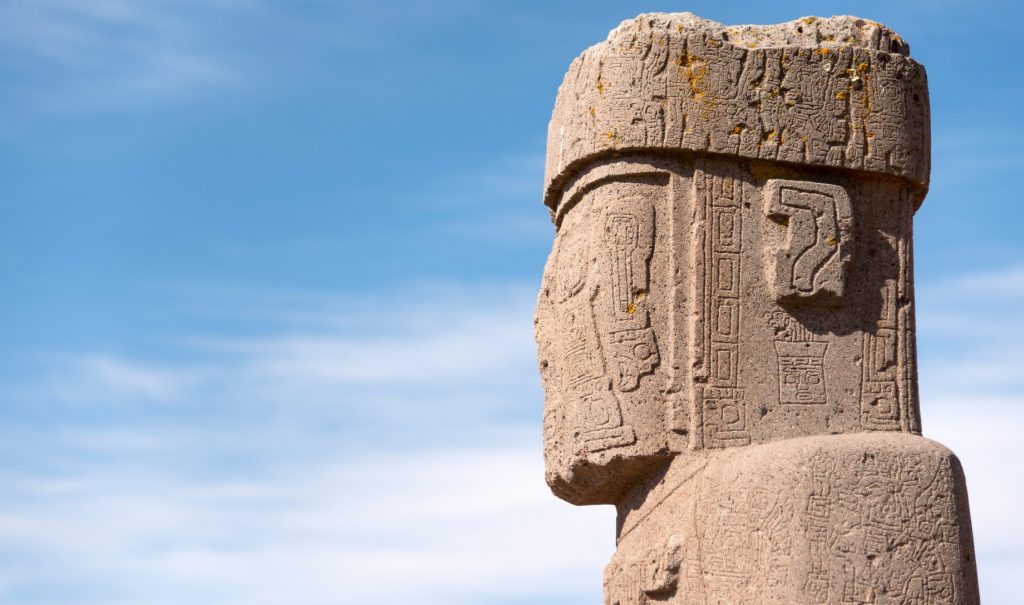 The head of a monumental stone statue from Tiwanaku, Bolivia (Shutterstock)

BY Andrew Roddick and Anna Guengerich

A Global News report on the appearance and disappearance of monoliths.

As archeologists, we watched these events with some amusement. Imposing, isolated standing stones have been important in many historical cultures of the world, from Mongolia to the British Isles.

Our expertise lies in the monoliths of the South American Andes: monumental, human-like figures carved of single blocks of stone that are remarkable not only in their form and style, but also in the stories they tell.

The archeology of Bolivia’s monoliths

The monoliths of highland Bolivia served as the focal point of public religious rituals as far back as 800 BCE and have remained a source of fascination ever since. When Inca armies conquered this area in the 15th century, they saw them as leftovers from the world’s creation.

In the 16th century, the next set of invaders — Spanish conquistadors — were told that they were the work of giants. Over the next centuries, they were dynamited to build railroads, stolen by foreign collectors and even used as target practice by the Bolivian army.

Since the early 20th century, however, a number of new monoliths have come to light during excavations by Bolivian and foreign archeologists, and by local residents during the course of everyday activities such as farming fields and building houses. Many dating to over 2,000 years ago, some quite elaborately carved, have been found throughout the region.

The best known monoliths are those of the UNESCO site of Tiwanaku in Bolivia, a place that was famous in its heyday (400-1000) for attracting pilgrims from across the Andes despite its lung-crushing setting at 3,800 metres above sea level.

Many of these volcanic stone monoliths are intricately carved. The largest of these, the Bennett Monolith — recently returned to its original site — stands a staggering seven metres high. Other smaller monoliths are found scattered around the site, but also in house patios in the modern town.

The opportunity to interact with monoliths may have been the main attraction of Tiwanaku for its religious devotees. For many Indigenous Peoples of the Andes, stones and mountains are understood as powerful beings that can intervene in human lives.

And like the mysterious metal monoliths, the importance of the monoliths is associated with their natural environments. Chemical analyses confirm that the stone for Tiwanaku monoliths comes from mountains that the Aymara people see as sacred, living beings with distinct personalities. In the past, devotees likely sought to interact with these beings in their form as monoliths under altered states of consciousness through drugs, alcohol or musically induced trance.

The principal monoliths of Tiwanaku hold in one hand a drinking vessel — similar to a modern pilsner glass — and in the other a flat tablet for inhaling hallucinogenic snuff.

Archeologists have found both types of artifacts, and even psychotropic drugs, at Tiwanaku and other sites in Bolivia, Chile and Peru.

When Tiwanaku’s government collapsed around 1000, monoliths appear to have borne the brunt of people’s anger. Many were decapitated, defaced or broken apart.

One broken monolith was united in the late 1970s with its other half: the 998-kilogram upper portion was found 220 kilometres away, across Lake Titicaca, and identified via microscopic analysis.

Other monoliths survived, only to suffer under later Spanish invaders, who pried off gold plating and, in some cases, inscribed them with crosses and dates, and ceremoniously buried them.

For many Bolivian Aymara, stone monoliths continue to live in the present. Current residents of the town near Tiwanaku have told our collaborators of monoliths coming to life at night, wandering the streets.

In 2006, Evo Morales — Bolivia’s first Indigenous president — was sworn in at Tiwanaku under the watchful eye of the Ponce Monolith.

Monoliths for this century

In 2007, sculptor Ruben Herrera signed a contract with the municipality of Guaqui to chisel a replica of the Bennett Monolith. He extracted a 20-tonne rock from a nearby hill using traditional techniques. Despite working for 20 months, he was never paid. The monolith remains in its place of production, but is now incorporated into a property wall.

Villagers told the press that Herrera had a sickness caused by the stone entering his body, and he could only be healed by local shamans (or yatiris). Today, people place candles and flowers at the foot of the replica, and yatiris pour grain alcohol on his work.

In our current moment, we are becoming ever more reliant on new and remote technologies. It seems incredible that we still find ourselves entranced by monoliths of metal and stone and the qualities of objects that seem to emerge magically out of the earth.

As archeologists, however, we don’t find this mystifying at all. Artifacts and art like the animate Andean monoliths possess an extraordinary power to capture our attention even as civilizations rise and fall, and remind us of our connections to the places we inhabit.

Andrew Roddick is an associate professor of anthropology at McMaster University and Anna Guengerich is an assistant professor at Eckerd College. This article is republished from The Conversation under a Creative Commons license. Read the original article.

Henry Giroux, the McMaster University Professor for Scholarship in the Public Interest, has released his latest book, Race, Politics and Pandemic Pedagogy: Education in a Time of Crisis.