The science — and business — of squishy physics 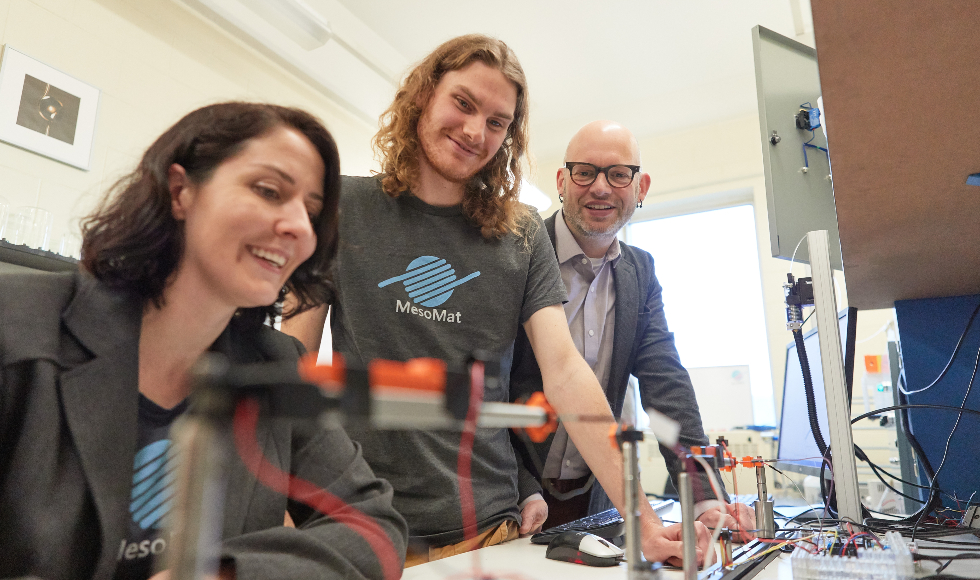 No, really – colloquially, that’s what it’s called. (There are squishy physics research groups from Harvard to UCLA and lots of places in between.)

“In the simplest terms, we study the physics of soft materials,” he explains. “What makes soft materials different from hard materials is hard materials are hard because the intramolecular bonds that hold the material together are really strong. In soft materials, that’s not the case – a small stimulus can have a big impact on them, which can lead to all kinds of interesting properties.”

So people are squishy. Most biomaterials are squishy. Silly Putty is squishy. Dalnoki-Veress and his research group focus on understanding the surfaces and interfaces of these soft materials.

“The materials we look at are both living and dead, but they’re always soft and squishy.”

While Dalnoki-Veress has been doing fundamental research for 20-plus years, largely in the department of Physics and Astronomy at McMaster, his work has also taken a turn for the applied side over the past year. He’s the co-founder of MesoMat, an advanced materials company that grew directly out of the research happening in his lab.

“One of the areas we really focus on is the interaction between soft materials and liquids,” he explains. “Imagine a droplet of water on a spider web – if the fibres are thin enough, and the droplets have the right dimensions and properties, then something like a spider’s web – or a thin plastic yarn – can wrap itself around a droplet.”

It’s a lovely image – but it turns out the principle is useful in practice as well. Dalnoki-Veress’s team discovered that they could use this idea to make micro-sized inductive coils. Further investigations of soft material fibers resulted in stretchable, conductive, plastic-based wires, as thin as the threads that make up a spider’s web.

Dalnoki-Veress and his team realized that an immediate application for their discovery was for wearable tech – sensors embedded in clothing or worn on the body as implants or accessories. A conductive, stretchy wire that could power sensors when woven into fabric would be a big improvement on the current technology, which uses copper wire. While copper is conductive, it doesn’t do well in the wash – a drawback for a tech-embedded running shirt – and isn’t very comfortable. Nor is it particularly stretchy.

And while MesoMat is focusing on wearable tech for now, there’s a wealth of potential for the product. Future projects might include lightweight sensors for airplane wings or turbine blades – applications that need both accuracy and near-weightlessness.

“This foundation of fundamental research gives us such a broad understanding of polymer systems and coatings that our product isn’t really a single product,” says Clare Armstrong, MesoMat’s manager of research and development and a PhD grad from McMaster. “Rather than this being just this one stretchable, conductive fibre, what we’re really selling are ways to integrate these technologies into soft systems.”

MesoMat has met with considerable success since its inception a year ago. This fall, they won the Hamilton Lion’s Lair competition, which not only netted them $76,000 in cash and in-kind services, but put them in touch with a wealth of contacts. They’re participating in a prestigious start-up accelerator in Toronto called Creative Destruction Labs, which has further expanded their network.

“Since we started, we’ve come a long way,” says Paul Fowler, one of MesoMat’s co-founders and Dalnoki-Veress’ former student, both as an undergraduate and as a master’s student. “We’ve developed the technology from a very simple idea and a very basic prototype to something much more sophisticated we can show to potential customers and investors. Right now, we’re in the process of commercializing – trying to close our first paid projects and working on generating revenue.”

None of that would be possible, Dalnoki-Veress points out, without support from McMaster, including investment, lab space and resources, including the help of MILO, McMaster’s Industry Liaison Office.

MesoMat has also been able to give back to the university, in a way, by hiring co-op students – who end up not only learning about the science behind their work, but also about R&D, running a business and being an entrepreneur. And that, says Dalnoki-Veress, is creating a pool of talent that may be likely to stay right here in Hamilton, rather than moving to tech-heavy centres like Toronto or Waterloo.

“We want to have an advanced materials presence in Hamilton that creates novel materials of various sorts,” he says. “There’s an incredible talent pool right here, and many of them want to stay in Hamilton. If we can contribute to growing Hamilton’s presence in industrial materials research, that would be amazing.”