The Science of Star Wars 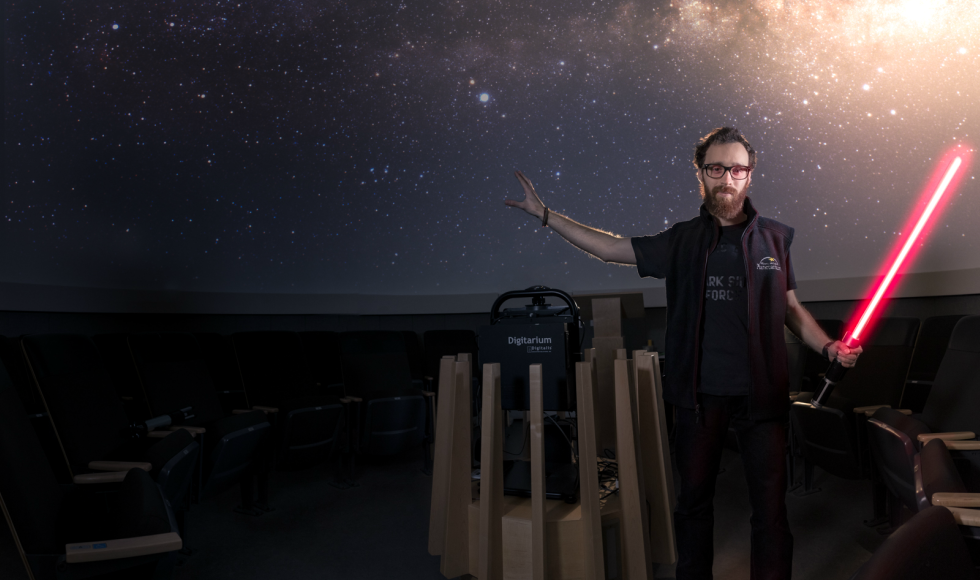 Since the first Star Wars movie opened in 1977, children the world over have been channelling their inner Obi Wan Kenobi – trying in vain to move  objects using the mystical power of the Force.

While it may not be possible to levitate the TV remote using Jedi powers, science tells us that, in fact, there are forces that bind the galaxy together, planets that resemble those found in the Star Wars universe, and that it may – theoretically at least – be possible to build a lightsaber.

And that’s just the tip of the iceberg. According to Thanassis Psaltis, a first-year PhD student in experimental nuclear astrophysics, Star Wars is full of interesting science.

To mark this week’s release of the latest installment of the Star Wars saga, Psaltis who is supervised by Alan Chen, a professor in McMaster’s Department of Physics and Astronomy, recently explored the science of Star Wars in a unique show he created and presented at McMaster’s W.J. McCallion Planetarium:

Can planets found in the Star War universe, like Luke Skywalker’s home planet of Tatooine, exist in our Universe?

The answer is yes! NASA reported two years ago that some planets in the fictional Star Wars universe are similar to scientifically confirmed exoplanets in the real-world universe. Hoth is like OGLE-2005-BLG-390Lb and Kepler-16b – a huge discovery – is a planet rotating around two stars, much like Tattoine.

I think it is important to mention that when Star Wars: A New Hope was made back 1977, where the planet Tattoine was first introduced, these kinds of exoplanets – planets located outside of our solar system – hadn’t yet been discovered.

How much energy would the Death Star require to destroy Earth?

The Death Star is one of the most powerful weapons in sci-fi history. It has the ability to destroy planets in a matter of seconds using its super laser. But what would it take to destroy an actual planet?

The Earth is kept together by gravitational force. The amount of energy the Death Star would require to destroy Earth would be greater than the amount of energy it takes to keep our planet together. To destroy the Earth, it would take the equivalent of about 2.5% of the annual amount of the energy produced by the sun, which is huge when you consider that in just one second, the sun produces 1 billion times the energy humans produce or consume in a year.

Could the Force ever be a reality?

The Force is an energy field that connects all living things in the galaxy. Its two manifestations, the light and the dark side, are used by the Jedi and the Sith respectively. As Yoda says of the Force, “its energy surrounds and binds us.”

While, of course, the force could never be a reality, in a way Yoda was describing something that exists in the universe. We are all connected to the universe mainly because we are made out of the exact same material. Out atoms were forged in the fiery hearts of the stars billions of years ago. We are made out of stardust.

But which are the forces that govern our world? So far, we know four of them: Gravity, the force that keeps us here on Earth and makes the planets revolve around the sun; electromagnetism; and the weak force and the strong nuclear force, the two forces which keep the binding blocks of matter together.

Is it possible to travel through hyperspace like the Millennium falcon?

In Star Wars, hyperspace is supposed to be an alternate dimension that allows for travel faster than the speed of light. In real life without the extra dimensions, we are all bound to travel at sub-light speeds. Albert Einstein told us that this is the speed limit in the universe.

However, there is a hypothetical object that satisfies Einstein’s General Relativity equations that could be a substitute hyperspace travel – it’s called a wormhole.

A wormhole is a shortcut in the fabric of space and time. It’s a bridge between two distant regions connected by black holes. A spacecraft for example can enter from one side and end up in a different spatial location and different time, possibly traveling faster than light speed. But there are three main issues with wormholes: 1) you don’t know beforehand when and where will you end up once you’re inside it, 2) they are very unstable, and 3) you most likely couldn’t survive the intense gravitational field and radiation.

How difficult would it be to navigate an asteroid field like Han Solo did in the Empire Strikes Back?

Asteroids are small rocky objects, with sizes that vary from a few meters to hundreds of kilometers. The largest of them, 1 Ceres, has a diameter of approximately 1000 km.

Most of the asteroids in our Solar System are located in a region between the orbits of Mars and Jupiter, known as the asteroid belt. But the mean distance between these objects is huge – it can be easily calculated that it is around 600,000 miles. So, if Han Solo was in our asteroid belt, he would have had trouble escaping those Imperial TIE fighters!

Could space battles ever be like the ones we see in the Star Wars movies?

Space battles are part of what has made Star Wars so popular. One aspect of these battles that we take for granted is the incredible sound effects. On Earth, sound travels in waves, like heat and light do, however sound travels by making molecules vibrate. In space, the density of matter is very small so sound cannot travel there. So, the only place in the Star Wars movies where sound could really be heard would be inside the cockpits where there is “air”.

Is it possible to create a lightsaber?

First of all, lightsabers are neither made from light nor do they have a saber shape. Light beams cross through each other, so that wouldn’t work for lightsaber battles! We know about solids, gases and liquids, but a nice idea would be to consider the fourth state of matter – plasma.

Plasma is ionized gas, meaning that the atoms have been stripped by their electrons. The Sun is made almost entirely of plasma, with a surface temperature of around 6,000 degrees Kelvin. So, how could we create such a high temperature in our lightsaber? With very strong batteries!

Aliens make up much of the population of the Star Wars galaxy, but we have yet to find other forms of life beyond Earth. Are we alone in the universe? The vastness of our universe suggests that it’s highly possible that we are not alone out there. A well-known astrophysicist, Frank Drake, came up with a now famous equation to calculate the number of broadcasting civilizations in our Galaxy.

By multiplying a number of factors that include star formation and probabilities of planets to be in the habitable zone and thus able to host life, we theorize that there are approximately 10 broadcasting civilizations in our galaxy.

The only issue is that since the galaxy is 50,000 light years wide, and if we assume that the other nine civilizations are equally spread out, if we do detect a signal, it would be from a civilization that started broadcasting 2,000 years ago since that’s how much time takes for the signal to reach us.