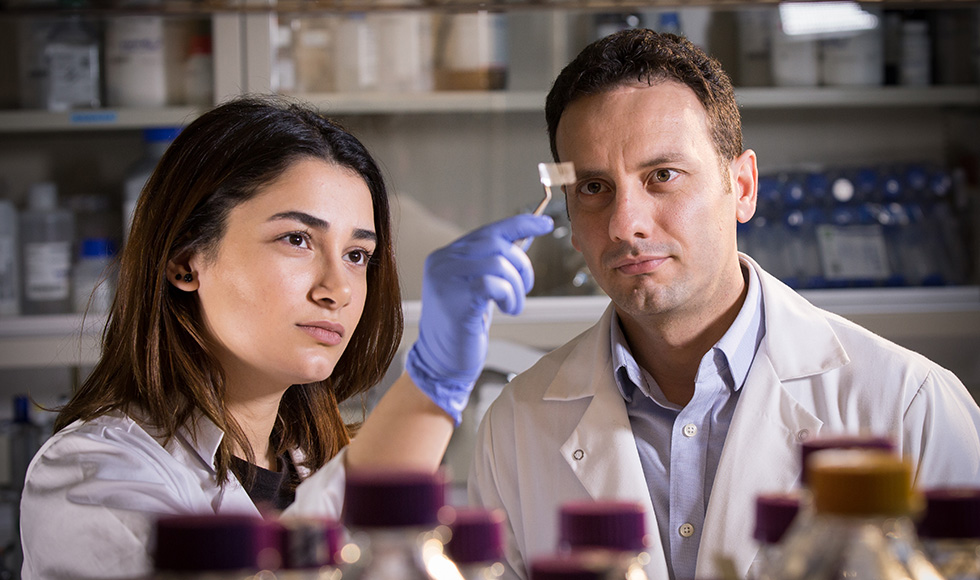 Is that meat still good? Are you sure? McMaster researchers have developed a test to bring certainty to the delicate but critical question of whether meat and other foods are safe to eat or need to be thrown out.

Mechanical and chemical engineers at McMaster, working closely with biochemists from across campus, have collaborated to develop a transparent test patch, printed with harmless molecules, that can signal contamination as it happens. The patch can be incorporated directly into food packaging, where it can monitor the contents for harmful pathogens such as E. coli and Salmonella.

The new technology, described today in the research journal ACS Nano, has the potential to replace the traditional “best before” date on food and drinks alike with a definitive indication that it’s time to chuck that roast or pour out that milk.

“In the future, if you go to a store and you want to be sure the meat you’re buying is safe at any point before you use it, you’ll have a much more reliable way than the expiration date,” says lead author Hanie Yousefi, a graduate student and research assistant in McMaster’s Faculty of Engineering.

If a pathogen is present in the food or drink inside the package, it would trigger a signal in the packaging that could be read by a smartphone or other simple device. The test itself does not affect the contents of the package.

According to the World Health Organization, foodborne pathogens result in approximately 600 million illnesses and 420,000 deaths per year. About 30 per cent of those cases involve children five years old and younger.

The researchers are naming the new material “Sentinel Wrap” in tribute to the McMaster-based Sentinel Bioactive Paper Network, an interdisciplinary research network that worked on paper-based detection systems. That network’s research ultimately gave rise to the new food-testing technology.

The signaling technology for the food test was developed in the McMaster labs of biochemist Yingfu Li.

“He created the key, and we have built a lock and a door to go with it,” says Filipe, who is Chair of McMaster’s Department of Chemical Engineering.

Mass producing such a patch would be fairly cheap and simple, the researchers say, as the DNA molecules that detect food pathogens can be printed onto the test material.

“A food manufacturer could easily incorporate this into its production process,” says Didar, an assistant professor of mechanical engineering and member of the McMaster Institute for Infectious Disease Research.

Getting the invention to market would need a commercial partner and regulatory approvals, the researchers say. They point out that the same technology could also be used in other applications, such as bandages to indicate if wounds are infected, or for wrapping surgical instruments to assure they are sterile.