Tick, tock: the countdown to peak tick season is here 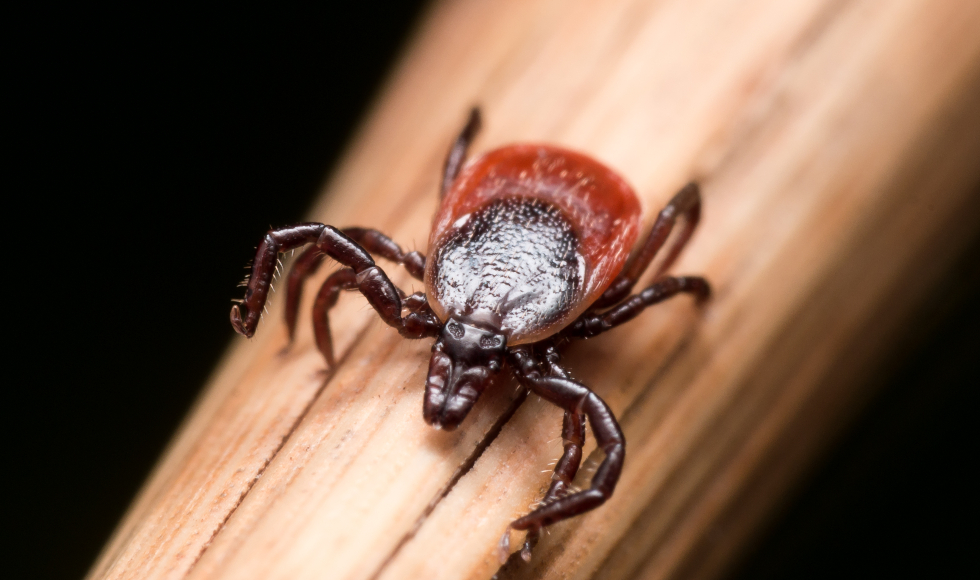 A female blacklegged deer tick crawls along a piece of straw. (Photo by Shutterstock.)

Ticks and some insect pests can carry bacteria, viruses and parasites that may cause disease in humans. One in particular, the blacklegged deer tick Ixodes scapularis, is well-known for its ability to transmit the Lyme disease-causing bacterium, Borrelia burgdorferi.

For the most part, these ticks are inactive throughout the winter and begin to look for their next meal as seasonal temperatures warm up.

But as the global climate warms, it is more likely that some ticks will remain active through the warmer winters and can expand their habitats into new areas. Because of this, hikers and dog owners need to be watchful for ticks year-round to reduce the risks of getting sick.

Ticks and other pests are prevalent in forests during the warmer months, from spring to fall. But where do they go during the winter and how do they survive the cold polar vortexes, inches of snow and frostbite-inducing windchill?

Animals use a variety of strategies to deal with the winter months. While humans layer on clothing and mostly avoid going outside during bone-chilling temperatures, other organisms employ sophisticated behavioural adaptations and biological technologies to face winter head-on.

For the common house mosquito Culex pipiens, hibernation is key to survival. The insect enters a dormant phase (called diapause) allowing it to stay mostly inactive through the winter. The female Culex mosquito, a possible carrier of the West Nile virus, builds up fat stores during the summer and fall that serve as energy reserves and insulation for the winter months. This source of energy is useful for mosquitoes after they seek out and settle down in the human-made structures, sewers and animal burrows that they use as shelter to help them escape subzero temperatures.

Ticks, however, don’t enter diapause and are still able to bite and eat a blood meal under the right conditions. These blood-sucking parasites live close to their host organisms, and can sometimes spend their entire life cycle on one animal. They use a technique called questing to locate a host that will serve as their next blood meal. Ticks station themselves on vegetation such as tall grasses and assume a sit-and-wait position. This allows them to grab onto any warm-blooded creature passing by.

Humans have employed our own behavioural strategies to protect ourselves from ticks during the warm seasons of the year. We do this by wearing long-sleeved clothing and using protective sprays when going on hikes through wooded and grassy areas.

Battle against the bite

One of the main challenges we still face in our battle against the bite is the fact that ticks further adapt their behaviour depending on where they are located in North America.

For instance, blacklegged deer ticks will avoid questing in warmer southern regions such as in South Carolina, where the risk of dehydration pushes them onto the ground, mostly below the leaf litter. In contrast, northern tick populations are less threatened by drying out due to humid conditions, and are more likely to quest.

Interestingly, blacklegged deer ticks also have the ability to quest in temperatures as low as -0.6℃. This means that deer ticks are not limited to seeking out hosts during the warm months alone, but can continue feeding well into the early and late winter. It is therefore important not to lower one’s guard when enjoying the outdoors in wintertime.

Ticks are most active when temperatures rise above 7℃. But don’t be fooled into thinking that ticks simply die when the harsh winter weather kicks in! In reality, deer ticks are likely to survive even the harshest polar vortex.

It is quite common for ticks to cluster in hibernation nests and seek refuge under the layer of soil and ground litter within forests, where the temperature is less likely to fall below zero. In addition, snow cover, which acts like an insulating blanket over ground litter, tends to further insulate ticks from the frigid winter air temperatures.

Much like other cold-tolerant organisms, ticks can also produce an antifreeze protein that helps them tolerate colder temperatures by preventing their blood and tissues from freezing.

Climate change and the warming of our planet have resulted in the expansion of blacklegged deer tick populations to more northern regions of North America, including the the states of Wisconsin and New York and the provinces of Ontario and Québec.

Using climate change models and current tick distribution patterns, we can now predict the impact of future climate change on the migration of ticks and the potential health risks that these populations carry across Canada and the United States. For example, the geographic distribution of the blacklegged tick is projected to expand and cover most of Atlantic Canada and Manitoba by the year 2070.

It is very likely that all seasons can be a tick season in some regions. This makes it especially important to engage in continued vigilance in spotting and avoiding these tiny pests, even when out for a walk during the winter months. If your dog disrupts a patch of nested deer ticks for example, it could bring home some unwanted guests.

So, what can we expect as the weather warms up and as long winter nights transition into sunnier spring days? You can be certain that a large number of ticks that were around last season likely survived this winter. They are simply waiting for the right cues — warmer temperatures and longer daylight hours — to emerge and begin their quest for their next blood meal.

Can the antibodies in the blood plasma of COVID-19 survivors help others suffering from the disease? A McMaster researcher is at the forefront of one of the world’s largest clinical trials of a potential treatment for COVID-19.

The N95 respirator masks should be preserved for health-care workers involved in inserting breathing tubes for patients with COVID-19. More common medical masks are fine for all other COVID-19 treatment, says preliminary research from McMaster University.