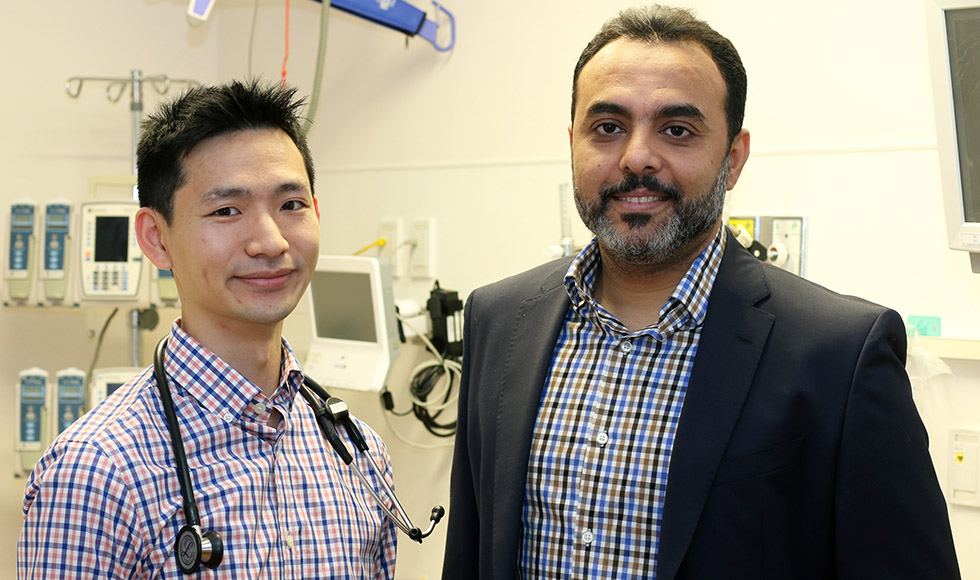 Derek Chu, left, McMaster University clinical fellow, and Waleed Alhazzani, assistant professor of medicine at McMaster, led a study published in The Lancet on oxygen use in adult patients.

McMaster researchers have found there is such a thing as too much oxygen for acutely ill adults.

Extensive data analyses in a study from the university show that supplemental oxygen, when given liberally to these patients, increases the risk of death without improving other health outcomes.

The results were published in The Lancet.

“Supplemental oxygen is administered to millions of acutely unwell patients around the world every day,” said Waleed Alhazzani, senior author of the paper, assistant professor of medicine at McMaster and an intensive care and general internal medicine staff member at St. Joseph’s Healthcare Hamilton.

“Despite this, there is a striking lack of definitive, high-quality evidence related to this common intervention.”

The McMaster-led team of researchers searched electronic academic databases from their inception through to October 2017 for randomized controlled trials done worldwide which compared liberal versus conservative oxygen therapy and death rates, as well as impacts on such aspects as disability, infections and hospital length of stay.

Data analysis demonstrated that, compared to the conservative strategy, liberal administration of oxygen resulted in increased in-hospital death by 21 per cent. Additional analyses suggested that the more supplemental oxygen patients were given, the higher their risk was for death. However, the incidence of other conditions, such as infections or length of hospital stay, were similar between the two groups.

The researchers estimated one additional death for every 71 patients treated with a liberal oxygen strategy.

“Our findings are distinct from the pervasive view that liberal oxygen therapy for acute illnesses is at worst, harmless,” said Alhazzani.

The results of the study, called Improving Oxygen Therapy in Acute-illness (IOTA), have immediate and important implications for health-care providers, policymakers and researchers, say the authors.

“Prior practice guidelines and medical directives on oxygen therapy for acute illnesses have been inconsistent,” said Derek Chu, first author of the paper and a McMaster clinical fellow.

“Our results provide much-needed clarification by showing, with high-quality evidence, that administering too much supplemental oxygen increases mortality among a broad range of acute illnesses.

“Currently, patients are frequently given supplemental oxygen and at excessive levels. A simple change to current practice – being more moderate and cautious with how much oxygen is administered to acutely unwell patients – could save lives.”

There was no external funding for this study.