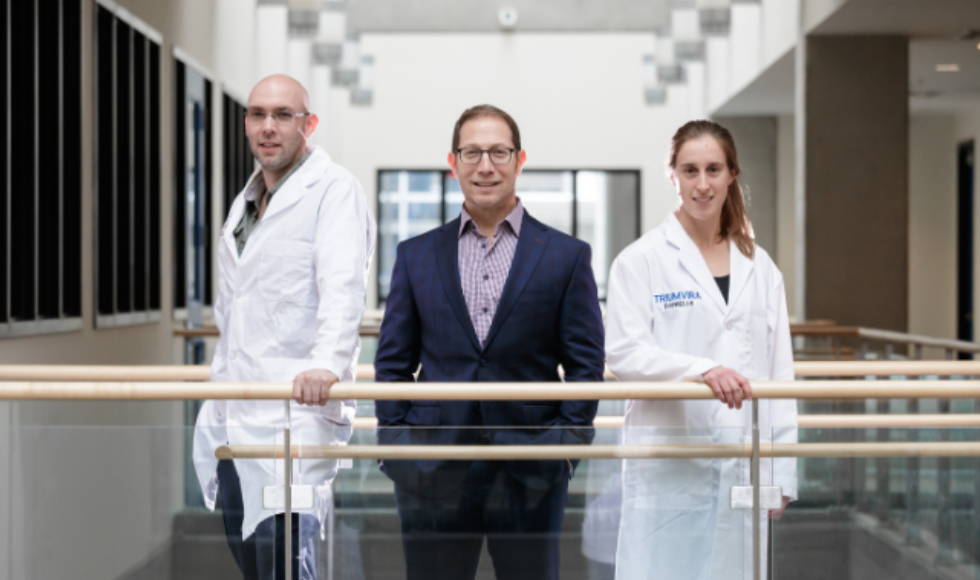 A Hamilton biotech firm started at McMaster University is developing a next-generation immunotherapy treatment to tackle solid-cell cancers, and the company is rapidly growing.

Triumvira Immunologics Inc., co-founded at the end of 2017 by professor Jonathan Bramson and then post-doctoral fellow Christopher Helsen, has already raised more than $100 million in venture capital funding in 2022, seven years after the company’s launch.

Triumvira is developing TAC-T cells, a therapy that primes the body’s own immune white blood cells to detect and attack solid cancer tumours. Existing immunotherapy treatments are geared towards ‘liquid’ cancers such as leukemias and lymphomas.

“There is great reason to be enthusiastic and people want to bet on winning horses. The more success we have, the more people will invest,” said Bramson, who sits on Triumvira’s scientific advisory board. He is a professor of medicine and vice-dean, research for the Faculty of Health Sciences.

“A positive outcome from a clinical trial will spur further investment and growth.”

Company CEO and president Paul Lammers says Triumvira is now running its first clinical trial of nine patients, run by experienced oncologists. It is drawing in researchers from universities across North America, including MD Anderson, the University of Chicago and Princess Margaret Hospital.

“I have three daughters and I tell them the most important thing in your professional career is to have a job where it’s fun to go to work every day and make a difference in a patient’s life,” said Lammers.

“In this case it’s taking on cancer, and who doesn’t want to try to find a solution to it? That’s really exciting.”

Competing for capital and talent in a red-hot global market

Triumvira currently employs 71 people, 37 full-time in Hamilton at its 6,500 square-foot facility at the McMaster Innovation Park (MIP). Its other employees are based in the United States, including about 12 at its corporate headquarters in Austin, Texas.

Lammers expects that Triumvira will expand to 80-85 people by early 2023.

He said one secret to Triumvira’s success is its employees’ ability to work remotely from across North America.

Lammers said this removes the obstacle of relocating and uprooting oneself and one’s family, which he described as the “biggest obstacle,” to bringing new employees on board.

“We did social distancing before it even became an issue,” he said.

Lammers joined Triumvira on Jan. 1, 2018, after meeting Bramson in his McMaster lab in 2017. Lammers brought more than 30 years’ work experience in the American pharmaceutical and biotech sector with him.

The first step was building a team of both scientists and business leaders. It also meant moving out of Bramson’s academic lab into the MIP. There, Triumvira had access to two labs and dedicated office space.

This allowed Triumvira to keep expanding, hiring cell therapists and expanding from just two people in 2018 to 17 by 2019. The company continued growing through the pandemic, hiring people on both sides of the border.

“If we are successful, it would be an amazing legacy for Triumvira and McMaster as a research university,” said Lammers.

Bloom Burton’s president and CEO Brian Bloom, who is also a Triumvira board member, said his firm put together the business plan for Triumvira’s expansion that allowed it to raise $100 million in funding earlier this year.

When launching a biotech start-up, Bloom Burton places its members on the board of directors, but slowly withdraws them as the new firm grows.

Bloom – who has strong links with McMaster, both as a 1998 biochemistry graduate and as the recipient of the 2017 McMaster University Distinguished Alumni Award in Science – said Bloom Burton’s efforts are already paying off, with positive immunological responses in patients receiving TAC therapy in the clinical trial.

Triumvira’s continued success is essentially “a numbers game,” he said. With more capital invested, Triumvira will be able to keep expanding, test new drugs, expand its product line beyond TAC-T cell therapies and maybe even run its own manufacturing facility.

While ambitious, Bloom is confident­­­­­ rapid expansion is possible, pointing to Moderna’s pre-pandemic status as a small company, now a global giant thanks to its COVID-19 vaccine.

For Bloom, it is even more significant that Triumvira’s success is being driven by a Canadian biotech firm co-founded by McMaster researchers and graduates, competing for capital and talent in a red-hot global market.

“It is really what we live for,” said Bloom. “I am truly proud.”

Triumvira’s rapid growth is being matched by other Hamilton-area biotech firms founded by McMaster researchers, such as Fusion, which specializes in next-generation radiotherapy treatments, said Bloom, noting that such firms are hiring increasing numbers of McMaster graduates, growing jobs locally and helping to stem the ‘brain drain’ of Canadian scientists to the United States.

While Hamilton is not displacing the American biotech hubs of San Diego or Boston, its concentration of local McMaster talent could see it become the second or third biggest Canadian centre, he said.

“Hamilton happens to be in a position where a good handful of Canada’s best biotech firms are, from McMaster, rooted here,” said Bloom. “As our industry grows, it is about Hamilton taking its rightful piece of that global pie.”

Karen Mossman, McMaster’s vice-president, research, and chair of MIP’s Board of Directors, says Triumvira is a shining example of the University’s talented and entrepreneurial research community, and has been instrumental in building Hamilton’s reputation as a biotech research and innovation hub.

“McMaster is home to so many incredible research teams that have successfully transferred their discoveries to the global market – and Triumvira is one of our stars in this arena, she said. “Jonathan had the foresight to get his team’s research into the hands of those who could put it to its best use and, in return, they’re advancing cancer immunotherapy options for patients around the world.

Helping oversee the science behind the business is company co-founder Christopher Helsen, now executive director of research and development at Triumvira.

He said that TAC technology is a multi-domain chimeric molecule, meaning it is engineered from two or more components to create a new biological agent.

“We believe TAC will become an essential tool for safely and effectively treating patients with liquid and solid malignancies,” said Helsen.

“For a scientist it is exciting to be the first human being on the planet to experience the creation of a new idea,” said Helsen. “We were fascinated about the potential that the TAC technology presented.”