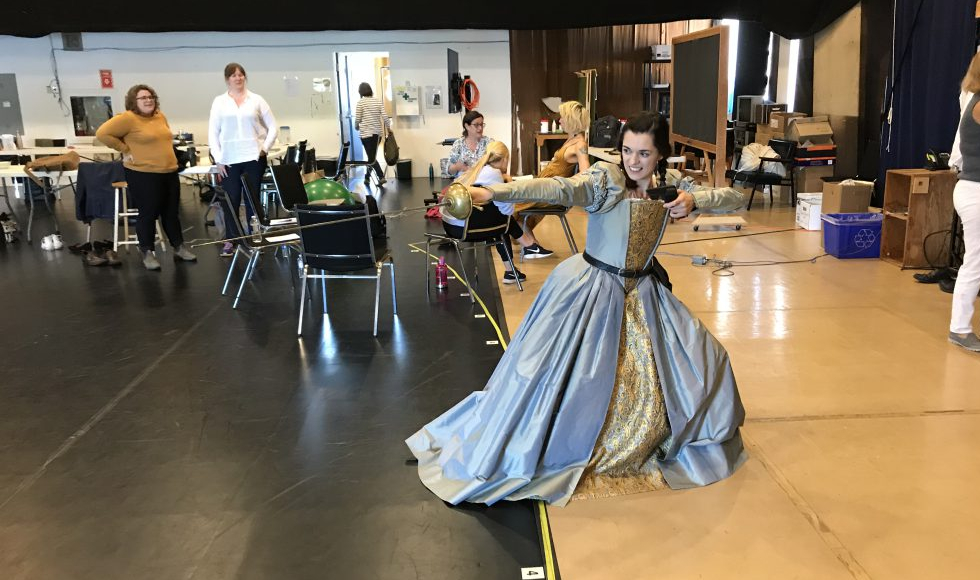 That tend on mortal thoughts, unsex me here,

And fill me from the crown to the toe topful

In Act 1 of Macbeth, Lady Macbeth, sensing her husband’s shaky resolve in committing murder to secure the crown of Scotland, asks spirits to “unsex” her ‑ to take away the “weaknesses” associated with being female.

Popular conceptions of contemporary theatre in Shakespeare’s time – think Shakespeare in Love, for example – are of an all-male domain following a strict gender binary of men’s roles and women’s roles. Lady Macbeth’s famous speech would have originally been performed by a “boy actress”: an adolescent male apprentice who would, as his voice changed and body matured, move into performing male roles.

Women were completely absent from the stage in Shakespeare’s time – or were they?

Two McMaster researchers – and an international team of scholars and actors – are working to show both the scholarly world and the theatre community that Shakespeare’s all-male stage isn’t the be-all and end-all of early modern theatre.

Not just an all-male stage

“Gender and how gender was performed on stage was more exciting and complex than our simple idea of an all-male Shakespearean stage at Shakespeare’s Globe,” explains Melinda Gough, an associate professor in McMaster’s department of English and Cultural Studies and graduate program in Gender Studies and Feminist Research. “What was happening in England wasn’t happening in a vacuum – and on the Continent, female actors not only played female characters on stage, they also often had artistic and financial control of theatre companies.”

Gough and her colleague Peter Cockett, an assistant professor in the School of the Arts, have embarked on Engendering the Stage, an international project examining issues around the portrayal of gender in early modern theatre. The project involves collaboration between academics and professional theatre practitioners – including those from Ontario’s Stratford Festival — and combines traditional research in early theatre history with “Performance as Research,” which is a form of inquiry that uses the artistic process – the actual making of art – to inform research questions and outputs.

Earlier this fall, Gough and Cockett began their work with five days of workshops in the Stratford Festival’s Laboratory, a platform for developing new plays and experimenting “with diverse approaches to staging the classics.” Held in conjunction with the department of English and Cultural Studies’ John Douglas Taylor Conference, the workshops brought together 15 scholars, 10 actors from the Stratford Festival’s 2018 company and four guest artists to stage scenes from four plays from the early seventeenth century, all of which featured “sword-wielding” female characters.

“Our goal was to rehearse these scenes in an open, experimental, playful way, but we also experimented with how the actors might change their bodies when they’re playing a man and when they’re playing a woman,” explains Cockett. “How does history suggest early modern actors understood ‘masculine’ and ‘feminine,’ and how does that relate to our understanding? We worked on establishing a physical binary to start, then played with that and saw how the texts broke that binary down.”

For Keira Loughran, who organizes Stratford’s Laboratory, both academics and actors were able to learn from each other.

“There are practical things in the work itself that scholars are less aware of or experienced with, and there’s knowledge that scholars have that we’ve found to be refreshingly exciting for actors who are interested in engaging that that part of the work,” she said. “Any opportunity to build connections between scholars and artists is really useful, particularly when you’re tackling social issues like #metoo or diversity in casting,” she says. If we work together, maybe we can make some headway.”

Bringing the work back to Mac

Following the workshops at Stratford, Gough, Cockett and their colleagues returned to McMaster for a day of public presentations and discussions, culminating in an evening forum. Held in partnership with McMaster’s Socrates Project, the forum explored issues around non-traditional gendered casting with actors Seana McKenna and Martha Henry, both of whom were cast in traditionally male roles at Stratford this season – McKenna as Julius Caesar and Henry as Prospero.

“I think this subject is extremely timely,” says Rina Fraticelli, the director of the Socrates Project. “When Shakespeare wrote, women’s roles were played by boys, so what the audiences saw was a man’s idea of a woman, according to another man’s idea of how a woman moves and acts and speaks. When Martha Henry performs Prospero as a woman and a mother and Seana McKenna performs Julius Caesar as a man, it raises questions about who we are versus how we’re represented, and the tension between the two.”

For Gough and Cockett, the complexities of the past inform the practice of the present, setting a precedent for creativity and openness when it comes to thinking about gender.

“By going to the past, we’re discovering that there’s a lot of support for more roles for women, for opening up male roles for women,” says Cockett. “This isn’t a radical diversion from what was happening when these plays were written – it’s actually more in line with what happened in the past.”