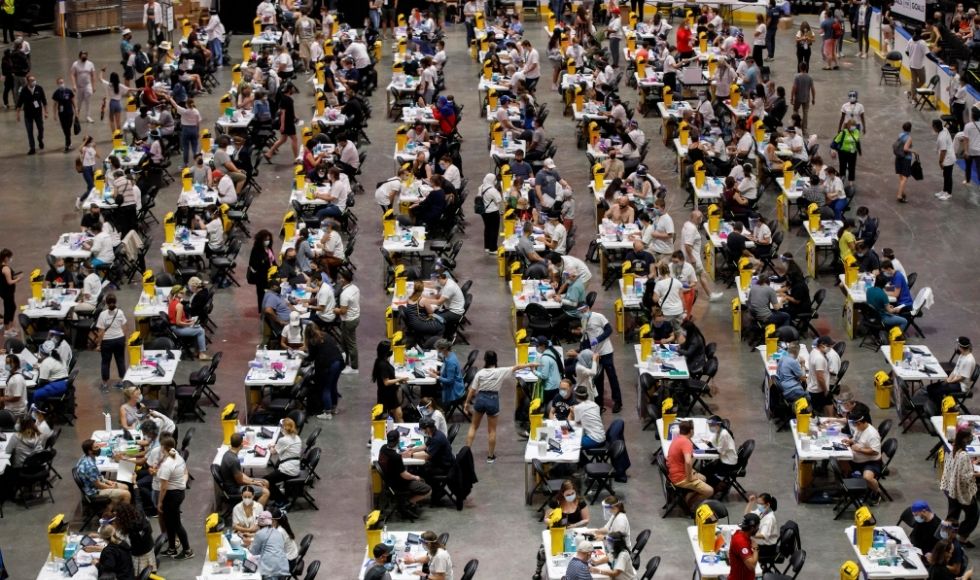 People receive a dose of the COVID-19 vaccine at a mass vaccination clinic at Scotiabank Arena in Toronto in June 2021. (The Canadian Press/Cole Burston)

Since the start of the COVID-19 pandemic, we’ve all had questions about vaccines. Will a vaccine against COVID-19 be found? Will it be effective? When will the vaccines arrive? When will it be my turn to be vaccinated? And most recently: Will the reluctance of some to be vaccinated hamper our efforts to bring the pandemic to an end?

From the outset, evidence suggested most Canadians intended to be vaccinated. In February, as vaccines became available, we and our research partners completed the first of two representative national surveys of more than 5,000 Canadians. Three in four said they would “definitely or probably” get their shot — an encouraging start.

Since then, the situation has become more encouraging. When our second survey was conducted in June, the proportion of Canadians who had either already been vaccinated or who definitely or probably intended to do so had risen to 82 per cent. The hesitant group had fallen to 18 per cent. This is the good news: as more people get vaccinated, the number of vaccine-hesitant Canadians is falling.

Importantly, the decline was among those who said they probably would not get vaccinated or who did not commit either way. This shows public education and outreach have changed minds.

Vaccine hesitancy has also declined more for women than men — exactly where progress was most needed. In February hesitancy was higher among women (29 per cent) than men (20 per cent). The situation has since evened out: the more recent survey finds that hesitancy among men is more or less unchanged (18.5 per cent), whereas among women, hesitancy has fallen by more than 10 percentage points to 16.5 per cent.

Indigenous people and younger adult Canadians (between the ages of 18 and 24) have also become noticeably less hesitant. While younger Canadians were last in line for the vaccine, they are currently less resistant to being vaccinated than their middle-aged counterparts.

And while Indigenous people appeared more hesitant than Canadians in February, this is no longer the case — although the decline in hesitancy seems sharper among those who identify as First Nations, and especially Inuit, than among Métis. The Inuit experienced one of the biggest changes in the country, with a dramatic increase in their acceptance of COVID-19 vaccines in concert with accelerated vaccination campaigns in the North.

The role of ethnic, racial identity

Ethnic or racial identity is somewhat of a factor in Canada, although many racialized groups are more, not less, positive about being vaccinated. Canadians of south or southeast Asian, Chinese, Filipino, Japanese and Korean descent are especially keen — very few expressed reluctance to be vaccinated.

Black Canadians, by contrast, are more reluctant, but only slightly more so than Canadians who identify as white. And that gap closes once other factors, such as age, education or income, are taken into account.

Immigrant Canadians, including recent immigrants, were less likely than non-immigrants to express hesitancy, and this difference persists even after adjusting for age, income and education. All of this is more good news for the vaccine rollout in Canada.