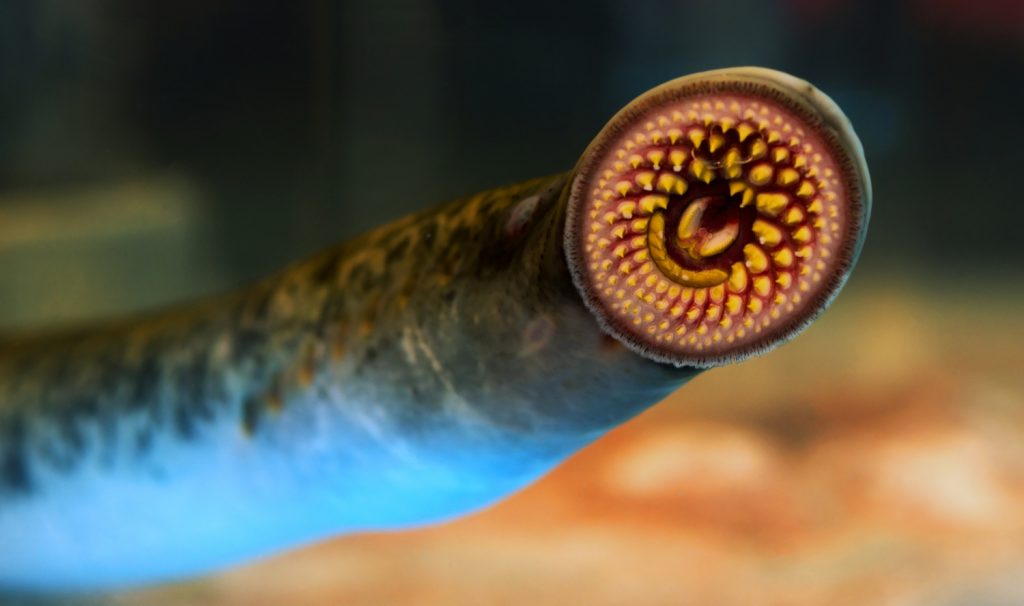 Many people living near the Great Lakes have forgotten what a sea lamprey is. (Shutterstock)

Oana Birceanu is an NSERC Post-doctoral Fellow in the department of biology. This article is republished from The Conversation under a Creative Commons license. Read the original article.

A sea lamprey has no jaw, no proper teeth and no bones. Yet this predator can attach like a suction cup to a fish 100 times its size, use its tongue to burrow a hole into its side, liquefy its tissues and eat it.

A single lamprey can kill up to 20 kilograms of fish in just two years. On this fishy, bloody diet, a young lamprey weighing five grams will grow 40 to 50 times larger by the time it becomes an adult. And there are thousands of these vampire fish in the Great Lakes.

Are you horrified yet?

I am not, and here’s why: the Sea Lamprey Control (SLC) Program has the situation under control.

The SLC is one of the most successful invasive species management program in the world. It is so successful that those of us living in the Great Lakes basin have forgotten what a sea lamprey is. That is an extraordinary thing, because it means that the scientists are doing their job.

As a fish physiologist and toxicologist who has worked on SLC projects for many years, hearing about such a success makes me very happy. My work and that of my colleagues is having an impact! But is forgetting about the sea lamprey a good thing?

How did the sea lamprey become such a successful invader? The first ones arrived in Lake Ontario in the 1800s, making their way from the Atlantic Ocean, through the Hudson River, following the Erie Canal. They remained in Lake Ontario for over a century because Niagara Falls barred them from moving any further.

Once the Welland Canal was modified by mid-1900s, allowing ships to circumnavigate Niagara Falls, the sea lamprey population boomed. They had finally gained access to the upper Great Lakes. Suddenly, lampreys had more space, found more food and colonized more spawning grounds. The invasion had begun.

Sea lampreys are quite fertile (like other invasive species) and have a unique life cycle — for a fish. One female can lay 40,000-67,000 eggs, and they do it in almost every stream and river that drains into the Great Lakes.

Those eggs hatch into larvae, called ammocoetes, which are eyeless, worm-like creatures that burrow in the sediment, making it impossible for predators to find them. The ammocoetes live like this for many years, feeding on algae and decomposing matter, until they are big enough to transform into the sucking predator we love to hate.

When the lamprey invaded the Great Lakes, lake trout — their preferred food and once a top predator fish — were transformed into Swiss cheese and began dying out.

Alewives, small fish that lake trout ate, were no longer preyed upon. They became so abundant that every year there were massive die-offs in the lakes, and millions of dead fish would wash out on the beaches.

Imagine walking on Toronto Islands, on a midsummer’s day, and seeing a fish tsunami coming towards you from all sides. That is what the Toronto waterfront looked like at that time. Now imagine the smell that came with it.

In the 1950s, Canada and the United States established a partnership to tackle the sea lamprey problem. And so, the Great Lakes Fishery Commission (GLFC) came to be. Today, the GLFC helps manages the US$7 billion Great Lakes fishery through research and lamprey population control.

How do scientists control the sea lamprey population? They use barriers and dams to stop the adults from spawning in rivers and streams, release attractants or repellents during the spawning season to guide the adult lamprey into traps, sterilize lamprey males and release them to compete for females, and they apply pesticides, or lampricides, to streams to kill the larvae, without harming other fish.

Without these control measures, the lamprey would be back on top of the food chain and the Great Lakes fisheries would collapse once more.

A look to the future

The Great Lakes basin is changing. The climate is getting warmer, which means that lampreys are moving to new, pristine, previously colder and sea-lamprey free habitats. Some of the barriers and dams that once kept lampreys out are deteriorating, while others are purposefully removed to improve native fish passage.

Field scientists who know the sea lamprey inside and out say that the best control measure for invasive fish species is concrete: barriers and dams. Research on novel fish passages and ladders, man-made passages designed to allow migratory fish access to rivers for spawning, is underway and the results look promising.

The new FishPass project in Traverse City, Mich., provides the best of two worlds: it keeps adult lamprey away, but lets native fish species pass through to reach spawning grounds. In addition, it provides a recreational heaven for locals, tourists and all those kayaking enthusiasts.

Next time you are out fishing on the Great Lakes, enjoying the waves and the breeze while a meter long, 10-15 kg lake trout is tugging on your line, remember that those fish almost disappeared 60 years ago and the harbour was full of dead alewives.

With new invasives like Asian carps and round gobies threatening our native fish species, it is important to not forget the past and to plan for the future.

Remember what a sea lamprey is, because those who are currently controlling their populations are the experts who will be protecting your fishing waters from those invasive species that are knocking at the Great Lakes door.

Oana Birceanu is an NSERC Post-doctoral Fellow in the department of biology at McMaster University. This article is republished from The Conversation under a Creative Commons license. Read the original article.

Climate warming is allowing plants to grow for a longer period of time during each growing season. What we don’t know is how long can we count on.